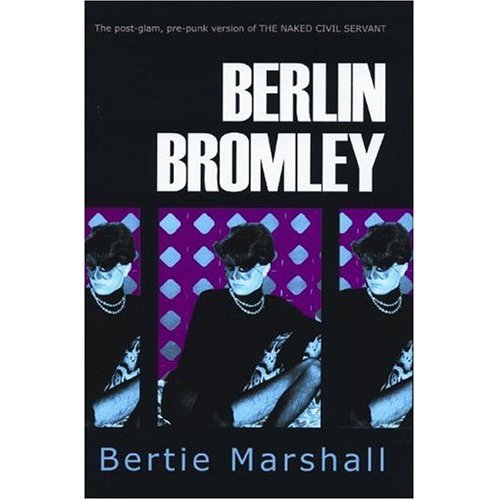 “Oh, Bertie, when are you going to write your memoirs?” asks punk academic Jon Savage at a chance meeting with the author in Berlin. Berties replies: “Oh, I don’t know, Jon… what would I write, a teenage boy lost in suburbia, prostitution and drugs?”

This, you’ll be glad to hear, is exactly what we get in Berlin Bromley (SAF), a “post-glam, pre-punk version of The Naked Civil Servant”. This memoir consists of the day-dreamy reminiscences of a pathologically, fabulously narcissistic 15 year-old-boy, perpetually trapped inside 1976 and his own lip-glossed, suburbohemian delusions. He re-christened himself Berlin after reading too much Isherwood and tried to re-create the Weimar Republic in Bromley, Kent — and came perilously close to succeeding.

This is the gloriously pointless autobiography of a boy who never really did anything but take Mandrax, wear lots of make-up and turn tricks. A boy who was in at the birth of punk, but somehow managed to absent himself when it threatened to get too real. A boy who should have been the leaderene of the New Romantics, a movement he personally prefigured, but who told Steve Strange “it’s not gonna happen”, and went back to Bromley just before it spectacularly did, to take some more Mandrax and daydream his life away (with the odd side-trip to hardcore Earls Court gay cruise bars).

Next to Bertie Marshall’s passivity, Quentin “if you like…” Crisp looks like a particularly perky contestant in The Apprentice. Still, it’s a bonus that he spends as much attention on his writing as he once did on his eyeliner. No one is more aware of his gloriously wasted life than Marshall. His honesty is as breathtaking as Marshall’s profile used to be. Even if you find yourself wondering whether honesty and truth aren’t always quite the same thing (Marshall is also a novelist), you’re left with a clear sense that a life spent as a passive observer, even of your own life, can make for powerful prose.

Essentially, Berlin has one main claim to fame. You might not have heard of him, but you’ve probably heard of that party, held in the mid-Sevneties at his mum’s semi-detached in Bromley while she was away. It was attended by his friend Siouxsie Sioux in plastic Ribena apron and fishnets (and nothing else), taking welts out of the artex ceiling with her cat-o-nine-tails, the rest of the Bromley Contingent mouching around, and the Sex Pistols shagging everywhere (save Johnny Rotten, who just snorted speed and grinned a lot).

The climax of the party, and possibly of Marshall’s life, is where the next door neighbour, a little old lady called Mrs Hall, leans on the doorbell to complain about the music. Marshall hides behind SS’s fishnets and plastic apron strings while she answers the door and spits: “Oh, fuck off.”

Trouble ensues when Mrs Hall, “trembling with fear and rage, eyes filling up behind her Fifties fly-away glasses,” calls Sioux a “little slut”.

“How dare you call me a slut, you f****** old c***!” snaps Sioux. “[She] leant forward and gave the old bag an almighty slap across the face, knocking her glasses into the nearby privet hedge.”

The most famous moment in Marshall’s life happens at the age of 15, on page 58. And he’s observing it from behind SS’s fishnets.

Personally, I wouldn’t have Berlin, or Bromley, any other way.