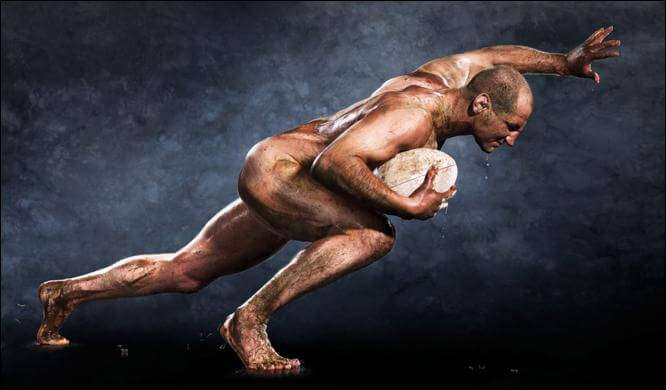 Now that’s what I call pushing back.

Taking the sporno trend to parts it hasn’t yet reached – and what parts! – while spreading the famous French ‘pro’ tartiness of the Dieux du Stade calendars to these shores, the latest ad campaign for Powerade’s ‘InnerGear’ isotonic sports drink features several UK pro rugger buggers in the buff snapped by the photographer Alan Clarke. Including, most spectacularly, most spherically, England Rugby Union Captain Steve Borthwick (above), keeping his spornographic end up for the Queen.  And nicely stuck out.

Once again, it seems that it isn’t just me who is undressing athletes with my eyes and giving them filthy directions. Advertising is doing it too. But unlike me, advertising can actually afford them.

But I’m not bitter. Honestly. I’m sure that Borthwick was rewarded handsomely by Coca Cola (who own Powerade) for his bare-faced cheek, but nevertheless he also deserves, as Julian Clary would put it, a warm hand on his entrance for his bravery. Apparently his mates have been giving him stick for it in the locker room: ‘It is one of the most daring shoots I’ve been involved in,’ he told the ladies and gentlemen of the press,  ‘but it has been loads of fun, even it it has given my team mates plenty of ammunition for changing room banter.’

I can’t help thinking though that the shoot would have been even more daring and fun if Borthwick had been portrayed, along with his bantering team mates, in an actual naked scrum instead of doing a muscular Marcel Marceau. For the purposes of realism, of course.

‘The InnerGear for an athlete – how we train, what we eat and drink – is as important as what we wear,’ says Borthwick, clearly reading here from Coca Cola’s script. ‘And it’s great that this campaign brings it to life’.

I’m sure Coca Cola chose the name ‘InnerGear’ for entirely innocent and pure reasons, and that none of their models would ever use banned substances, but if some young men think that by drinking an overpriced sugary-salty drink invested with magical, virile properties by advertising they’ll get buff instead of fat, and look as desirable as these pro athletes, that can surely only help sales.

Below, England International Paul Sackey and Welsh International Shane Williams who also feature in the InnerGear campaign, prove that really fit bubble-butts can fly. Williams, who looks a little like a Welsh statue of Eros with a rugby ball let loose instead of an arrow, also proves that really fit bubble-butts can arch and look over their shoulder at the same time.

It’s true that this public campaign, unlike the DDS calendars (which are for private consumption, after all), avoids frontal nudity, but then Freud thought that in dreams flying had a phallic symbolism.

So with InnerGear’s flying rugby buttocks you really can have both. 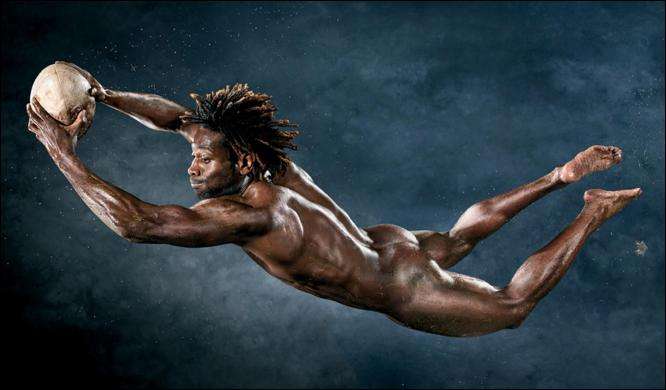 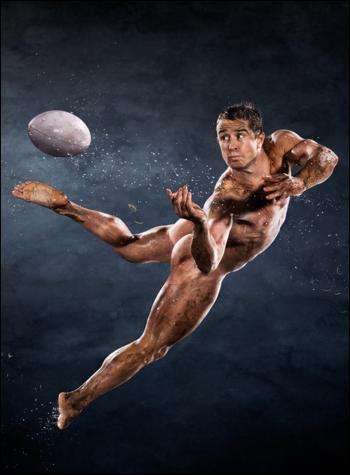