Guardian Gives Shane Warne a Kicking – For His Own Good

You may remember that a few weeks back Metrodaddy was moved to defend the new, svelte Shane Warne from a metrophobic kicking by the British press. Even though his look isn’t really working for me.

It seems I may have to do it again.

The Guardian — ‘the world’s leading liberal voice’ — has finally got around to putting the caring, liberal boot in too, with a piece by Hadley Freeman titled ‘What’s Up With Shane Warne?’ But the Graun being the Graun it can’t just have an honest bit of metro-bashing. Oh no. It has to do it with a side-order of hypocrisy and and a sprinkling of sanctimony:

‘This is not a plaint of the quasi-misogynistic and homophobic ones that have appeared in other, inferior rags, which can be summed up as “Liz ‘That dress’ Hurley turned Shane into a big queen’.

But  of course that’s exactly what it is. And precisely because it’s the lovely liberal Graun which officially adores The Gays it can be more explicit than The Daily Mail:

‘Leaving aside the fact that he appears to have morphed from the chubby, frosted-tip rogue that he was for several decades into Dale Winton’s blond brother, all with the help of nothing other than the Estée Lauder moisturisers his girlfriend Elizabeth Hurley happens to shill for, it’s the man himself that concerns me.’

But it really isn’t the man himself she’s interested in (who tells us ‘he feels better than he has done in years’). Again and again Freeman’s whinge is that Warne isn’t a man anymore because… he’s not the chubby, blokey cricketer with the bad peroxide job whom she freely admits she wasn’t very interested in. And in fact, the virility of the entire Australian continent has been insulted by Hurley and England’s spaying and gaying of its favourite sportsman.

Freeman like most Brits (see any UK ad for Fosters) seems to fetishise Australia as some kind of repository of authentic masculinity – when in fact the bathrooms of Sydney are repositories of more male beauty products than almost anywhere on Earth. I suspect that part of the ladies and gentlemen of the British press’ bitter antipathy towards Warne’s makeover metrosexuality is the way it deprives them of their fantasy of being rogered senseless by a sweaty, leathered up Mel Gibson in Beyond Thunderdome.

Now, I realise that Freeman is employed to be bitchy and isn’t to be taken terribly seriously. And besides, her breathless style is a little difficult to follow. Or read. All the same, and for all the ironic and hypocritical smoke this piece puts out, it’s pretty clear that ‘the world’s leading liberal voice’ has some very traditional views on masculinity, even in its ‘Life and Style’ section, which has past form in this area.

But then The Graun has always had something of a puritanical bent, which is in full sermonising mode in this recent piece in the TV Section about the Welsh rugger bugger and galloping metrosexual Gavin Henson, pegged to his latest reality TV venture The Bachelor, which manages to characterise the show as demeaning to women (possibly a contractual requirement at The Graun) but spends most of its time demeaning Henson for being a rugby player who is also ‘a looker’.

Though at least the author David Stubbs is more honest than Freeman about being an old-fashioned girl.

More on The Bachelor soon….

Thanks to Bat020 for alerting me to ‘Where have all the real men gone?’ by Bryony Gordon in yesterday’s Daily Telegraph which despite the ominous title, comes out in doughty defence of Shane Warne and metrosexuality. Leaving ‘the world’s leading liberal voice’ sounding even more b&t:

‘The survey, by Dixons, found that if allowed to travel with just one electronic device, four times as many men than women would take an iron. In fact, portable speakers for iPods come below hairdryers, straighteners and a male grooming kit in the list of travel products men claim they cannot live without.

“We are increasingly seeing men coming into our stores to pick up last-minute travel essentials, such as a hairdryer and travel iron,” said Daryl Humphries of Dixons. “They often hope their girlfriend won’t notice.”

Newsflash, boys: we have noticed. We know that you sometimes use our Estée Lauder Advanced Night Cream (we can smell it on you), that you occasionally reach for our tweezers, and we have seen you studying your wrinkles in the bathroom mirror. And you know what? It’s really OK.’ 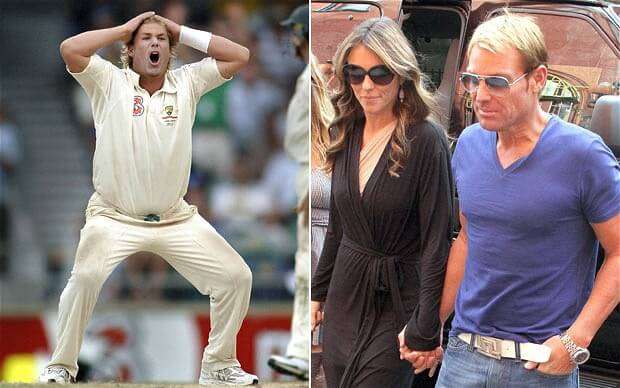 Remember the Australian cricketer Shane Warne? Remember how blokey and beery and one of the carefree lads he was? A proper man’s man? Well, he’s only gone and been snared by a posh Pommy Sheila who’s turned him into a bloody pooftah!

Or at least this was the drift of today’s Telegraph article about him, snappily titled: ‘Shane Warne’s remarkable transformation at the hands of girlfriend Liz Hurley continues’:

During his years as a famous Aussie cricketer, Warne had declined to take much of an interest in his physique or appearance, except for the odd foray into blond hair dye and hair “renewal”. If he grew slightly overweight thanks to too much beer and too many meat pies, it didn’t seem to worry him.

But it seems those days are over.

Since he met and started dating Hurley, he has morphed into an altogether more sophisticated creature.

Gone is the bad dye job and spiky hair. Gone is the pot belly. Gone are the trainers and high-street tracksuits.

These days Warne seems to be styling himself, or being styled, on a cross between James Bond and a Ken doll.

Thanks to the attentions of Hurley he says that he has lost 22lb and feels better than he has in years. He appears to have had his eyebrows reshaped and has even admitted to using moisturising cream, defiantly proclaiming: “Yes, I’m still a man”.

Warne, nosing into middle-age at 41, is a latecomer to the metrosexual party, but he appears to be making up for lost time. For what it’s worth, I’m not sure his look is exactly working for me, but it seems to be working for him and that’s rather more important. After all, he ‘feels better than he has in years’.

But note how this is all ‘at the hands of’ Hurley. How he is ‘being styled on a cross between James Bond and a Ken Doll.’ Hurley in other words is playing dressy-uppy with her new boy toy. Who might proclaim he’s ‘still a man’, but we know he’s been tamed, and spayed and turned all girly by Hurley.

We’ve been here before. A similar sort of thing was said about David Beckham when he married Posh Spice (and not just by Sir Alex Ferguson). The wicked witch had ensnared the fresh-faced Manchester United footballer and then, with the help of her gay chums, had drugged him with hairspray and turned him into the sarong-wearing sissy that paraded in front of the world’s media.

A decade on, I think now most people accept that Becks is the way he is because Becks wants to be the way he is. He chose Posh as much as she chose him — probably because he wanted to be the biggest Spice Girl in the world. If so, he succeeded.

Warne isn’t going to challenge Becks for his metro crown any time soon, but he has obviously decided to prettify himself considerably. So much so that to some retrosexual die-hards it must almost look like a sex change (‘Yes, I’m still a man.’).

But Warne seems to enjoy feeling pretty. Maybe Hurley appealed to him precisely because she knew all the right stylists. So he could become the beautiful metrosexual butterfly the roly-poly cricketer was trying to turn into all along.

Being a blokey bloke isn’t necessarily about being carefree. It can be about caring much too much what other blokey blokes might say. Perhaps this new glamorous, svelte Shane Warne is the ‘real’ one, rather than an inauthentic, Girly-Hurley-confected fake that The Telegraph et al suggest he is.

In the end, contrary to the way the media often likes to present it, metrosexuality isn’t so much about men submissively pleasing women as men pleasing themselves.

Which, it seems, is the scary part.