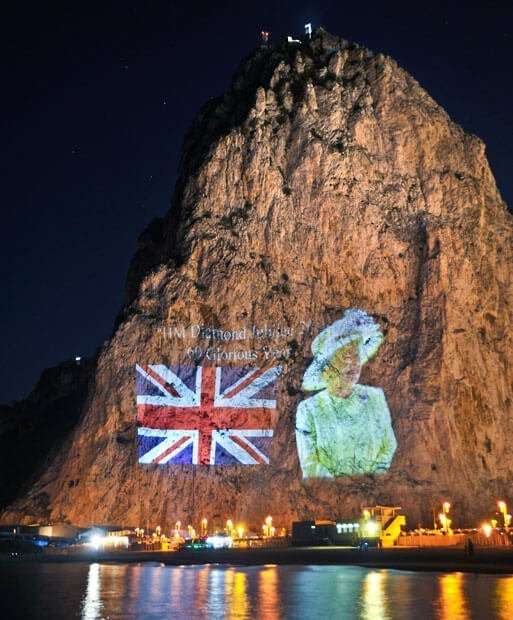 Gibraltar, otherwise known as ‘The Rock’, is the full stop to the sentence of Europe. It has been besieged no less than fourteen times. The Ancients thought it was a pillar holding up the end of the World. In the Middle Ages Jews fled here from the red-hot instruments of the Spanish Inquisition. Aeons ago, the last survivors of the ancestors of Homo sapiens also retreated to this toothy promontory of the Iberian peninsula, lasting a few, increasingly lonely, thousand years more in the dark caves that abound here, before being finally snuffed out by Progress.

Even today, rare and exotic creatures survive here that have long since become extinct elsewhere in Continental Europe. Off one of the narrow, steep, cobbled streets, down some worn steps, there’s a dark cellar bar, that holds out against not only the Twenty First Century but much of the latter half of the Twentieth. This is the domain and refuge of the last of the Sea Queens, Lovely Charlie, landlocked in the last corner of the British Empire.

The brick walls and vaulted ceiling of Charles’ domain are completely covered in battered Royal Navy Ensign flags. All of them have personal messages scrawled across them in Secondary Modern hands: ‘To Lovely Charlie, from the lads on HMS Sheffield -- We think you’re magic!’ (dated 1981, the year before it was sunk by an Argentine Exocet in The Falklands); ‘Donkey Nob Was Here – 1979’’; and ‘Royal Marine Commandos do it in boats – 1989’. Signed photos of sunburnt, laughing young men with cans of lager in their hands and their arms around each other’s shoulders cover the wall next to the bar, together with postcards from Hong Kong, Belize, Brunei, Germany and Kuwait.

Tonight however Charles’ Hole in t’Wall bar -- the finest bar on the Seven Seas -- is completely empty, except for Charles himself, a well-preserved, handsome middle-aged man with glittery ear-studs and immaculate hair, sitting at the bar, and his snoozing big black labrador, heavy eyelids sagging. ‘Well, come in, luv,’ he says, happy to see a face. ‘Sorry it’s so quiet tonight. The Fleet’s out. Mind, it always fookin’ is these days! Are you a matelot? ‘No? What’s that you say? You’re looking for one? Aren’t we all, luv!’ he laughs, and gets me a bottled beer.

‘It was best when the frontier with Spain was closed,’ he reminisces, in his effortlessly camp but strangely butch Gibraltarian English, comically spiked with some coarse, regional Brit expressions he’s obviously picked up from his clientele. ‘When Franco shut the border in 1967 that was the beginning of twenty years of bloody bliss, y’know. When hundreds of sailors have been out at sea for weeks and they dock here, they’re not going to let the fact that there aren’t enough single women on Gib to make a football team stop them having a fookin’ good time, luv!’

‘And they didn’t mind their mates finding out; they’d just say, “I bet you had a fookin’ good time with Charlie gobblin’ yer last night!” and everybody would laugh. Of course, who gobbled whom wasn’t always the way they painted it – but that was something private between me and them. Things aren’t the same now. I still get offers – but they’re much more furtive; they’re afraid that everyone will think they’re gay just because they had a bit of fun with Charles. And then in 1987 they only went and opened the fookin’ frontier, didn’t they? Now most of the lads head off for the bright lights of Marbella. I can’t compete with dolly-birds and disco, can I luv?’

‘But it isn’t about sex,’ explains Charles, sipping a mineral water (he’s teetotal). ‘It’s the company. The camaraderie. It’s my duty to run this bar! I’m a legend in the Royal Navy, y’know. I’ve been to Portsmouth and Plymouth. They treated me like a real Queen. There was nothing they wouldn’t do for me. I was really moved. I was in Edinburgh once, and a lad came up to me and said, “It’s Lovely Charlie, isn’t it!’ He was very sweet. He whispered, “Look, Charles, you can’t wear that much jewellery around here. They won’t understand”.’

‘I’m passed down, father to son. I had an eighteen-year-old sailor come in here last month, his first time. He said: “That door’s new,” pointing to that door over there to the pool-room which I had installed about ten year ago. “How did you know that?” I asked. “Oh,” he said, ‘my dad’s got a picture of him sitting on your knee. It was the year before he met me mam.”

‘They like to tell the newbies that they’re going to sell them to me for a round of drinks, y’know. Of course, that doesn’t happen. I’d never take advantage. But they like to wind up the youngsters. One lad came here with his Dad – the Navy has a Father’s week where they fly fathers who were in the Navy out here to travel home on board ship with their sons. He said: “Well, ‘ere you go Charles, you can ‘ave your wicked way wiv ‘im if you keep the drinks comin’!” I laughed and said, “Well, you’re his dad, so I suppose that makes it legal!” You should have seen the poor boy’s face!’

‘Oh yes, occasionally you get trouble-makers. They come here saying how much they “’ate fookin’ queers”. Everyone goes quiet because they know he’s going to get a tongue lashing from me. I usually say something like, “And I ‘ate fookin’ ugly cunts like you, luv!” Everyone usually pisses themselves laughing. And usually,’ adds Charles, winking, ‘they end up staying the night…’.

‘I can’t go on forever, though y’know. I’m not as young as I used to be. But the matelots, bless ‘em, they don’t notice any of this decay! They always say, “Oh, Charlie, you never change!” and I say to them, “Well, no, but the wattage does!” Charles laughs. ‘Every year a bit less. I started off here with 100W bulbs. Now I’m down to 10W. And tinted!’

‘What’s that? Why do the lads love me so? Oh it’s because they know I love them,’ he explains with a shrug. ‘And I’m always here. Unlike barmaids, I don’t regard them as a problem or as a meal-ticket. And, of course,’ he smiles, winking, ‘they do like my outrageous behaviour. They always insist that I wear all my jewellery when they come to visit.’

A few hours and a crate of beer later I’m staggering back to my hotel and can’t help thinking that the reason the sailors treat Charles like a star is simply because they recognise one when they see one. ‘Lovely Charlie’ is, well, lovely. And priceless. When he finally calls last orders, or runs out of wattage, a little but precious piece of British maritime and marytime history will be lost forever.

This piece was originally published back in 2000 (and collected here), but I’m very happy to report that Charles is still going full steam ahead, and so is a recently-refurbished Charles’ Hole-in-the-Wall bar -- he’s even upped the wattage! (Castle Street, Gibraltar; opens at 9pm.)

After forty years quenching the thirst of the Royal Navy, Charles’ world famous Hole in T’Wall Bar is closing. But Charles’ matelot fans are giving it a jolly Jack tar send-off -- and showing Charles how much they luv ‘im. GBC ran a feature on the closure, which includes footage from the bar -- and a rather wonderful big framed photo of what looks a lot like Charles in drag (that I somehow seemed to miss during my visit):