Not entirely sure how useful their fitness advice is -- nor how you ‘pre-activate’ your glutes, without using lube.

But full marks to the Kilted Coaches for doing their kilted/un-kilted vids in Scottish sleet. Next to what looks like a busy A-road.

How To Get Great Glutes with these 3 Simple Exercises 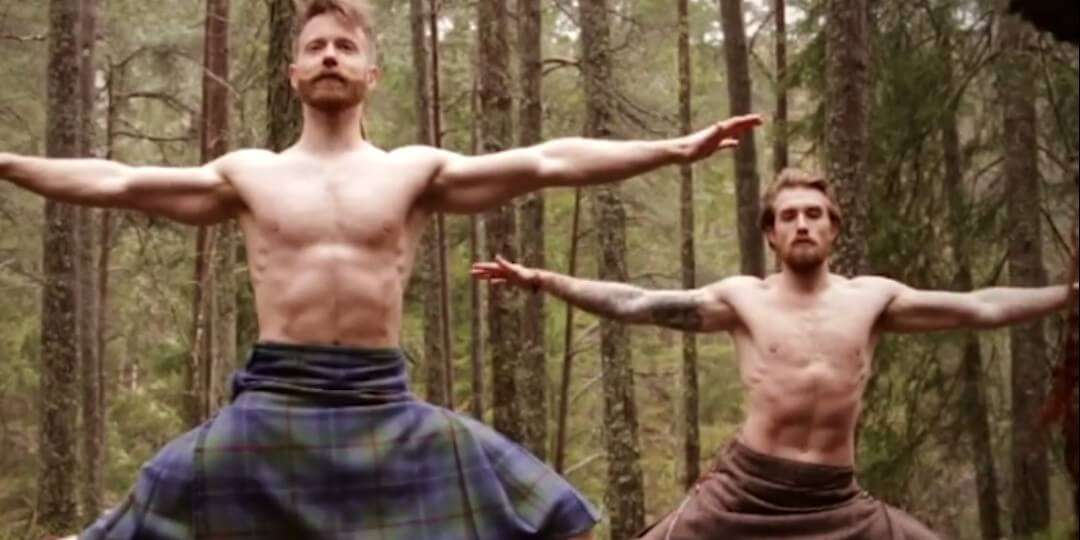 Because I’m such a dedicated fan of yoga (in kilts) I’m overlooking the beards and posting this very uplifting BBC Scotland video of Finlay, a yoga teacher from Dundee, and his pupil Justin, practising their inspirational moves in the bracing Caledonian countryside.

And while we’re all inspired, I thought I would also post this spornographic video ‘The Homoerotic Side of Wrestling’ below.

To be fair to the wrestlers, the homoerotics is mostly in the naughty editing here. And also the design of wrestling singlets: apparently, unlike kilts,  it’s extremely tricky to get comfy in one. Even if some of the wrestling moves at the beginning look extremely snug to me.

Thank goodness the decision to drop wrestling from the 2020 Olympics was reversed.

It’s over. ‘Britain’ and ‘Britishness’ are politically moribund terms. The proof? Scottish-flavoured New Labour’s recent laughable attempts to resurrect “Britishness” as an “inclusive” post-Imperial identity. Not so much because they flopped as the fact that Britannia was now such an empty vessel that she could be so casually appropriated by New Labour in the first place.

Whatever the outcome of next month’s elections to the Scottish Parliament – and at the moment the Scots Nationalists are ahead – unionism as a political force and national identity is finished. Anxious New Labour strategists aside, there’s no real appetite for it either side of Hadrian’s Wall. Meanwhile, across the Irish Sea even ‘British Forever!’ Loyalists like Ian Paisley are now in government with Sinn Fein Irish nationalists.

New Labour’s attempt to buy off Scottish nationalism with parliaments, unequal voting rights, free prescriptions and universities, shiny new bridges, has failed. Worse, it’s only served to ignite the political frustration of those ‘British’ people paying for much of this – people who, despite the best efforts of the political and media classes, increasingly see themselves as English.

Amidst all the chatter in London about whether the Scots will embrace the Scots Nationalists or not in May and whether it will be a good or bad thing for Scotland, hardly anyone is asking what the English want, or even acknowledging their existence.

There’s a good reason for this. Whatever they brought the English in the past, the institutions of ‘Britishness’ are now largely a conspiracy against England and the English. A way to keep them disenfranchised and identity-less – except during international football matches (and then only because the Scots refused, years ago, to join a UK team). Those ‘chavvy’ plastic St George’s flags fluttering from black cabs and housing estates mocked by the middle classes are all the English are allowed. The Welsh can be Welsh. The Scots can be Scottish. But the English have to be British.

The BBC, Westminster, the Monarchy and above all London all block the emergence of an English national – and political – consciousness. Why? Because it would undermine their power, their status and indeed their point. The institutions of ‘Britishness’ may or may not favour ‘Scottishness’ (and ‘Welshness’) but they are quite definitely all set against Englishness. London is the former capital of a global empire turned capital of globalisation still pretending to speak on behalf of a ‘Britain’ that doesn’t exist any more – but located in the heart of an England that actually does.

Such impotent discussions about whether the English should also be allowed a parliament of their own that are occasionally indulged seem somehow to always overlook the rather salient point that there would have to be a revolution before the English got a parliament of their own. Even if Scotland, Wales, Northern Ireland and the blinking Isle of Man all seceeded, London would probably still try to claim to represent ‘Britain’ rather than recognise English sovereignty – or the English.

For England to assert herself power and status would have to be wrested out of the hands of ‘British’ institutions that reside in the English capital.  Institutions that claim to represent a country that no longer exists save in the speeches of apparatchik, globalising Scottish chancellors keen to smooth the way for their London coronation.