Leicester Forest East, situated – or rather, squeezed – between J21 and J21a on the M1, contains a slightly interesting paradox to those sufficiently undulled by the boredom of motorway driving and an entire family pack of Haribos to notice it.

Not its appearance, which now looks like a very average 1960s motorway services that has seen better days, but because it is in actual geographical fact west of Leicester and there is no Leicester Forest. On investigation however, it turns out not to be a Harry Potter-esque Platform 9 ¾ situation. The name is down to the slightly disappointing discovery that the services are located east of somewhere called Leicester Forest West.

And that, you might think, is all there is Leicester Forest East. Along with the usual bland modern quick fix carbs/fats/caffeine outlets, including a Burger King, KFC, Baskin Robbins, Dunkin’ Donuts, Krispy Kreme, Harry Ramsden and a Starbucks.

But you’d be wrong. Very wrong. LFE has a past. And what a past! When it opened fifty years ago on February 15, 1966, LFE was the most glamorous place to eat on the motorway – and very possibly the whole of Leicestershire. 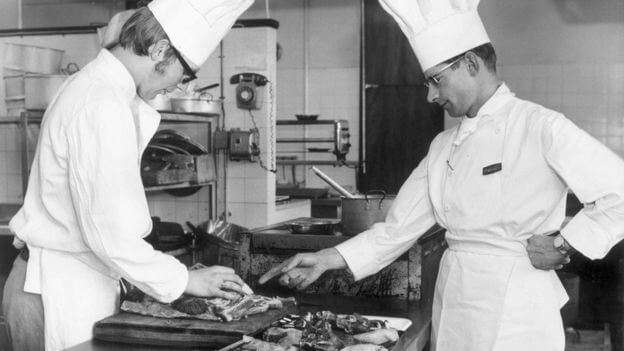 “Shall I point at something else now? Or do you have enough pointing shots?”

It boasted a 692 seat Terence Conran-designed silver-service restaurant occupying the bridge above the carriageway, called ‘The Captain’s Table’, fitted out with luxury carpets, ocean liner décor and a deck-like balcony. There were even waiters in sailor suits and a pianist on a baby Grand. And no, I’m not making this up.

Today, motorway gourmands stopping here have to make do with a pricey panini from Waitrose.

Although it now looks like a fairly non-descript unloved 1960s giant concrete bus-stop, LFE was an architectural novelty in the UK when it was built. Based on an Italian design used on the Autostrade, and placing terraces at each end of the two-storey bridge-come-amenity building, it was rather ‘Mod’.

Frozen food retailer Ross had won the Ministry of Transport tender with their audacious design and a promise to bring fine dining to M1 motorists. They had decided that motorway services represented an exciting new business opportunity as well as a good way to publicise themselves – hence the fishy-themed restaurant, and their efforts to make the food as good as possible. By all accounts, they succeeded.

In a nice touch, the first private motorist customer, Andrew Thorp of Church Road, Leicester, and the first lorry driver, Derek Lashbrook, of Greenwich, London received a voucher entitling them to a free meal there every 15 Feb until 1991.

But the worth of those vouchers expired much quicker than anyone anticipated – the golden days and the good intentions didn’t last very long. With more and more motorway services opening in the late 60s, the ‘glamour’ and novelty of eating on the motorway rapidly declined into a chore – while competition rapidly increased. And the competition was on price, not quality. Inevitably, the Captain’s Table hit the iceberg of economic realities and began to go under. It soon found itself sharing the commanding bridge at LFE with other service amenities, while the distinctive terrace was closed for ‘health and safety’ reasons.

In the 1970s, Ross reluctantly gave up on glamour altogether and introduced a betting shop, ice cream stall and a separate Happy Eater restaurant. Eventually Ross threw in the motorway services towel and sold LFE to the current operator, Welcome Break in 1985 – who are of course a byword for culinary delight….

While it’s almost certainly a more convenient and much quicker pit-stop with more choice in its modern ‘food court’ than back in 1966, it’s apparent that the glamour of LFE – rated 3/5 burgers by this motorway services review site – has long since fled. As it has of course from all other motorway services.

But sometimes it is still occasionally glimpsed, usually in the newsagents, buying crisps and a fizzy drink. In a recent BBC report on LFE’s 50th birthday, Suzanne Chapman, who works in the newsagents, recalled the celebrities she’s served: ‘Terry Waite, Steve Davies, they’ve all been through’. Some were shyer than others: ‘David Frost came, but he didn’t come to the till, he sent his driver and stood in the background.’

Perhaps Frost, who of course became a celebrity in the same decade as Leicester Forest East, was busy reminiscing about the Captain’s Table and the waiters in sailor’s outfits.