Forget hair whorls, genomes, amniotic fluid, older brothers, domineering mothers or disco. I can reveal with absolute, religio-scientific certainty that the cause of my homosexuality was just two words.

As a kid in the 1970s I watched reruns of his movies, especially the ones from the early fifties with his on-screen boyfriend Dean Martin, with a level of breathless excitement that nothing came close to – until I discovered actual buggery in the 1980s.

Films like Money From Home where he pins Martin to the bed wearing a pair of polka dot shorts camper than Christmas in West Hollywood (1953), and Sailor Beware (1951), where he is pricked by several burly USN medics wielding ever-bigger needles until he squirts liquid in all directions and faints made me the man I am today.

Earlier this year, after a lifetime of being ignored by a cross-armed Academy Awards that never gave him so much as a nomination when he was making movies, Lewis is finally getting an Oscar.

But not for his hilariously cute films with Dean Martin or his solo classics such as The Bellboy, The Errand Boy, The Nutty Professor, and The Disorderly Orderly – in which, memorably, he happily hoovers with the appliance plugged in up his own ass – but for his fundraising for Muscular Dystrophy.

It’s a charity Oscar – in every sense. Lewis is 82 and has had serious health problems for some time.

The Hollywood gays though were reportedly Not Happy. They had a hoover up their ass about Lewis.  Apparently some tried to block his Oscar because this ill, old man born in 1926 almost used the word ‘faggot’ last year after hosting a twelve hour telethon.

In effect, The Gays are running down the street screaming Maaaaaaa!!

Likewise, because he isn’t himself gay, and because his early nerdy, ‘retarded’ sissy persona has been deemed ‘exploitative’, Lewis has been almost completely spurned by gay studies, when really he should have his own department. If nothing else, Lewis Studies would be a damn sight more fun than Queer Studies. (As long as they didn’t include the Telethons).

His films should be set texts, but it was his anarchic early 1950s TV shows with Martin when a twenty-something Lewis was at his queerest and giddiest. Their heads so close together in those tiny 50s cathode ray tubes, gazing into each other’s eyes, rubbing noses, occasionally stealing kisses or licking each other’s necks to shrieks of scandalized pleasure from the audience. They were a prime-time study in same-sex love. And were adored for it – literally chased down the street by crowds of screaming young women and not a few men (especially popular with sailors and soldiers, they were the Forces’ sweethearts).

This half-century old double act from the homo-hating 50s is much more alive, much more flirtatious, than today’s supposedly liberal and liberated ‘bromantic’ comedy, which goes  out of its way to purge the possibility of anything physical. Next to Dean and Jerry’s simmering screen-love, bromance just looks like bromide.

Whatever the nature of his off-screen sexuality, Lewis’ comedy partnership with Martin – the most successful of all time, along with most of their best gags – was based around the matter-of-fact, unspoken assumption that they were a couple.

Their very first TV show opens with our boys arriving at a posh ball full of Waspy straight couples being announced: ‘Mr & Mrs Charles Cordney!’, ‘Mr and Mrs Walter Christiandom!’.  And then: ‘Mr Martin and Mr Lewis!’.  The dago and the jew. Setting the tone for their series, Lewis promptly trashes the place with his nervy-nerdy slapstick.

The Martin and Lewis partnership was queer punk rock before even rock and roll had been invented, trashing normality right in the living rooms of 1950s America, courtesy of Colgate. No wonder they’ve been almost forgotten.

They should never have existed.  True, the explicitness of their pairing depended on the official ‘innocence’ of the times, and the nostalgia for buddydom in post-war America, allowing the audience to enjoy the outrageous queerness of what was going on without having to think too much about it. Literally laughing it off.

But official innocence is a mischievous comedian’s gift-horse. A skit depicting (fictionally) how Martin and Lewis – or ‘Ethel’ and ‘Shirley’ as they called one another – met, climaxes with them being trapped in the closet together: pushed together mouth to mouth, crotch to crotch, by Martin’s vast, vain collection of padded jackets.

In another skit our boys end up sharing a bed with Burt Lancaster playing an escaped homicidal maniac: Jerry: ‘Boy, Dean, these one night stands are moider!’

Moider was exactly what they got away with.  In a skit set in prison, Jerry’s bunk collapses on Martin below. ‘What are you doing?’ asks Martin. ‘I felt loinesome,’ replies Lewis.

Lewis’ on-screen queerness may have been just a phase – but what a phase! It was so unruly, so indefinable, so crazy, so ticklish, so exhilarating that gays – and probably most people today – don’t know what to do with it. Or where to put it.  It’s a bit scary, frankly.

But that – in addition to still being piss your pants funny – is precisely what is so great about it. And why I still think classic Lewis is as much fun as sodomy. 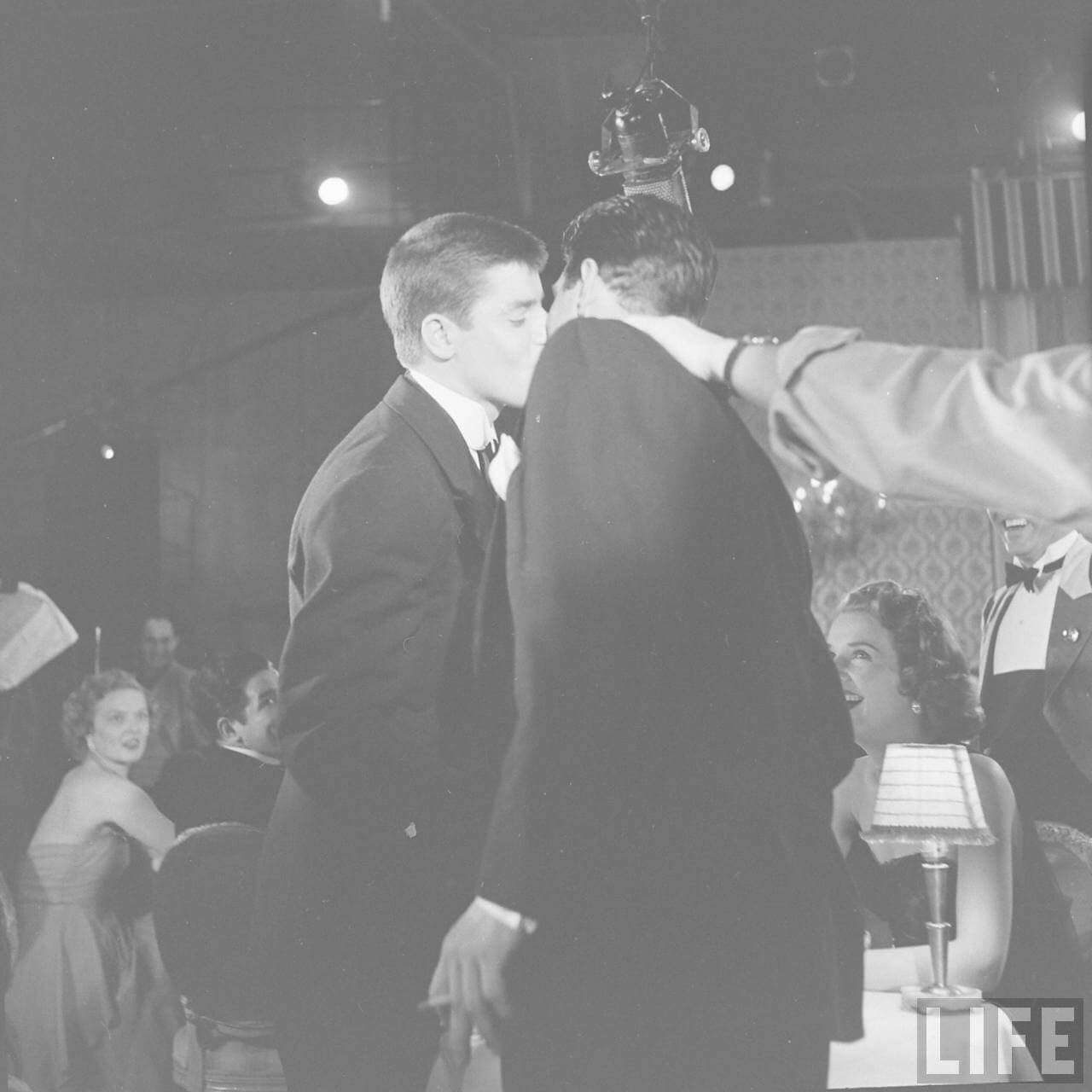 An ‘exploision’ of D&J kisses in this cheeky and charming clip painstakingly compiled by a YouTube fan.

The noise made by the audience when Dean falls on top of Jerry in the bath wouldn’t be heard again until Elvis shook his pelvis.

Jerry joins the Navy, gets some big pricks, and then sprays everywhere.

Dean and Jerry join the Army as paratroopers. Watch Dean’s eyes during the blanket scene.

A slightly fictionlised account of how our boys met, complete with closet clinch climax.

Special thanks to Elise Moore and Hannah for sharing their pashernate love of Dean & Jerry — and reminding me of mine. This month’s Outfeatures a column by yours truly, called ‘In Defense of Jerry Lewis‘, explaining how my childhood love for early Lewis made me the man I am today — and why his anarchic comedy partnership with Dean Martin in the ‘repressed’ 1950s was a kind of queer punk rock before even rock and roll had been invented:

‘Their heads were so close together in those tiny ’50s cathode-ray tubes — gazing into each other’s eyes, rubbing noses, occasionally stealing kisses or licking each other’s neck to shrieks of scandalized pleasure from the audience. They were a prime-time study in same-sex love. And they were adored for it — literally chased down the street by crowds of screaming women and not a few men…’.      (‘In Defense of Jerry Lewis’)

Though these clips below probably explain it all rather better.

They also show how compared to Martin and Lewis, today’s much vaunted ‘bromance’ comedies are more akin to bromide. Lesbian bed death without the honeymoon. Instead of going out of their way to purge their stage romance of any hint of passion or anything physical in the way that annoyingly self-conscious, college-educated 21st Century buddy comedies do (the word ‘bromance’ itself suggests that any hint of erotics would be akin to incest), Martin and Lewis’ blue-collar, mid-century love-affair constantly injects it. Flags it up. And slaps your face with it. Theirs is literally a much more ticklish affair. And a shitload funnier for it.

(Oh, and yes, it may be that I still feel fond of Jerry Lewis because his telethons never made it to the UK….)

An exploision of D&J kisses in this cheeky and charming clip painstaking compiled by a YouTube fan.

The noise made by the audience when Dean falls on top of Jerry in the bath wouldn’t be heard again until Elvis shook his pelvis.

Jerry gets some big pricks in the Navy and then sprays everywhere.

Dean and Jerry join the Army as paratroopers. Watch Dean’s eyes during the blanket scene.

Spot a (very tiny-looking) James Dean giving a boxer a rub-down while scoping the competition.

A slightly fictionlised account of how our boys met, complete with closet clinch climax.

Special thanks to the Canadian playwright Elise Moore and Hannah for re-kindling my unhealthy Lewisian love-affair, offering insightful observation – and sending me some really great YouTube Martin & Lewis love.