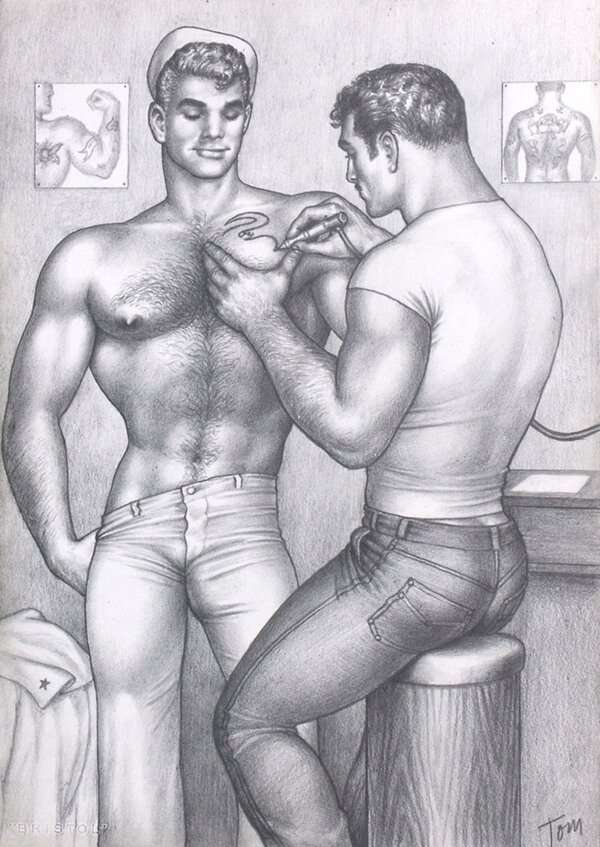 The teenage Tom of Finland’s gay fantasies from the 1940s of muscular men have come to define a mainstream view of masculinity, argues Mark Simpson

(The London Times, Nov 2008 and collected in Metrosexy)

The first time I saw a Tom of Finland drawing was in a well-thumbed, seventh-hand issue of Fiesta, a top-shelf favourite of schoolboys in the 1970s. The image, buried at the back, was in a small ad for more “specialised” publications, probably missed by most of my schoolchums who had thumbed the issue before me. But it jumped out at me like an outsized erection.

It depicted a pair of muscular butch young men with big chins and broad grins grabbing each other’s bubble butts and straining packets while winking at the reader. I immediately rushed out to the post office to buy as many postal orders as my pocket money would allow.

Although I was sorely disappointed with the ‘Biker Boy’ lame leather fetish magazine – with no Tom of Finland drawings – that eventually turned up, I have spent much of my adult life and a fortune on gym membership fairly ‘fruitlessly’ trying to recreate that Tom of Finland image that I glimpsed as a teen.

I needn’t have bothered, however – because as it turned out the whole world was going to become a Tom of Finland drawing. His sensualised, cartoonish über-male body and its endless potential for pleasure and pleasuring has become commonplace. Think of the rugby player Austin Healey pulsating on BBC One’s Strictly Come Dancing in tight pants and a sleeveless top. Or all those footballers keen to strip off and show us their assets on the sides of buses.

The notes for artist retrospectives usually make extravagant claims, and those for a major retrospective of Tom of Finland in Liverpool, part of that city’s annual Homotopia queer culture festival, make some very extravagant ones indeed: “Tom had an effect on global culture unmatched by that of virtually any other artist,” we are told. But for once, there’s something to this hyperbole, despite the artistic merit of his work being very debatable.

Tom was born Touko Laaksonen in Kaarina, Finland, in 1920 and his work is literally the masturbatory fantasies of a lonely young homosexual Finnish boy – he began drawing in his locked bedroom in the 1940s, pencil in one hand, penis in the other. His fetishised, overobserved, long-distance gay appropriation of masculinity has, in a mediated, long-distance world, become… masculinity.

It’s often said that Tom’s greatest achievement was in drawing gay men who were masculine, happy and proud at a time when they were supposed to be effeminate, neurotic and shameful. This is certainly the reason why so many gay men are Tom devotees, wittingly or not. Today’s gay porn is merely filthy footnotes to Tom, endlessly replaying the narrative of “regular guys” with very irregular-sized penises and pectorals having spontaneous, shameless sex at the drop of a monkey wrench.  (And it’s entirely apt that one of the sponsors of this retrospective is Gaydar, the gay ‘dating’ site where gay men post Tom-ish pictures of themselves looking for other Tom-ish men to have Tom-ish sex with.)

However, the out-and-proud gay biker look – identity even – that Tom perfected after seeing Marlon Brando in The Wild One (Brando was a Tom drawing in 3D) and which became so popular in the pre-Aids 1970s and early 1980s, reaching its peak with the climactic success of the Liverpool band Frankie Goes to Hollywood, has become a dated cliché. See, for example, the tangoing, mustachioed leather men in the Blue Oyster basement bar in Police Academy – and few if any young gay men today aspire to it.

But when you look at Tom’s drawings in this retrospective, which features 25 of his works in the basement (predictably) of the Contemporary Urban Centre in Liverpool, it becomes apparent that his achievement goes much further than just making gay men feel good about themselves or love the snugness of leather harnesses. Tom, who worked as an illustrator in the Finnish advertising business until the early 1970s, when he became a full-time gay propagandist, sold the male body as a pleased, pleasuring and pleasured thing several decades before Calvin Klein thought of it. In the middle of the 20th century, Tom was effectively sketching the blueprint of 21st-century man. And boy, was he blue.

Before Tom almost no one drew men like he did, making them such unabashed sex objects and sex subjects, giving them such exaggerated male secondary – and primary! – sexual characteristics: big chins, strong jaws, full lips. Masculinity, and virility end up looking so… nurturing. Buxom. Busty. Tom’s men have round firm breasts, saucer-like aureolas and nipples you can adjust your thermostat with. One (from 1962) struts down the street, biceps bulging, chest literally bursting out of his shirt, and dressing very much to the left: no wonder he’s being followed. 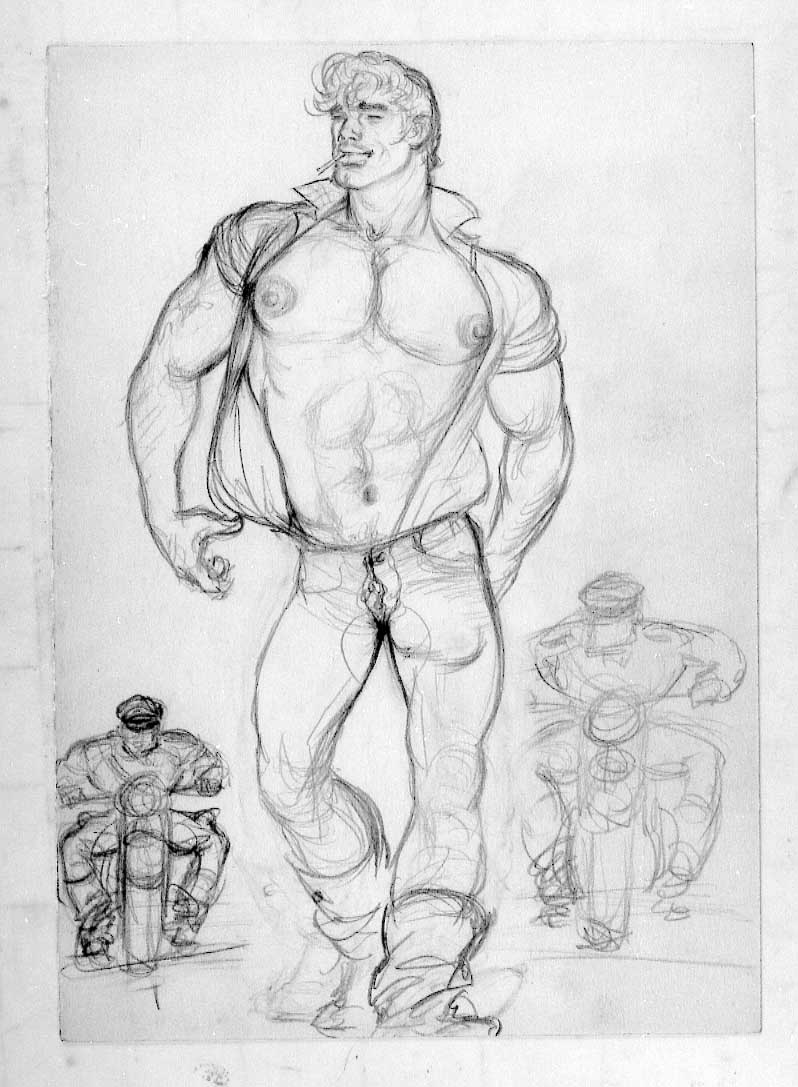 His saucy curvaceousness a testament to the way in which aestheticised hyper-masculinity is oddly androgyne. And while Tom’s men may have had their tits out for the lads, the kind of Tom-ish male body he helped to invent is nowadays getting them out for lads and lasses, gay or straight, online or in real time.

Likewise Tom’s drawings also reveal the male derrière as a sexual organ: not just in some of the more hardcore examples, but the way that Tom-ish buttocks are so spherical, so sensual, so inviting. One of the most striking and prescient sketches, from 1981, is also one of the tamest: a row of bedenimed male bubble butts sticking out at a bar – awaiting perhaps the attentions of the hugely powerful Abercrombie & Fitch photographer Bruce Weber (a big Tom fan), or perhaps the vaselined, wide-angled lens of a Levi’s commercial. 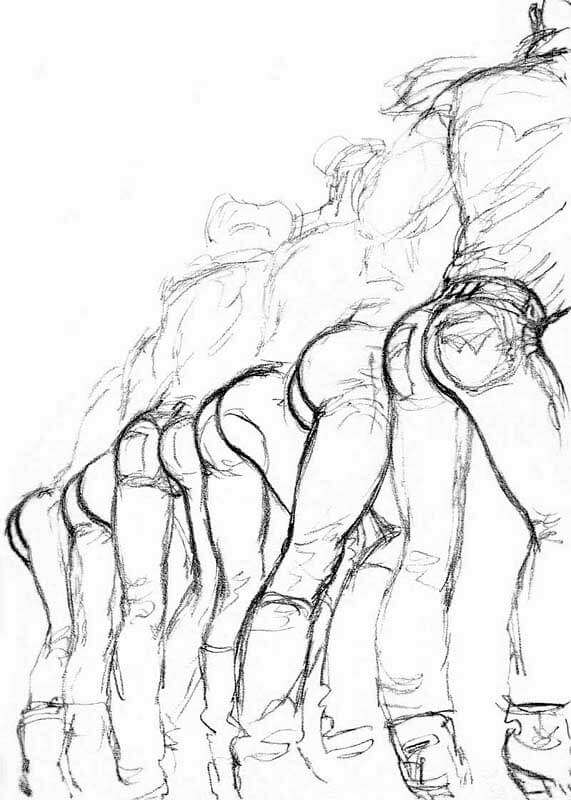 Tom’s big break came in the 1950s from Physique Pictorial, an underground, semi-legal gay American fanzine disguised as a straight men’s bodybuilding magazine, which frequently put Tom’s men on the cover. Half a century later, and 17 years after his death in 1991, the world is inverted: flesh-and-blood men who look like Tom’s drawings appear on the cover of bestselling corporate mags such as Men’s Health. Flick one open, and you’ll find it full of advice on how straight men can turn themselves into something Tom-ish.

Compare the 1960s Tom of Finland sketch of the pneumatic young man swaggering/sashaying down the street at the top of this essay, with the one below of 21st Century Jersey Shore star Mikey ‘The Situation’ Sorrentino. 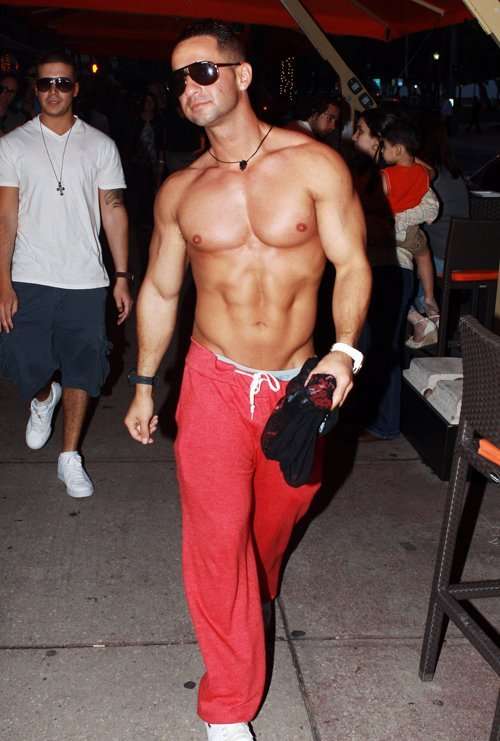