Went to see male strip troupe Forbidden Nights at a theatre in North East England this week – I’m a sucker for a bit of culture, me.

And who could resist an evening billed as a ‘spectacle of desires, passion and excitement’ filled with ‘acrobats, fire acts, aerial artists and world-renowned circus performers’?

Especially when they ‘have not only mastered the art of strip tease, but do it in a way that has never been done before’.

A new way to flash your tackle? No wonder the auditorium, which seats 1000, was packed out.

Though me and my fit (non-bum) chum were the only men.

The women behind us, who like most of the audience were well lubricated long before the Baby Oil was cracked open, were loudly discussing my chum.

The show alas didn’t deliver the goods. Despite the ladies of Darlo roaring like Armageddon: ‘GET YER COCKS OUT!!’

The ‘acrobatics’ consisted of a few backflips, the ‘fire act’ was a damp squib. The ‘aerial artist’ was more impressive, but sadly not very fuckable.

Forbidden Nights fell between two stools – a ‘circus strip act’ that is neither really a circus act nor a strip act. The promised striptease ‘in a way that has never been done before’ turned out to be one that is all tease and no strip.

Of course, I’m biased, but this seemed to me to be a terrible waste of talent. I suspect that if the guys interacted more, even just in that tried-and-tested slightly flirtatious boyband fashion, the women would love it.

Then again, why am I giving away this kind of advice for free instead of just putting together my own strip troupe and cleaning up? Or at least just holding LOTS of auditions….

There was almost a riot after the bathetically anti-climactic ‘shower scene’ finale – no dick and barely a glimpse of bum cheek. Just lots of shimmying in silhouette behind a paper blind.

One woman was shouting in the foyer: ‘I’VE SEEN MORE COCK IN ASDA ON A WET SUNDAY!’

Nor, frankly, were the bodies in the poster attached to the faces that were.

Obviously, someone tipped him off as to just how demanding 998 North Eastern women determined to have a good time can be.

Getting Naked For Signore Spacey

Can’t say that Kevin Spacey  has quite the same effect on me as he appears to have on this Italian act called Gabriele. But I’m very glad he did.

The Hollywood actor was a guest recently on Italian talent show Amici di Maria De Filippi. And what talent they have in Italia! That very shy lad in white, who keeps licking his fingers and playing with his own endowments, is a veritable masterpiece.

(As ever when watching footage of armies of naked young men offering us their perfect pecs, packets and buttocks on prime-time it’s important to remember that male objectification doesn’t exist and in fact is impossible.)

For some reason, the Italian TV clip minded me of this ageless moment from a few years back where another group of shirtless young men entertained another famous older man in Rome:

I’m really looking forwards to this doc La Bare, about a male stripper club in Dallas, released later this month. This single clip is more sensual than anything in Magic Mike. Except the bit where he goes to take a piss after a hard night’s partying. And that’s just accidental buttock roll.

I have no idea how to body roll, and I suspect it would be medically inadvisable at my age – let alone aesthetically – but it certainly looks quite something when muscular men do it, as opposed to the teen girls on My Big Fat Gypsy Wedding.

“Honey, you don’t wanna know what I have to do for twenties.”

I like the fact he hasn’t got a fashion beard. I like his open, boringly beautiful boyish face. I like his GI Joe body. I like the kind of slightly goofy characters he plays. I like that he worked in a strip joint before he started stripping off for Hollywood. I like the way he works the vibe that he’s a no-nonsense blue-collar Southern boy who could have ended up on a gay-for-pay website – and wouldn’t be embarrassed if he had.

I like the way his name is as American and daft and reversible (versatile?) as, say, Todd Hunter. I like the fact that he doesn’t take himself too seriously. He’s like a prettier Marky Mark, sans the hang-ups and machismo and avec a sense of humour instead.

But most of all I like Tatum Channing because he knowingly embodies both the joke and the seriously good news about men’s objectification. The butt of the gag and… the butt. Tatum gives male tartiness a good name.

And I can’t wait for the male stripper comedy Magic Mike. Which is shimmying up to be the must-see metrosexy movie of the summer. 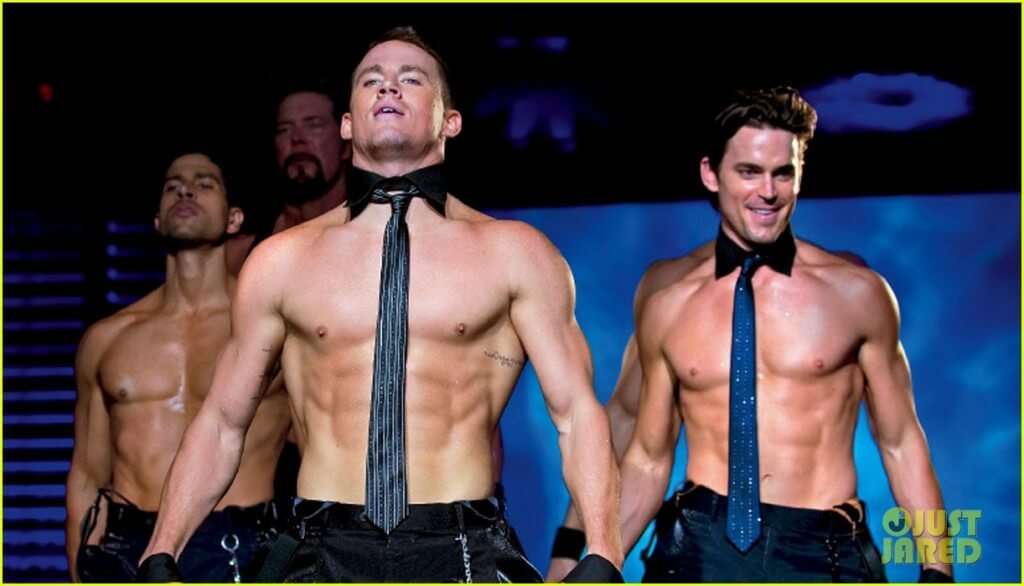