The New Bromanticism: Male Friendship Gets a Makeover

Just over half of British and American men are currently in or have had a ‘bromance’ in the past according to a survey, not by Dr Kinsey, but by Badoo (‘the world’s largest social network for meeting new people’).

The Badoo press release – issued on Valentine’s Day last week – claims that the survey of 2000 men ‘reveals the extent to which British men have embraced the “bromance” phenomenon’. We’ll get to that bit later.

What’s immediately and gratifyingly clear is that the Badoo survey doesn’t insist, as many would and have done, very loudly, that a bromance is a close friendship between two STRAIGHT men – no gayers or gayness allowed, thank you very much.

Instead, Badoo defines bromance as ‘a close platonic relationship with someone of the same sex’. And we all know about that Plato guy and those Greeks…. 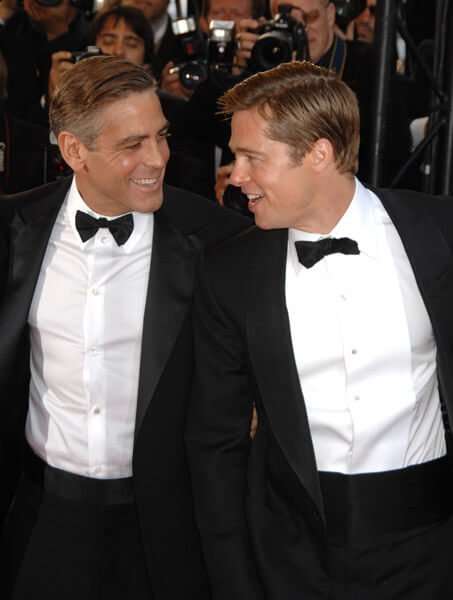 2. Butch Cassidy and the Sundance Kid

10. Simon and Will (The Inbetweeners)

It’s a crying shame that Jerry Lewis and Dean Martin didn’t make the list – but then the era that they reigned supreme as the world’s favourite ‘platonic’ male lovers was well over half a century ago. And they were probably too explicit for today’s tastes.

It’s also a shame also that the great, passionate early twentieth century psychology male double act of Sigmund Freud and Carl Jung was ignored. But I suppose that the recently-released A Dangerous Method didn’t pull in quite as many punters as Sherlock Holmes 2. And besides, it has a unhappy ending: Freud and Jung have a very messy divorce.

But Freud and Jung personify in an oddly neurotic fashion the way no ‘bromance’ is ever quite ‘pure’ of libidinal impulses: Freud famously fainted more than once in the presence of his anointed successor the young Jung, blaming it on some ‘unresolved homosexual attachment’ – the cigar aficionado considered homoerotic attraction the basis of all male bonding. And although the split occurred because Jung rejected Freud’s all-embracing libido-theory, emphasising instead ‘spirituality’, it was Jung who had the major nervous breakdown after they parted.

It was the non-Freudian Michel Foucault who, as I recall, attributed the emergence of ‘the homosexual’ to the decline in the institution of male friendship. Foucault was immensely interested in friendship:

‘As far back as I remember, to want guys was to want relations with guys. That has always been important for me. Not necessarily in the form of a couple but as a matter of existence: how is it possible for men to be together? To live together, to share their time, their meals, their room, their leisure, their grief, their knowledge, their confidences? What is it to be “naked” among men, outside of institutional relations, family, profession, and obligatory camaraderie?’

(Michel Foucault, ‘Friendship as a Way of Life’)

For Foucault, experimental friendship and ‘new relations’ was what male homosexuality was for. Or at least the bit of it that he was interested in that wasn’t about leather and whips.

The arrival of companionate marriage in the early twentieth century left increasingly little room for close male friendships – friendships which, along with greater physical affection such as kissing and holding hands, occassional passionate declarations of love, and also the custom of chums sharing bed (see Abe Lincoln), had meant that the difference between a sexual relationship and a non sexual one was largely invisible to the world. Close male friendships cover the pre-gay past with a blanket of discretion.

Perhaps the popularity of ‘bromance’ even just as a buzzword represents a resurgence of interest in close male friendship, as the medical, legal and social force of ‘the homosexual’ and for that matter ‘the heterosexual’ declines. A quarter of the Badoo respondents admit to having ‘the most fun they have with anyone’ with their bromance partner, and ‘just like Holmes and Watson’ over one in ten are ‘often mistaken to be more than friends’, while 10% of them claim to get stick from their partner for it.

Marriage is also now in steep decline, of course. Fewer and fewer people are getting hitched and if and when they do it’s usually much later than their parents or grandparents. (According to Badoo, 28% of single British men are currently in a bromance, with this figure dropping to 10% for marrieds and 15% for co-habiters.)

Before the Second World War, when working class men tended to get married in their late twenties and early thirties, the now-defunct institution of ‘trade’ gloriously filled the gap between adolescence and domesticity. And despite the name, the traffic between ‘normal’ working class lads and queer gentlemen was not always commercial or hedonistic – surprisingly often it developed into a long term and emotionally close friendship.

After being initially rather sceptical, I’ve begun to re-evaluate my attitude towards ‘bromance’. Over time it seems that the ‘romance’ part of ‘bromance’ is becoming less irritatingly ironic – and the ‘bro’ part less annoyingly fratty. And also less insistently hetty. In this Badoo survey at least, ‘bromance’ cuts right across ‘sexuality’.

Like that other annoying word ‘metrosexual’, ‘bromance’ seems to be potentially acting as a solvent of gay/straight boundaries, giving men whatever their sexuality permission to express stuff that they otherwise might not. Facilitating and encouraging close, emotional friendships between two straight men. Or between gay and straight men. Or straight and bi men. Or maybe even between – one day, in the far distant Utopian future – gay men.

The recently launched ‘Bromance’ app, a location-based network ‘that helps you organize activities with friends and nearby people with shared interests’ was mocked by many (including me until I found out more about it). The people behind the app, like Badoo, don’t insist on the heterosexuality of their ‘bros’ – and go one step further in suggesting that ‘bros’ don’t have to be male, either.

Many commenters on gay blogs seemed to think the Bromance app would be only used by ‘closeted gay men’ seeking sex on the ‘downlow’ – while the Brobible agreed, ‘aggressively opposing’ this ‘men seeking men’ app for polluting the heterosexual purity of their bro-ness.

I’ve no idea whether it will be popular or not, but the gayist and bro-ist scorn which greeted the Bromance app seems to be precisely down to the way it might facilitate new kinds of platonic friendships. And new kinds of sexual relationships. Under a blanket of smart-phone discretion. And we won’t know which is which.

Despite all the name-calling, it’s precisely the inability to define what’s going on or the people taking part that is the ‘problem’. I suspect Foucault would have been one of the first to download the Bromance app, in his  fervid search for ‘experimental friendships’. I get the feeling Michel was quite a lonely guy. (Or ‘FUCKING LOSER’ as the Brobible would put it.)

The new technology of information and communication and the new social networks it has spawned seem to be enabling new kinds of relations and experimentation away from judging eyes – and exploiting it, of course. At the same time as perhaps making us all lonelier.

A Badoo spokesperson explained why they commissioned their survey:

‘Everyone always talks about relationships and dating – but actually a bromance buddy is also really important to men. For the 44% of British men that have never had a bromance – Badoo.com offers them the chance to meet someone that’s like minded – whether that’s for bromance or romance.’

It’s not clear where Badoo found their respondents from, and I’m not sure their findings are terribly scientific. I’m not even sure what Badoo is, to be honest. But something is definitely afoot with male friendship.

Another survey published this week should certainly be taken very seriously indeed for what it says about the yearning of British men for close, intimate friendship. According to Travelodge, half of the men they asked admitted they still have a teddy bear from their childhood. A quarter admitted to sleeping with their teddy bear when ‘on business trips’. While 15% confessed they ‘treat their teddy as their best friend’ and ‘share their intimate secrets with their bear’.

Does bearmance stand in for bromance with British men? Or t’other way round?