Manlove for Ladies on Torchwood 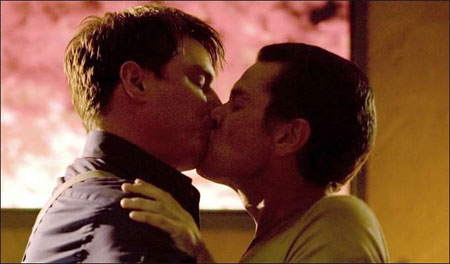 The phenomenon of manlove for ladies, which I wrote about recently, citing The Mighty Boosh snog, seems to be catching:

‘Former Buffy the Vampire star James Marsters helped fulfil one of his girlfriend’s fantasies on the set of sci-fi series Torchwood – when he locked lips with John Barrowman.

The actor plays flamboyant bisexual Captain John in the cult TV show and had to share a same sex kiss for the first time.

Marsters says, “I had never kissed a man on film before, but luckily my girlfriend was there, and she said it was always a fantasy of hers that I would kiss another man. She thought it was really hot.”‘

Torchwood was created by Russell T Davies, the writer behind the hit drama Queer As Folk set in Manchester’s gay village – a series whose success was largely down to its huge popularity with women. Probably because it was basically: Take That Finally Get Down To It.

Speaking personally, John Barrowman is about as unsexy as you can get – even with James Marsters dressed as Adam Ant plastered all over his face.

But what do I know? It’s the ladies calling the queer shots now.