Joe Orton has been pricking up my ears lately.

On a recent visit to London, thanks to the randomised wonder of ‘dating apps’ – or online cottaging – I found myself, as you do, visiting someone I didn’t know terribly well but wanted to get to know much better. He happened to live very close to Noel Road, Islington. This is the road where, at No.25, the 1960s queer playwright and keen old skool pre-internet cottager Joe Orton famously lived – and died, fifty years ago next year – in a bedsit with his rather less successful, less attractive, less popular, but possibly more talented, older partner and co-conspirator, the would-be novelist and dodgy toupee enthusiast Kenneth Halliwell. 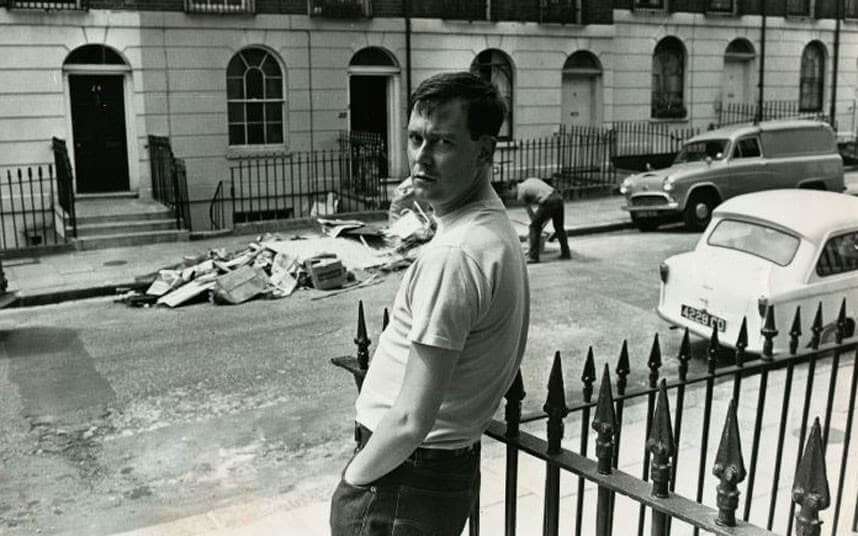 Having walked the length of it on the way to my ‘meet’, and past No.25 with its plaque, I can report that Noel Road is no definitely longer the slightly slummy street of rooming houses it was in Orton’s time. Full of new Porsche’s and Jaguars, the street’s rooming houses seem to have mostly been turned back into very wealthy, if rather lonely family homes. With no doubt the very latest in Wallpaper magazine interior design and decor.

But I expect none of them have anything like the seriously classy wallpaper that Joe and Kenneth had in their bedsit flat at 25 Noel Road. Apparently angered by the ‘rubbish novels and books’ – and perhaps by the poor quality of the general culture they found themselves sentenced to in late 50s early 60s Britain – they used plates culled from books purloined from Islington Central Library to cover the dingy walls of their 16 x 12 room.

Public-spirited vandals, they selflessly improved the dust-jackets of some of the dusty books with their own collages – replacing them on the library shelves, Orton sometimes observing at a distance people’s reaction to their irreverent sabotage: ‘I used to stand in the corners after I’d smuggled the doctored books back into the library and then watch people read them. It was very fun, very interesting.’ 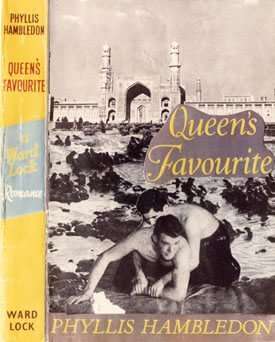 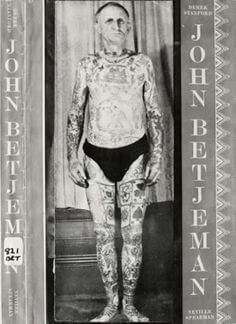 The art deviant odd couple eventually had their collars felt by Lilly Law and were sentenced in 1962 to six months imprisonment – a harsh tariff for first offenders which Orton put down to the fact that the judge had realised ‘we were queers’. The case made the national press, with Orton’s working class family in Leicester only hearing about it after reading a report in the Daily Mirror: ‘Our Joe’s been nicked!’ exclaimed Mr Orton to Mrs Orton. The custodial sentence, served in separate prisons, seems to have broken Halliwell, who tried to commit suicide, but was the making of Orton who emerged determined to shock more than just a few fortunate readers at Islington Central Library.

In a sense, their criminal collage was the only joint work which was a ‘success’, or at least reached a wider audience. It was also Orton’s first, minor taste of notoriety, before his first play ‘Entertaining Mr Sloane’ became a huge hit and scandal three years later in 1964, with its dramatic ‘collage’ of British hypocrisies. It was also Halliwell’s last. Not counting his posthumous fame for murdering Orton by attacking his celebrity head with a hammer in 1967 in a drug-fuelled, possibly jealous and/or paranoid state – splattering his brains all over the collage-covered walls.

Last Sunday BBC Radio 3 also pricked up my ears, airing ‘The Visa Affair’ (which you can listen to for the next month) – a fine adaptation by the novelist Jake Arnott of a previously ‘lost’ and incomplete work of Orton’s about his Byzantine attempts in 1965 to obtain a visa to visit the US to oversee the Broadway translation/production of ‘Mr Sloane’.

The prison sentence he’d served for the collages, together with the nature of the crime itself – denoting, in disapproving American official eyes, ‘moral turpitude’ – meant he had to go through a series of darkly comic interviews with US bureaucrats and doctors at the US Embassy in London, which as Arnott points out in his introduction to his adaptation, closely resembles the kind of officious absurdities his own plays lampooned.

This is much more than just an adaptation, however. Partly because, as Arnott explains in his introduction to the play, ‘The Visa Affair’ was incomplete, and partly because it could not, pre decriminalisation of male homosexuality (which happened in the UK in July 1967 – the month before Orton’s death) ever be really completed. Orton could not be ‘completely’ honest with either the US Embassy or the British public about the real nature of the ‘conspiracy’ between him and Halliwell and the motivation for their cultural sabotage.

Hence Arnott adds scenes set in the infamous tiny bedsit that deftly and touchingly explore Orton and Halliwell’s conspiratorial (“‘breath together’ – that’s what ‘conspire’ means”) relationship, how Halliwell cultivated and tutored Orton’s talent, and their shared darkly comic – ‘camp’, if you will – sense of humour. Anatomising their ‘crime of passion’.

Although I very much enjoyed the film version of Alan Bennett’s play ‘Prick Up Your Ears’ when it was released in 1987, I think Arnott captures something much more convincingly intimate. As well as a boyish vulnerability in Orton that Oldman’s swaggering, slightly renty portrayal obscures with bravura. Sexy bravura to be sure, but perhaps bravura all the same.

Arnott’s ‘The Visa Affair’ achieves something remarkable: it lets you glimpse what Joe might have seen in his bald, impossible, unpopular and ultimately murderous ‘flatmate’. 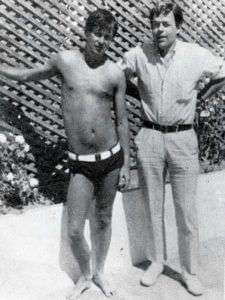 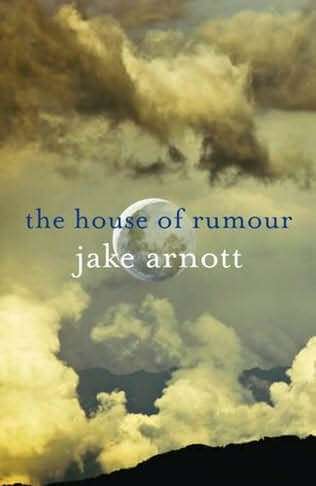 My good friend the novelist Jake Arnott has a new book out.

It’s always dicey when friends publish. Fortunately though, Jake is a prodigously talented writer and The House of Rumour is rather wonderful. Rather fantastical.

Mark Lawson wrote a good review of it here.

A conspiracy thriller filled with bewildering connections, dark conjecture and arcane information, The House of Rumour perhaps most resembles The Da Vinci Code, rewritten by an author with the gifts of characterisation, wit and literacy. It may be the ideal holiday read for those who like to take their brains with them on vacation.

Exploring the overlap between science fiction, utopianism, the occult, counter-intelligence ‘black ops’, space travel and that most deceptive of human delusions of all – romantic love – The House of Rumour is a kind of horoscope – or Tarot reading – of the Twentieth Century. Does it add up? Or is it all bunkum? Well, as ever with these kind of consultations, that’s largely up to you.

And for me it worked, magically.

The blend of reality and invention converges in a cast of colourful characters, many historical, such as Ian Fleming and Aleister Crowley (who featured in Arnott’s last book The Devil’s Paintbrush), and others fictional, or factional. My personal favourite is Rudolf Hess, Hitler’s favourite and deputy, who was in his way a kind of counter-factual factual character. His mad and mysterious night flight to Scotland in 1941 to negotiate a peace treaty with the UK on the eve of Nazi Germany’s invasion of the USSR, and source of many a conspiracy theory, serves as a kind of central narrative arc – or at least, a poetically illustrative one.

In a way, his mad moon-shot (he flew under a full moon as ‘bright as a searchlight’) undertaken for love of his Fuhrer, was Hess trying to write his own counter-factual history of the Second World War. He failed, of course, but spectacularly.

Hess was very superstitious and chose the date for his mission after consulting astrologers (and there’s some suggestion here that Hess was lured to Scotland ‘black ops’ activities by Satanist Crowley, under the direction of Ian Fleming). In captivity, Prisoner Number 7 becomes obsessed with the Space Race and the 1969 Apollo moon landings, seeing in them the final victory of the Nazis. Hess of course launches himself into space successfully in Spandau Prison in 1987: hanging himself by the neck until dead.

And perhaps Hess wasn’t quite so mad. After all, the American space programme was led and staffed by Nazi rocket scientists, and as Arnott reminds us, Voyager 1, NASA’s envoy for humanity launched in 1977 and currently leaving our Solar System, carries a recorded greeting about peace and friendship from a former Nazi, Kurt Waldheim, the then Secretary of the United Nations.

Fans of Arnott’s work will know that he likes to populate it with perverse sexuality (not that there’s really any other kind, mind). In The House of Rumour Ian Fleming’s boss, on whom he based ‘M’ in his James Bond books, is a paranoid, manipulative closet-case. While a house guest of Fleming and his wife Ann at Goldeneye, Jamaica, walks on a highly spirited S&M scene between them involving hair-brushes.

And in a much-cherished passage the British intelligence officer charged with interrogating Hess in Spandau picks up a black bobbed high-heeled lady of the night whom he suspects/hopes may be in the same deceptive business as him.

‘But what do you think is in there?’ she asks, a gloved hand still holding him by the hair.

He feels the pressure sores as his bony knees dig into the floor and a tremor of arthritis in his right hip. His old and withered flesh is cramped and weary, trembling. She places her other hand between her thighs, lets out a little burlesque purr.

‘People often wonder what I’ve got down here,’ she says. ‘There’s uncertainty. You like that, don’t you?’

She was right. That was what he liked. Subterfuge.

‘Yes. Well, it doesn’t have to be one thing or the other, does it?’

She lets go of his hair and slaps him across the face, sending him sprawling onto the floor.

She pulls on the leash and he is up on his knees once more.

‘You have to concentrate. This is a thought experiment.’

‘Until you look at it,’ she goes on, adjusting the straps on her satin cache-sex, ‘it really does exist in two different states at once. It’s Schrodinger’s pussy. Now close your eyes and see what’s real.’

Like Schrodinger’s pussy, The House of Rumour is well worth checking out.

Reasons to Be Cheerful, presented by Jake Arnott

My good friend the novelist Jake Arnott presents next Saturday’s instalment of BBC Radio Four’s antidote to grumpiness series ‘Reasons To Be Cheerful’.  He looks at the astonishing changes in attitudes towards sexuality and masculinity in the past few decades, arguing they offer men much greater freedom of choice and expression than in the past.

Because he’s a good friend and because he’s a very generous and charitable chap he invited me to contribute.  I tried my best to be grumpy, but Jake is so charming I couldn’t quite keep it up.  I think I may even have ended up talking about how much I liked Soho.