WARNING: hipsters and gay bears may want to watch this ad backwards.

I’m rather taken with this refreshingly direct ad currently airing on MTV for a Philips Norelco product that promises to ‘shave, style and groom’. And also you’d be forgiven for thinking, suck your cock. 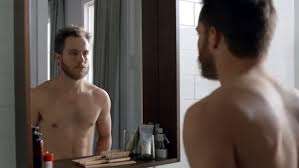 A young man approaches the mirror, face and chest hidden by unruly red hair. He reaches for his versatile buzzing buddy. After tackling his face fuzz, he despatches his chest rug, then his abs fur. As he ‘manscapes’ himself into something sexier (to beardist, hairist me at least) – something pornier –  his confidence improves and he tells himself flirtatiously: ‘I’d catch some rays with me’… ‘I’d play beach volley-ball with me’… and the rather adorable: ‘I’d wear silly sun hats with me’.

Finally, by the time he’s reached the third head on his humming toy he’s openly turning himself on: ‘I’d f*ck me’ he says matter-of-factly gazing at his own reflection.

The ad is funny and memorable largely because it confronts head-on what too much advertising for men’s beauty products, particularly ones for the American market, try desperately to disavow – male vanity and sensuality. Even as they’re exploiting them. It goes so far as to joshingly play with one of the scariest things for marketers about male narcissism – the way it can shade into male homoerotics. An eye for male sexiness, even your own, might just turn into male sex.

If Men’s Health magazine had been the client for this ad the final line would have been cut at the first script meeting, along with the silly hat moment (too gay and too funny), and a glamorous beard (of the female variety) would have appeared in the final frame. And judging by their pointlessly Puritanical covers of late, our chap would have had to wear a baggy dark grey t-shirt while shaving his chest.

Of course, it’s taken for granted that Philips’ young manscaper is talking about scoring babes – and his possibly slightly ‘douchey’ auto-flirtatiousness, like the silly sun hat, is meant to be taken as proof that he is secure in his (metro)sexuality. But equally, he’s probably secure enough to experiment with a ‘different head’ sometime.

Most of all the ad communicates the importance of self-love and self-care in modern masculinity. If you want to score with the babes you have to score yourself first.

Dutch-owned Philips have been a consistent trail-blazer in regard to men’s burgeoning desire to be desired and need to be in control of their man-garden – in the mid Noughties they introduced the historic Bodygroom. (I have one myself – with an extendable handle to reach my back: Oh, the horrors of middle age.) Their marketing campaign then was also humorous, but very coy – involving kiwi fruit and an ironically boring man in a big white dressing gown talking about the ‘optical inch’. 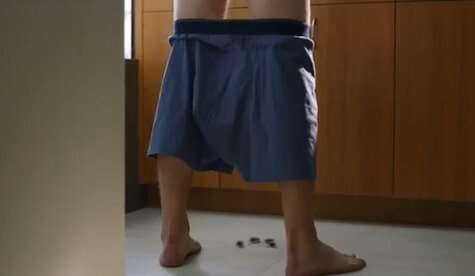 Take a visit to their ‘I’d FAQ me’ website. You’re really getting right up close and personal as you zoom around and into this male model’s body.

Don’t know about you, but by the time I got to the end I felt I should have at least offered the guy my number. Or a Kleenex.