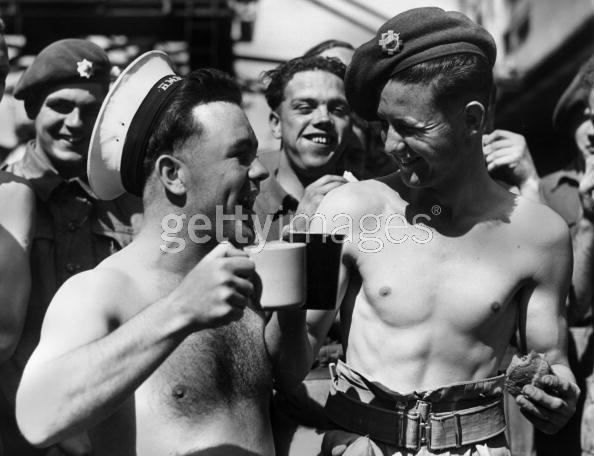 Trading in the past: Queer London

Once upon a time the streets of the capital heaved with jolly sailors and guardsmen looking for gentlemen to have fun with. Then gay liberation came along and ruined it for everyone, moans Mark Simpson

I consider myself something of a traditionalist. I enjoy traditional activities, such as cruising the Dilly, picking up guardsmen, sailors, dockers and young working men.

I am, in other words, a hopeless romantic. For ‘trade’, the masculine erotic economy which girded the loins of the greatest city in the world, lubricated the pistons of the greatest Empire and made saucy sense of the British class system is gone forever. The docks have gone, the sailors and guardsmen are all but gone – and, criminally, don’t wear their uniforms on the street any more, making them very difficult to spot. And as for the working men, well, they all live so far out of town these days and drive so fast in their white vans that it’s almost impossible to collar any.

All that’s left is a gay disco in the East End called, mockingly, ‘Trade’, where you can find shirtless gay lawyers on horse-tranquilizers eyeing one another up while dancing frantically at 5am. If you really want to.

Gone too are the painted queans, such as Quentin Crisp, and the respectable gentlemen in evening dress who pursued trade – trade who, for sex, for violence, for love, for money, for a few beers, for something to tell their mates about, frequently allowed themselves to be caught. Gone are the jostling, smoke-filled “known” (not “gay”) pubs. Gone is the whole vibrant and complex pre-gay bachelor world of male-male intimate relations that meant that perhaps most sexual activity between men before the 1967 decriminalisation involved men who were not queer. What we now call “homosexuality” or “the gay scene” was a much, much bigger business before so-called liberalisation.

Contrary to received wisdom, today’s out-and-proud gay world is in some ways a marginalised, airless, incestuous one compared to what went before in the “bad old days”. It’s only in the last 30 years or so, in other words, the period corresponding to the rise of “gay liberation”, that we have begun to believe that to have sex with another male you have to belong to a separate species. That, regardless of your interest in the ladies, if you wake up in bed with another male you have to move to Old Compton Street or the Castro, pronto.

As Matt Houlbrook’s Queer London: Perils and Pleasures in the Sexual Metropolis 1918-1957 makes remarkably clear, just a few decades ago, significant numbers of (working-class) young men were not only moving freely between male and female partners but were happy to brag about it. So long as they were “butch” and active – or claimed they were – it would merely enhance their reputation with the lads. It certainly didn’t mean that they were “confused about their sexuality”.

Though you, dear reader, may be about theirs. It is, after all, a world that is almost unintelligible to us today. Even my nostalgia for “traditional” activities is precisely that: nostalgia. A slightly perverse, contemporary projection onto the past – a past that is now too “queer” and unfamiliar to grasp fully, possibly even by those who are still alive to remember it. As Houlbrook puts it: “Working class encounters with the queer transcended contemporary understandings of ‘homosexuality’ or ‘homophobia’. Intimacy, sex, blackmail, theft, and assault constituted a continuum…” A rather more exciting continuum than most homos today can handle – or would want to.

Perhaps this is why many gays today simply refuse to believe such a world existed, except as some failed prototype for the wonderful, self-contained, self-centred gay world they now live in: “God, all those sad, oppressed, self-hating homos chasing after straight men – why didn’t they get themselves down to the gym and buy some camouflage trousers?”

Thankfully, Houlbrook isn’t one of those gays. He’s a historian. “The world mapped out in this book is not a ‘gay’ world as we would currently understand it,” he writes. “The places are different. Soho has retained its importance, but today it seems almost impossible that Waterloo Road or Edgware Road could have been the site of equally important, diverse, extensive, and vital queer enclaves between the wars.” Edgware Road was the site of a large barracks; Waterloo Road the home of the Union Jack Club, a hotel for hundreds of randy young sailors on leave. As one contemporary put it: “The Waterloo Road was awash with seamen, most of whose bodies… were not only able but willing.”

Queer London, with chapters on “Geographies of Public Sex” and “Piccadilly Palare: the world of the West End poof” (spot the Moz reference) goes out of its way to present a map of London’s queer past that doesn’t merely see it as a world that was struggling to turn into Soho during Pride Week: “In exploring the history of queer London in the first half of the 20th century, we should lament possibilities long lost as we celebrate opportunities newly acquired.”

Obviously, it is the lost possibility of sex – and loving relationships – with sailors, soldiers and young working men men that I most lament. So does Houlbrook; or, at least, he sees this as the crucial difference between London’s contemporary gay world and its queer past. Unlike many other recent urban gay histories, this book gives equal attention to those who considered themselves “normal” but nonetheless socialised with, had sex with, and often loved other men. In other words: trade. The men who were at the very centre of the queer erotic economy and without whom Saturday nights in 1930s Soho would have been very dull indeed.

So we learn that “the most distinctive venues” were either military pick-up joints like the Grenadier (Wilton Place), Tattershalls Tavern (Knightsbridge Green), the Alexandra Hotel (Hyde Park Corner), and the Packenham and Swan (I’ll be visiting them all very soon, just to make sure they’re no longer “in business”); or those in working-class neighbourhoods in east and south London: dockside pubs like the Prospect of Whitby (Wapping Stairs), or Charlie Brown’s (West India Dock Road). In these venues, dock labourers, sailors from across the world, and families “mingled freely with flamboyant local queans and slumming gentlemen in a protean milieu where queer men and casual homosexual encounters were an accepted part of everyday life”. Perhaps Houlbrook is a little nostalgic too, after all.

To regard London’s trading scene as merely “prostitution” or “exploitation”, as many are inclined, is again to impose modern, patronising values on transactions: “Working men’s desires were more complex than the term ‘prostitution’ allows.” Money was not always exchanged (especially with sailors), but even when it was, most of the “normal” men trading themselves had jobs. For the most part, trade was an enjoyable and rewarding pastime activity that could also become a lasting emotional attachment.

Guardsman were notoriously rough renters (very capable of blackmail and violence, which was perhaps part of their appeal), but as one interviewed in 1960 admitted: “Some of us get quite fond of the blokes we see regularly… they’re nice fellows… and interesting to listen to. As for the sex… some of the younger ones aren’t bad looking…”

Or like the newly married Jim writing rather sweetly to his gentleman friend, John Lehmann: “I wish I was still seeing you Jack as you were the best friend I ever had… you were always such a good friend to me we had good times together Jack and I hope I shall see you some time.” Trade was a young man’s game, which usually lasted only for the period between adolescence and marriage. Once married, working-class men and their unruly erections would “move on”.

Why did the world of trade end? In part, because, like Jim, it got married. The post-war years saw a rise in prosperity which not only undermined the economic rationale for trade, it also made marriage possible much sooner. Rather than getting married in their late twenties and early thirties, young men were marrying in their late teens and early twenties. The rough and tumble world of “raucous male homosociality” was disappearing. Young men were socialising much more with women, who were now entering public life with money to spend themselves (and today, if the tabloid stories are to be believed, are lining up to be smuggled into Knightsbridge Barracks). Trade ended because the bachelor-culture of pre-war London ended.

Ironically, the final blow to trade and the public world of queer sex was delivered by Wolfenden Report of 1957 and the Act which decriminalised sex between consenting adult males in private 10 years later.

Key Wolfenden witnesses, Patrick Trevor-Roper (a Harley Street consultant) and Peter Wildeblood (diplomatic correspondent for The Daily Mail) pleaded for homosexual respectability in the language of the private middle-class home (sounding uncannily like gay marriage lobbyists today). Wildeblood claimed: “I seek only to apply to my life the rules which govern the lives of all good men; freedom to choose a partner and… to live with him discreetly and faithfully… the right to choose the person whom I love.”

However, as Houlbrook points out, both witnesses glossed over the queer spaces in which they were going to meet that partner. Wildeblood famously met the airman McNally in a Piccadilly Circus subway; Trevor-Roper was cautioned by a policeman in St James’s Park, a veritable bazaar for strapping Guardsman during the war.

To which I might add that for Wolfenden the “real perverts” were not the “congenital inverts”, but the “otherwise normal men” who took part in these aberrant activities, often in public. This is why prosecutions for indecency actually doubled in the 10 years following “decriminalisation” in 1967 (many of those convicted were married). Wolfenden, which was also a report into street prostitution, encouraged the law to go after the “real perverts”. All male sexual contact involving those under 21, those staying in hostels or hotels, rooming houses or prison, meeting in parks and public toilets (they were not “in private”), or while serving in the Armed Forces and Merchant Navy, remained illegal. In other words, probably the vast majority of homosex in the earlier part of the 20th century.

Even the consensual activities that led to the Montagu Scandal and public backlash which prompted the Wolfenden Report and eventually the 1967 reform itself would still have been illicit after ‘decriminalisation’ as they involved members of the RAF and were not conducted ‘in private’ – and would remain so for much of the next 40 years.

It’s probably just more sour grapes on my part, but it’s tempting to conclude that the law reforms of the last few years, such as the equalisation of the age of consent, ending the ban in the Armed Forces and Merchant Navy, and relaxation of the laws on ‘soliciting’ and “indecency” in public, happened not so much because of the tireless campaigns by gay equality reformers, or even the intervention of the European Court of Human Rights, but simply because, one or two cruisey parks aside, most “traditional activities” in London had already come to an end.