There’s nothing quite so deafening as the sound of liberal America tutting. Mostly, in this instance, they’re deafening themselves. To the sound of their own hypocrisy.

The 58-year-old Pulitzer prize winning sports journalist and best-selling author Buzz Bissinger caused a minor tsunami of scandale, disgust and derision a week or so ago with a bravely barnstorming confessional piece in GQ in which he admitted – well, boasted, really – that he is a ‘shopaholic’ who has blown vast sums on Italian designer clothes.

Not that he’s counting. Even worse than the ‘feminine’ weakness this parade of sartorial self-indulgence suggests is the fact he refuses (like the model Andrej Pejic – though perhaps to slightly different effect) to distinguish between men and women’s clothes:

‘Some of the clothing is men’s. Some is women’s. I make no distinction. Men’s fashion is catching up, with high-end retailers such as Gucci and Burberry and Versace finally honoring us. But women’s fashion is still infinitely more interesting and has an unfair monopoly on feeling sexy, and if the clothing you wear makes you feel the way you want to feel, liberated and alive, then fucking wear it.’

Well said, Mr Bissinger. But unfortunately, this is still something that America doesn’t want to hear. At least when it’s men saying it. (Jezebel for his pains described him as ‘twisted’, ‘disgusting’, ‘selfish’ and ‘abominable’.)

‘The opposite, to repress yourself as I did for the first fifty-five years of my life, is the worst price of all to pay. The United States is a country that has raged against enlightenment since 1776; Puritanism, the guiding lantern, has cast its withering judgment on anything outside the narrow societal mainstream. Think it’s easy to be different in America? Try something as benign as wearing stretch leather leggings or knee-high boots if you are a man.’

Whatever you may think of the end result or the fortune spent on Italian designer clothes achieving it, Bissinger is undoubtedly rebelling against Puritanical – liberal as well as conservative – expectations of how middle-aged, upper middle class white men should dress: Brooks Brothers preppy or, if they’re feeling brave, a conservatively-cut designer suit. And how they should spend their money: on their wives, on their spawn, on property and cars and yachts and perhaps, if they must, a discreet cocaine habit and the occasional call-girl. But definitely not on sexy stretchy leather leggings.

But Bissinger wasn’t prepared to leave his Fuck You to American propriety there, standing coquettishly in stretchy leather leggings. He deliberately invited his uptight readers to sit and swivel by talking explicitly about the very thing that scared America about metrosexuality – the male bi-curiousness this male desire to be desired might betoken:

‘I never fit the traditional definition of a sexy male straight or gay—tall, ripped, six- packs within six-packs. I wanted the power that sex provides, all eyes wanting to fuck you and you knowing it, and both men’s and women’s clothing became my venue.’

All eyes wanting to fuck you and you knowing it.

The male desire to be desired, in other words. If Bissinger had accessorised sexiness to himself by building an extension to house his own gym, hiring the most exclusive personal fitness trainer in town, drinking nothing but protein shakes and taking vast quantities of human growth hormone then there would have been no scandal. At worst a bit of eye-rolling. Bodybuilding and sculpting as a way of persuading ‘all eyes to fuck you’ is acceptable in America nowadays, even for middle aged men – perhaps because of the fig-leaf provided by the faux masculine labour and dignity of ‘working out’. Of ‘lifting’. But for men to accessorise sexiness through clothing is just… European effeminacy. Fag stuff.

Bissinger knows this. And wasn’t afraid to address it with his own experience:

‘Was I homosexual because so much of what I wore is associ­ated with gays? I did experiment. And while I don’t think it is my sexual being, I can tell you that gay men as a group are nicer, smarter, have a shitload more fun than straight whites. Was I veering toward becoming a dominant leather master in the S&M scene, the leather fetish an obvious influence in most of the clothing I purchased and in much of high fashion itself? I did experiment. Was I a closeted or maybe not so closeted transvestite? Tom Ford makeup is divine; the right foundation and cheek blush and eyeliner and lipstick can do wonders for the pallid complexion. Thigh-high boots add to any wardrobe, although walking on six-inch stilettos for hours is just a bitch and therefore confined to the privacy of my house, seen only by the UPS man, who at this point could not possibly be surprised by anything. But a dress or skirt just doesn’t look good on me, and I can’t ever do a thing with my hair. The look I was going for was more David Bowie androgynous. It  wasn’t successful.’

I suspect the final sentence is something of an understatement. But we don’t have the UPS man’s verdict. Though full marks to Bissinger for having the balls to try that look at all, let alone answer the door in it.

The confession of gay and S/M experimentation naturally added an extra hypocritical frisson to the liberal disdain for Bissinger’s revelations. Slate magazine, in a shining example of clenched scorn dressed up as concern, even cited his sexual experimentation as the proof of why he is obviously seriously mentally ill. (Probably next to yet another article about the essential importance and dignity of gay marriage.)

Bissinger does describe his behaviour repeatedly as an ‘addiction’ and mentions passingly in his piece that he’s receiving treatment for being mildly bi-polar. But in the prescription-happy US hasn’t everyone now been diagnosed as mildly bi-polar?

By far the most ‘crazy’, provocative, flagrant, unforgivable and un-American aspect of his confession is that while he does seem to be aware he has a problem – given the vast sums he compulsively spends on clothes that he often forgets he has and buys again – when his new flawed, driven, stretchy-panted metrosexy self is set against the button-downed, buttoned-up bourgeois in Brooks Brothers blazers he was bred and braised to be, he doesn’t appear to regret any of it. 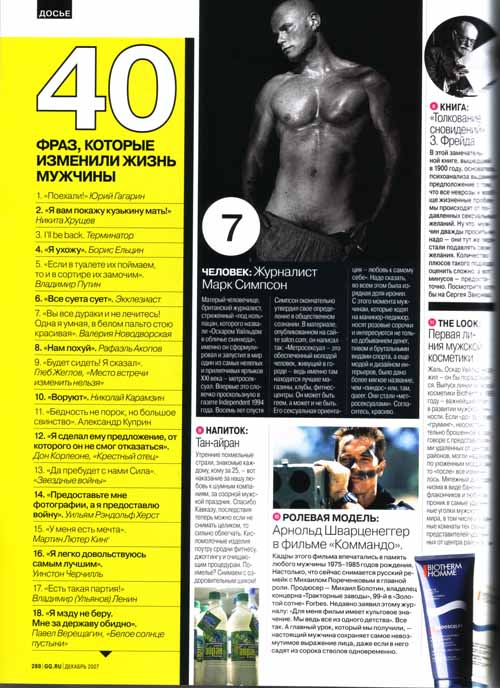 From this month’s GQ Russia.

My Russian is a little rusty, but I think the piece from this 50th anniversary of GQ issue is about ‘Forty Things That Changed Men’s Lives’.

I’ve no idea what GQ has to say about me, but all I care about is that:

And had Freddie’s body and face. Or Beck’s airbrusher. (See below.)