Love Reaction (Give Me Satisfaction)

About a decade ago, I visited my Queen is Dead pen-pal/co-author Steve Zeeland when he was living in the largely-forgotten US Navy town of Bremerton, WA. Forgotten, that is, save by the self-described ‘lover of sailors’.

In the early 1980s, before he discovered his true, bell-bottomed love, Steve had been the frontman for industrial-electro band Zyklon (‘America’s answer to Throbbing Gristle, according to one critic). He still had several synths and sequencers which we fooled around with at his place in a 1940s apartment building, conjuring up aural ghosts from the 1980s.

For some reason Steve got it into his head that I should record a cover: ‘Mark, you have a lovely speaking voice – I’m sure your singing voice is even better.’

As the careers of several mediocre UK pop acts bears testament, Americans can be absurdly over-generous to their transatlantic cousins.

Despite a heavy cold and very English reluctance, I eventually complied – choosing to cover Divine/Bobby O’s 1983/4 hit ‘Love Reaction’. Which of course was a kind of re-gayed, Hi-Energy cover version of New Order’s de-gayed, low-energy ‘Blue Monday’. One the Mancs liked so much they reportedly played as an encore at one of their own gigs. Or perhaps they were just being ironic.

I’m decidedly no Divine, so I decided to take my cover of ‘Love Reaction’ in a more Bernard Sumner/Dame Edith Sitwell direction.

This – after tireless editing and remixing by Steve – was the result. I’d like to think of it as my own stab, two decades too late, at early 80s synthpop. (The doggie-style concrete ballet vid, dancing around whirring blades, was shot by Steve out of his apartment building window, after I returned to the UK.)

Love Reaction: (Steve Zeeland Made Me Do it) 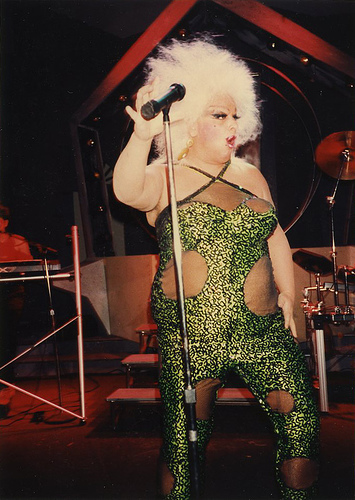 Every now and then, you will need a friend for… Love Reaction

A distinctly not-for-profit tribute to the late great Divine, dance genius Bobby O, synth-scallywags New Order, and my American writer pal and former alt-pop star Steve Zeeland, recorded late-night in his living-room in Bremerton, WA a couple of years back. (The ‘promo’ video in which a construction worker ‘dances’, on all fours, to the synth-beat, was also shot by Steve — out of his apartment window.)

For all Steve’s production skill, there’s no disguising that the vocalist isn’t as talented as Divine.

But he’s almost as scary.