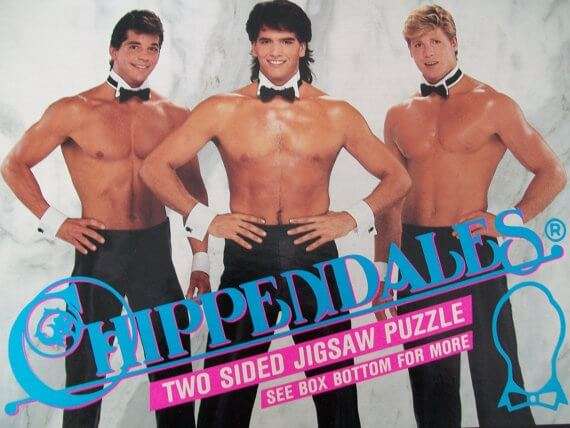 Faaaaaaaaaab.U.Lous!: How the Chippendales Oiled Up the Male Body

The Chippendales have a lot to answer for.

Not to mention those dangerous oily patches on the floor of the Queen Vic after amateur male stripper night.

Forget Reagan, Yuppies or Madonna, the greatest and hottest product of the 1980s, that decade of unbridled appetites, was hot pectoral muscles basted in baby oil.

If ever you needed proof that women have no taste in men you just have to look at the tremendous, ear-splitting, panty-moistening, glittery global success of the Chippendales: a dance troupe presenting a vision of the male body as a cross between a dancing bouncer in a thong and an especially orange department store perfume demonstrator. Mind you, they also prove how men have no taste in men either – the Chippendales were after all the pneumatic offspring of a man. A man who seems to have had a lot to answer for on his own account.

‘”Do you know anyone who would want to kill Nick DeNoia?”‘ asks the cop investigating the murder of the choreographer who ‘basically invented the Chippendales’ in the prologue to ‘Unzipped: A True Story of Sex, Drugs, Rollerskates and Murder’ (Canongate), David Henry Sterry’s account of his time as the male strip troupe’s roller-skating MC. ‘”Do you want the short or the long answer?”‘, Sterry replies. Of course, we get the long answer, which is Sterry’s personal memoir, which, disappointingly, is more about Sterry than DeNoia.

The short answer, well-known because the sensational case was widely-reported and spawned at least one TV doc, is that Nick DeNoia was sent to the big dance studio in the sky by a hit man hired by his Indian business partner Somen Banerjee over an argument about who owned the lip-smackingly lucrative touring rights to this troupe of fritzed faux-flashers (faux because they never actually let you see the goods). Banerjee was caught trying to put a contract out on some other associates and committed suicide in prison before his likely conviction so that ownership of the company would pass to his family. (See, I told you that male stripping was a very serious business.)

The long answer, Unzipped, with its stories of ‘$‘ (as Sterry denotes money) drugs (the strippers were apparently selling them to the punters) and backstage blow-jobs (some lucky, lucky ladies did get to handle the goods) and bust-ups (the ‘Men of Chippendale‘ were very, very bitchy), is enjoyable, funny, and almost as meticulously choreographed as a Chippendale show. Sterry writes about his 80s life with the Chippendales in the kind of pulpy fashion that is required these days, along with a large admixture of self-loathing and self-mockery.

He keeps referring to himself as the ‘ugliest man at Chippendales’, and laments his ‘invisibility’, and seems to have only garnered one blow job, which was only offered because the girl wanted an introduction to one of the strippers (it ended abruptly when the girl was nearly ill). We also get some flashbacks to an unhappy childhood. This is Sterry’s second memoir: his first, ‘Chicken: Love For Sale on the Streets of Hollywood’, was an account of his time as a teenage gigolo in LA – a job he was introduced to by his boss at the fast-food join he fried chicken at. For someone who isn’t a looker, that’s to say not very appetising, Sterry seems to have made something of a career out of the sale of manflesh.

The real star, however, of Unzipped, as Sterry’s prologue more or less admits, isn’t Sterry, or the male strippers, or even the sozzled screaming ladies clawing and biting at the ripe manflesh jigging around in front of them, but Chippendale choreographer Nick DeNoia, ‘silver fox in cashmere clothing, combination queen mother and charismatic dictator’. A man that Sterry himself seems to love as much as he hates. DeNoia’s theatrically sadistic swishy Drill Sergeant way of publicly humiliating people is, as he puts it himself: ‘Faaaaaaaaaaaab.U.Lous’.

DeNoia’s sharp queer eye is literally what made the Chippendales. While the Chippendales’ ‘bottom line’ was all about pleasing the ladies and prying open their purses – the top line was about pleasing DeNoia by showing him your buttocks, which he seems to have pried open with his eyes. Little wonder that at Chippendales ‘the notions of hetero-, homo-, and bisexuality seem hopelessly outdated. Gay? Straight? Seems like under the right circumstances everybody’s capable of doing anyone.’

Wannabe Chippendales had to submit themselves oiled up in a thong to the pointed gaze of DeNoia, a critic who makes Simon Cowell look like someone you’d like to share a pint and your problems with. In fact, if DeNoia were still around today Cowell would be his Louis Walsh.

One NY Latino guy dares to turn up a little overweight to a ‘viewdition’. DeNoia, standing ominously behind him, grabs his love-handles and squeezes, painfully. ‘”That. Is. Un. Acceptable…”‘ he decrees. ‘”The Men of Chippendales are not fat. It’s disgusting, it’s laziness, it offends me. Do you think a Lady wants to come to Chippendales to see a pudgy, fat little fuck? Helloooooooooooo?”‘

The Latino doesn‘t seem to mind. He just smiles and replies: ‘”Hhhey, tha’s jus’ more of me to lub!.”‘

DeNoia is impressed by the man’s pluck – ‘”I like spunk”‘ – and commands him: ‘”Go. Leave. Make yourself beautiful. Call me.”‘ Which is, from DeNoia, a tender dismissal indeed.

Twenty years on, in a world conquered by metrosexuality and covered in baby oil, we can see that men did indeed make themselves beautiful. Terrifyingly beautiful. Being ‘lubbed’ in a thong is what men seem to aspire to today.

DeNoia’s heavenly – or hellish – cellphone must be ringing off the hook. 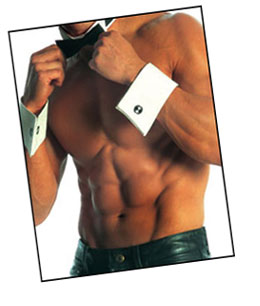 This  is one of the pieces collected in Metrosexy.