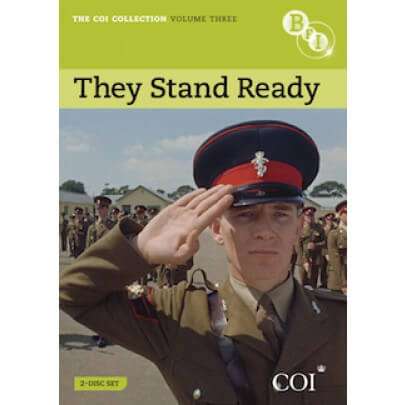 As a boy growing up in the 1960s and 70s I was raised to fight The Second World War all over again. Airfix models. Commando comics. Air tattoos in June. Watching The Battle of Britain and The Longest Day on telly with my dad, just so I’d know what to do if I ever found myself pinned down on a Normandy beach or with an Me 109E on my tail.

All of which made me easy prey to an RAF recruiting film shown at my school about a buccaneer squadron training sortie from Gibraltar, set to a Vangelis soundtrack.

I promptly signed up to the air cadets and spent Tuesday afternoons and a week or two in the summer hols wearing itchy shirts and a Frank Spencer-style beret, learning how to march without falling over. I loved it, and would probably have signed up for the real thing if it hadn’t been for a sixth-form flirtation with Quakerism.

Alas, that old recruiting film isn’t included in They Stand Ready, a new collection of Central Office of Information (COI) armed forces recruitment and propaganda shorts made between 1946 and 1985, released by the BFI. But several similar ones are, including Tornado (1985), about a simulated attack on a Warsaw Pact surface-to-air missile site, and HMS Sheffield (1975), about life onboard a Royal Navy frigate (that was later hit by an Exocet during the Falklands war with the loss of 30 lives).

With their promise of escape from humdrum life, opportunities for new mates, good times, foreign travel and playing with really expensive toys – though strangely silent on the possible physical cost – these films offer a glimpse into the listless, regimented world that was mid-to-late 20th-century civilian Britain, waiting impatiently for Xboxes, EasyJet, the internet and proper drugs to turn up.

Perhaps it’s because prime minister David Cameron is around the same age as me – or possibly because the armed forces, or at least the army, are still largely run by lah-de-dah Ruperts like him – that he seems so nostalgic for this vanished old world. Cameron recently vowed to make the forces “front and centre of national life” and “revered” again, in a speech to UK personnel in Afghanistan.

Not that increased prominence is a guarantee of increased reverence, however. A short celebrating national service, They Stand Ready (1955), which dates from a year before the Suez debacle punctured the UK’s global pretensions, recalls the last time that the armed forces really were front and centre of national life.

Once the last national servicemen left the ranks in 1963, army life could then be sold as something glamorous and exciting instead of an onerous black-and-white duty. This is exactly what Ten Feet Tall (1963), a rock’n’roll-soundtracked recruiting film does in glorious Technicolor. It showcases a matinee-idol young Scottish squaddie’s ruddy complexion, perfect white teeth, and the (now ominously) nicotine-stained fingers of the army careers officer.