END_OF_DOCUMENT_TOKEN_TO_BE_REPLACED

I Can. I Will. Be Bluetiful.

James Dean, the lost bisexual love-object of the 1950s, famously denied being homosexual, but explained that he ‘didn’t want to go through life with one hand tied behind his back.’

Probably it’s just because I have a weak spot for Lee Ryan, the cheeky blue-eyed Essex boy who sings in a dreamy falsetto – and I know this makes me deeply unhip – but I rather like Blue’s ‘I Can’, the UK’s entry for next week’s Eurovision Song Contest. I hear in it a kind of metrosexual anthem, about men expressing things and having experiences that they really weren’t supposed to until recently.

Untying that hand – and waving it around a lot in time to the music.

I can untie these hands

Boybands played an important role in the spread of metrosexuality, with Take That most famously evangelising the male desire to be desired in the 1990s, turning a generation on to the charms of pierced nipples, leather harnesses and eager male sex-objectification. It seems none of Take That were, despite the many rumours, gay. But Take That as a band were very gay indeed. Their gay manager took the gay male love of the male body and sold it to millions of teen girls – and boys. All that baby oil helped loosen up ideas about masculinity.

London crooners Blue were in many ways the slightly more boring Noughties successor to the tarty Manc lads. Duncan James famously came out as bisexual a couple of years back, making him one of a very small club of out celeb bisexual males (so small I can’t think of any others off the top of my head).

But it’s not as if the others, especially Lee, are acting particularly hetero in this video for ‘I Can’. At the beginning Lee appears to be shagging Duncan from behind, though never losing eye-contact with the camera of course. And in fact a year ago he admitted/boasted to having had MMF threesomes with Duncan, whom he ‘loves to bits’.

When I first began writing about the subject in 1994 I talked about metrosexuality being the male compliment of female bi-curiousness (then called ‘lesbian chic), but quickly shut up about it when I realised no one wanted to hear that. And while metrosexuality did in some ways culturally stand in for male bi-curiousness – it’s his jeans not his ass I fancy – by encouraging an awareness of male beauty and attractiveness amongst men in general it ended up making the expression of male bisexuality/bi-curiousness much easier. ‘I can’.

Blue recently did a homoerotic, Du Stade type nude shoot for Attitude magazine (with Lee looking by far the most saucy), and have promised another one if they win Eurovision. Those hands have been untied already.

So much so that when the foxy ladies join them at the end of the video, and the heavens open, suggesting perhaps some kind of pan-sexual gang-bang, they don’t really convince as objects of the camera’s gaze – next to the full-wattage metrosexiness of Blue. 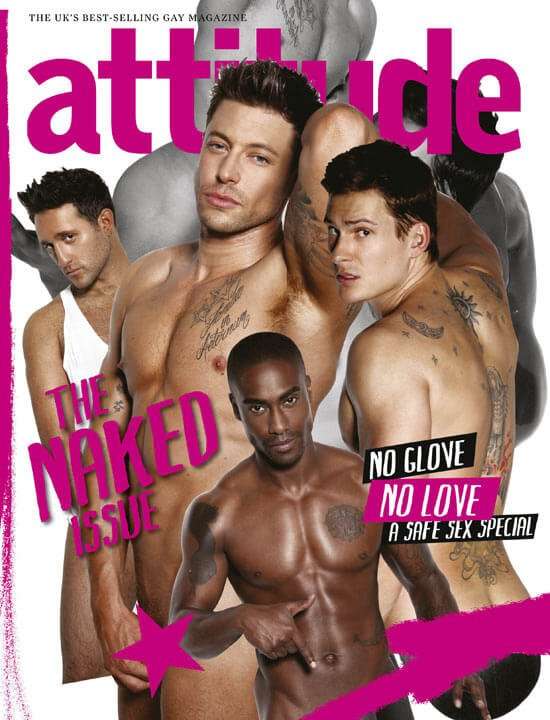 I’m obviously a bit slow this week. It’s only finally dawned on me what’s going on with the lady dancers in the video.

They’re Blue’s ‘feminine side’. All tied up in bondage at the start of the video they end up ‘untied’ and freely mingling/merging moistly with the boys.