The buff chap with the stuck-on beard above was recently kicked out of a football game in Florida for daring to wear as little on the stands as the cheerleaders do on the pitch. Boo! American Speedophobia strikes again!

It wouldn’t happen in Oz, home of the budgie smuggler and anything-but-shy spornographic rugby players.

And where, with the launch of Amazon.co.au, Mark Simpson Kindle titles are now available to download!

An Australian beer company tries the ‘buy our beer and save yourself from metrosexuality’ approach.

I’ve been to Australia and can tell you that the beer in question certainly isn’t going to sell itself on something as gay as, er, tasting nice.

I doubt this approach, however ironic it may be, is going to be very effective.  Several ailing American brands, including Hummer and the Republican Party, tried the reassuringly retrosexual approach a few years back, and look what happened to them.

Traditional beer manufacturers have been hit hard by metrosexuality, especially in Australia which, for all its Crocodile Dundee image abroad, is one of the most metrosexualised countries on the planet.  Australian men no longer just drink ‘beer’ (‘Pint please, mate’ ‘What kind?’ ‘What kind?? Do I look like a pooftah!?’) – and instead actually have tastes and preferences.  Even if they still drink beer – and not many young men do – they have standards.  How lah-dee-dah. Even worse, they no longer spend all their disposable income on ‘beer’, but lots of other consumer products, including of course clothes, gym membership and vanity products.

How times have changed.  I remember UK beer ads from the 70s and 80s which sold beer as the essential and compulsory ingredient of masculinity. Some were fun, but generally there was something slightly depressing about them and the men that appeared in them. The masculinity represented in them was generally as mass produced and industrial as the product, and pretty much all the ads depended on the idea that men needed to be medicated with cheap alcohol to enjoy one another’s company.  And there always, always had to be at least three of them in case we though they might be getting up to any funny business.  ‘Beer’ was boring normality on tap.

That tap is running dry.

Little wonder recent Government figures showed half the population of the UK is giving up on Britain and moving to Australia – while the other half is trying to become Australian by watching Neighbours or Kath and Kim or by wearing shorts and flip flops and drinking lager until they hurl. Even the UK’s version of Big Brother is clearly just a bunch of Brits pretending to be Australians living in a shared house in Willesden.  In this topsy-turvy, antipodean world, The Mother Country now wants nothing more than to be the Lucky Country. Mate.

But not everyone is completely open about their Ozspirations.  Richard Beard’s Manly Pursuits: beating the Australians (Yellow Jersey Press) is clearly about a nice, middle-class sporting Englishman’s quest to stop being English and become Australian – while pretending to research a book about why the Australians are so much better at sports than we are. But he doesn’t say this.  Instead he says he wants find out why the fifty-third most populated country is fourth in the medals table at the Athens Olympics – and always spanking our much more populous country’s puny, pale not-very-sporting bottom with a big, firm, sun-tanned hand.

So he travels to Manly, Australia (so named by Captain Arthur Philips because, Beard explains, of the manliness of the naked aborigines on the shore shouting ‘Go home whingeing Poms!’) and takes on the locals at bowls, shooting, golf, swimming, surfing, running and… pub quiz trivia. He mostly gets thrashed.  Even by pensioners and ladies. In between thrashings, he waxes lyrical about the strength and beauty of the sporting Australian male, compares and contrasts Oz and Brit culture (they’re great; we’re rubbish), and dips into some colonial history (they’re plucky; we’re just guilty). He of course, like most people, isn’t really interested in beating the Australians so much as joining them. Even if he hasn’t quite admitted it to himself.

I have to say that while Mr Beard is a good, thoughtful writer, and his book is certainly more fun than a game of rugby against Australians on steroids, I didn’t find his shameless Oz-worship something to smile about. But then, I’m very peculiar. You see, I don’t believe Australians are ‘better’ than us and certainly don’t want to become one.

Oh yes, I once shared Beard’s – and everyone else’s – enthusiasm for all things Australian. Raised on Skippy, Rolf Harris and swimwear catalogues I too yearned for a country where the sun shone all day everyday, where everyone was your mate, kangaroos could talk and ‘Speedos’ meant ‘Y-fronts’.

And then I visited Australia. And it quickly dawned on me that Australia, like Australian skin, is much better in long-shot. Australia is much more Australian from a distance. Close up, it’s just not really worth 24 hours of recirculated flu viruses, deep-vein thrombosis and Love Actually. It’s been left out in the sun too long.

There is though one thing that Australians are indubitably good at: selling Australia. Perhaps this shouldn’t be so surprising since they run the world’s media. Oh, and, sorry, all the best-looking Australians we’ve seen already – either in their visiting rugby teams, their TV soaps, the Hollywood movies they hog, or in the Escort section at the back of gay mags. Leaving behind those hit with the ugly didgeridoo to mind the Barbie.

OK, so they are actually better at sport. Beard comes up with some reasons why. These are: the weather, booze (if you’re an Australian social club the easiest way to get a license is to organise ‘sporting activities’ – so playing sport in Oz is quite literally a way to get drunk), the weather again, all that meat in the diet, and the German Democratic Republic. Apparently Australia slavishly copied the GDR’s hugely successful centralised approach to Olympic sports in the 1970s. And, I’d like to think, for much the same reason: both were tiny countries that everyone was leaving that desperately needed some good PR.

Oh, and: homosexuality. ‘Sport allows men to stare, in detail, without homosexuality alleged or feared,’ Beard explains. ‘Especially in swimming, where in this all-male club bodies are straining, on their fronts, buttocks up, naked, except for tiny lycra Speedos. It’s surely nothing but coincidence that everyone’s favourite words are “mate” and “fuck”.’

Now, I’ve always wanted to believe that Australian sportsmen and their Speedo-clad butts are gagging for it – or rather me – but now I can cite Beard, someone I presume is happily heterosexual, in case any Oz sportsman dares to disagree.

I though have a crazy hunch that, lycra fetishism aside, the main reason why Australians are better than us at sport is because they don’t hate themselves.

Beard’s oh-so-English self-deprecation, amusing for a while, does end up sounding like self-hatred (though when he really lets rip, as he does at the cringeworthy Mike Atherton for example, he can rise to dazzlingly spiteful poetry). On the perennial Republican campaigns to redesign, i.e. de-Brit, the Australian flag he offers: ‘My own idea is to shrink the Union Jack in the corner of the existing flag by half a centimetre each year. No one will notice, and in twenty years it’ll be gone.’

This seems to be Beard’s and much of today’s English middle-class’ attitude towards their own identity. They hope their embarrassing, awkward, damp, guilt-ridden Englishness will just wither away unnoticed and one day they’ll wake up something innocent, tanned, laid-back and athletic with a swimming pool and actually be able to barbecue meat without sending people to hospital.

Sorry cobbers, it ain’t gonna happen. Australians have got not use for self-hating whingeing poms and their whimsical self-mutilating sense of humour.  They’re too busy telling the world how great it is to be Australian. And conquering it.

Poor Mark Latham, the former leader of the Australian Labour Party, isn’t happy with the state of Australian manhood. Like so many things, it isn’t as good or as big or as satisfying as it used to be. In his new book (curiously titled ’A Conga Line of Suckholes’) he laments:

“One of the saddest things I have seen in my lifetime has been the decline in Australian male culture . . . Australian mates and good blokes have been replaced by nervous wrecks, metrosexual knobs and toss bags.”

I’m not sure who the ‘nervous wrecks’ or the ‘toss bags’ he was referring to are, but when he was talking about ‘metrosexual knobs’ – the phrase that has made headlines around the world – perhaps he had in mind Jamie Brooksby, this year’s Australian Big Brother winner, a young, highly groomed fitness trainer who spent much of his time naked in the bathroom showing the world his assets. 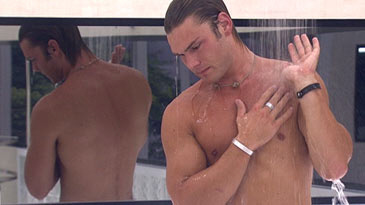 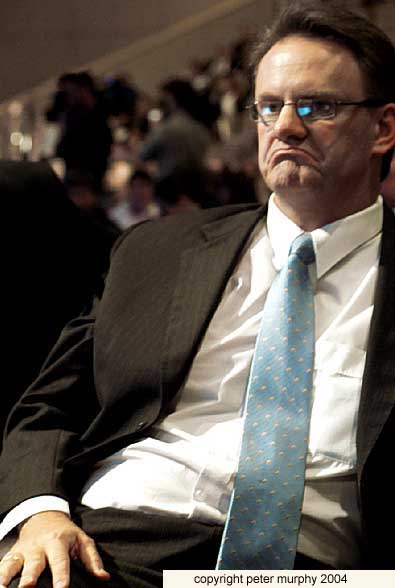 That his remarks have aroused so many column inches in the global press and ‘half-cocked’ discussions about ‘the crisis of masculinity’ can only be down to the rather fond, rather dated fantasy that the rest of the world has about Australia in general and Australian men in particular – that it’s the last frontier of ‘real’ manliness in an enervated Western World. A masculine Eden, full of Crocodile Dundees wrestling their lunch onto the barbie and their Sheilas into bed.

This would also go some way to explaining the ‘outpouring of grief’ (to use the mandatory cliché) over the ’shocking’ death of the outdoor cabaret artist Steve Irwin, whose worldwide popularity seemed to be based in large part on him being sold as the ‘real’ Crocodile Dundee.

That he died was not, I would venture (at the risk of provoking an outpouring of rage), really quite so surprising – his act depended on extreme recklessness. Nonetheless, his death was talked about in astonished, traumatised tones as if it marked the passing away of a certain kind of old-time masculinity rather than just a particular TV personality. It’s as if people couldn’t quite come to terms with how the retrosexual was apparently killed off by Nature herself, with a poison arrow through his heart. 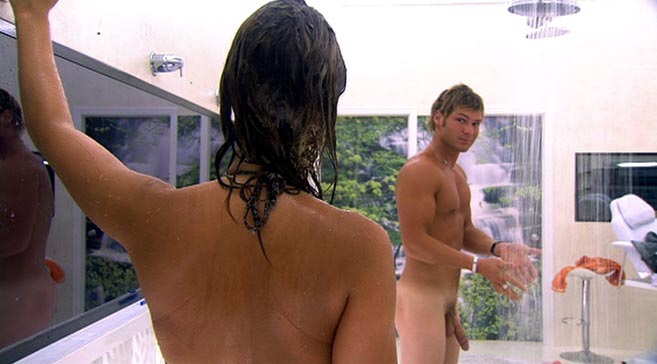 While I’m sure there are plenty of retrosexual Australians left who haven’t been Stingrayed, particularly outside the metropoli, and while I personally can be rather nostalgic about retrosexuals (so long as they don’t look like Latham), Australia long ago made the transition from industrial to service economy, production to consumerism, mining to makeover, and was also the country whose cutting-edge media helped pioneer the process of turning the sporting male body into a commodity – into appetising meat.

Australia is a highly metro country – not least because, like Mark Latham and Steve Irwin – Australia is highly successful at drawing attention to itself. Oz, that scarcely-populated dusty continent in the middle of nowhere has for many years been parading in the bathroom of the global media village with its knob out.

The Australian male is still on the frontier – but it’s now the frontier of consumerism and me-dia. Call me shallow, but if they’re endowed like Brooksby, I doubt many people, apart from whingeing retired male politicos with faces like a smacked Platypus, will seriously complain if they’re more into sack-and-crack waxing than sheep-shearing, ab crunches than Crocodiles.

(Thanks to the website at worst, my best for the ‘grabs’ of Brooksby & Topak  for finding them)