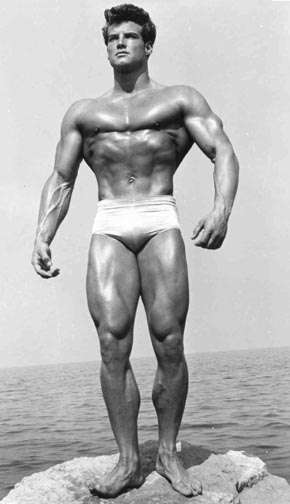 Guys! Do you worry that your body isn’t sufficiently lean and muscular? Do you frequently compare your muscles with other men’s? If you see a man who is clearly more muscular than you, do you think about it and feel envious for some time afterwards?

If you answered ‘yes’ to any of these questions it used to mean that you should send a postal order to Mr Charles Atlas to ask for advice. Nowadays, if the myriad articles about the latest ‘disease’ to afflict men are to believed, it means you might need to see a therapist to talk you out of going to the gym so much because you may be suffering from ‘bigorexia’ – the delusion that you’re not beefy enough.

On the other hand, it might just mean that you go to the movies.

We expect as a matter of course that our male leads these days will have perfect pectorals, bounteous biceps and corrugated steel stomachs that speak of thousands of hours of sweat, tears and neurotic dieting. ‘Brad Pitt’ is now Esperanto for ‘six pack’. What, after all, is the point of being a film star if you can’t hire the most sadistic personal fitness instructor in town and feast on egg white omelettes and rice cakes? More pertinently, why should we puny punters pay good money to gaze up at men on the big screen who aren’t themselves bigger than life, but sport waistlines that speak of no life at all?

It wasn’t always thus. In fact, until the Eighties muscles were usually so few and far between on the screen that the oiled man in swimming trunks bashing the big gong at the beginning of Rank films was as much meat as you were likely to get at the movies. It was of course an oiled Austrian action hero and former Mr Universe who changed all that, banging a gong for bodybuilding in ‘Conan the Barbarian’ (1982) and ‘Terminator’ (1984) introducing us to the spectacular male body and changing forever the way we see the male physique.

True, all those steroid-pumped chests look excessive now, ‘tittersome’ even, and screen muscles have tended to come in a more manageable, more covettable size for some years, but a male Hollywood star who doesn’t work out is as unthinkable now as an American who doesn’t floss.

And Arnie, like the cyborg he played in his most famous movie – or a personal fitness trainer from hell – keeps coming back. He refuses to acknowledge that he’s mortal, or, which is much more hubristic, out of fashion. Next week sees the opening of his new action-hero movie ‘Collateral Damage’, in which he plays a fireman seeking to avenge the murder of his wife and son by terrorists. Next month he begins filming ‘Terminator 3’, quickly followed by ‘Total Recall 2’ and ‘True Lies 2’ Single-handedly, and Promethian-like, fifty-five year-old Arnie, who had major heart surgery five years ago, seems to be trying to haul the Eighties back. (Not least because his political ambitions seem to promise ‘Reagan 2’.)

Meanwhile, his former arch-rival and Sylvester Stallone is currently trying to get funding for yet more sequels to his Rocky and Rambo films (6 and 4, respectively if you’re still counting). Also fifty-five years old, Sly hasn’t had a hit movie for a decade. Post September 11th he hopes America is ready again for a muscle-bound, if slightly wrinkly hero and that Hollywood will buy the idea of Rambo parachuting into Afghanistan in a thong and putting the fear of god into Bin Laden and Al Quaeda. So far his attempts to get funding have been unsuccessful, but if the Austrian Asshole succeeds in making a comeback from the knackers yard, who will be able to stop the Italian Stallion?

Of course, Arnie and Sly weren’t the first musclemen to make it in movies – just the first to succeed in making it really ‘big’ business.

Back in the 1930s there was Johnny Weissmuller, Olympic swimmer turned jungle vine swinger in a loincloth. His muscular tartiness in the Tarzan movies was made acceptable by the fact that his physique was practical in origin (swimming, vine climbing and wrestling alligators). He was also an ‘ape-man’. As a (white) noble savage, who hardly spoke except to ululate loud enough to make the tree tops quiver, or shout ‘Ungawa!’ at a startled passing elephant or chimpanzee, he was spared many of the enforced decencies of 1930s Western civilisation. Interestingly, like Arnie he was originally Austrian: ‘Weissmuller’ is German for ‘white miller’; while ‘Schwarzenegger’ means ‘black plough’. Modern bodybuilding owes everything to Aryan farming.

By the 1940s and 50s Sword and Sandal epics, the pre-cursor of the action movie, starring people like Kirk Douglas, Tony Curtis, and B-movie body-builder-turned-actor Steve Reeves legitimised the display of more naked, shapely male flesh (hence the line in ‘Airplane’ when the pervey pilot asks the lad being shown the flight-deck: ‘Son, do you like watching gladiator movies?’). Russell Crowe of course was to revive this genre in 2000 in ‘Gladiator’ and went out of his way in interviews to claim that his brawny physique had been formed not in the gym but in ‘practising sword fights’ – in a leather skirt. (Some cynics might say that he failed to gain the Oscar for ‘A Beautiful Mind’ because by then he seemed to have lost his beautiful body).

In the Fifties and Sixties, Rock Hudson, epitomised the ‘All-American’ clean-cut hunk. A Tarzan of the suburbs, if you will. He had a body, but was not sexual. His masculinity was pleasingly superficial and unthreatening. (And now we know that there was never any chance that he might do Doris Day at all).

But it was that other fifties phenomenon Marlon Brando who inaugurated a new era – the male as brazen sex object. His tight-T-shirted, sweaty muscularity was openly erotic; his brutish, built but sensual Stanley Kowalski was the streetcar named Desire (‘Stell-la!’). Clift and Dean were faces, but Marlon was a face on a pouting body. There was something androgyne yet virile about the Wild One’s most physical roles. Perhaps as a kind of revenge on the industry, Marlon famously developed an eating disorder (something usually associated with women) and later became notorious for his ‘work outs’ with gallon tubs of ice cream. In an odd way, Brando’s weight-problem is a kind of ‘bigorexia’, and probably even harder work than staying trim in the way that, say, Clint Eastwood has (and having sex in ‘In the Line of Fire’ with his tight white T-shirt at 70).

In the Fifties-come-around-again Eighties, Tom ‘Risky Business’ Cruise somehow managed combine Brando’s erotic narcissism with Hudson’s clean-cut sterility, this time in a pair of Y-fronts. Later, in ‘Taps’ he played an intense right-wing recruit with an obsessive interest in bodybuilding and showering. In ‘Top Gun’, the definitive Eighties movie, he legitimised the new male narcissism as something patriotic and Reaganite. Most of Tom’s oeuvre since then has stuck to the same theme of boyish vulnerability mixed with determination; passivity and masculinity; sensuality and respectability – and the identity problems that this creates (e.g. ‘Eyes Wide Shut’ and ‘Vanilla Sky’). By the same token, his muscles, with the exception of those seen in ‘Taps’ – and his preposterous forearms in ‘Mission Impossible’ – have never been huge, but they have always been very definitely there if needed. Or desired.

The Eighties ‘roided’ bodybuilder action heroes such as Arnie, Sly, Mel, Bruce ‘Die-Hard’ Willis (who for most of the Eighties seemed to be wearing Brando’s unwashed vest from ‘Streetcar’) and the ‘Muscles From Brussels’, Jean Claude Van Damme were less happy to be sex objects. True, these were film stars whose claim to fame rested largely on their willingness to display their bodies, but there was also slightly desperate disavowal of any passivity – hence the emphasis on being action heroes. Arnie and Sly were offering their spectacular bodies for our excitement. Like the explosions and the stunts, their bodies were special effects – in a pre CGI era they were perhaps the most important special effects of all.

Since then the mainstreaming of bodybuilding, the increasing sophistication of CGI and the reconciliation of a new generation of young men to their ornamental role has left their Eighties action heroes’ antics looking rather embarrassing. Today’s male stars work out, but the compensation of hysterically massive musculature, hard-on vascularity and single-handedly wiping out entire armies isn’t needed. Aesthetics have become more important than arm-aments. Arnie may have succeeded in getting Hollywood down the gym, but it is (early) Marlon and Tom who have inherited the World. Keanu Reeves, Ben Affleck, Matt Damon, Ethan Hawke, and all those close-ups on hunky-but-pretty Josh Hartnett’s long-lashed Nordic eyes in the war movies ‘Pearl Harbor’ (2001) and ‘Black Hawk Down’ (2002) prove this. Even Will Smith in ‘Ali’ (2002) doesn’t really look terribly heavyweight.

And former WWF wrestler Dwayne Douglas Johnson ‘The Rock’ who made his debut in ‘The Mummy Returns’ may be hailed by Vanity Fair as ‘the next Segal, Stallone and Schwarzenegger rolled into one’ (a queasy image), but seems extravagantly ornamental, with his plucked eyebrows, lip gloss, make-up and decorative tattoos.

However, that’s not to say that the new relationship to the male body is any less pathological. When for example we see Brad smoking or eating a hamburger in ‘Ocean’s Eleven’, we can’t help but wonder how much it cost in CGI. (Reportedly he and his wife don’t keep any food in the house and have all their meals calorie counted and delivered to their door). It’s difficult to imagine any of today’s generation of male stars finding anything they’d actually swallow – and keep down – on the menu at Planet Hollywood.

Meanwhile Arnie and Co., the ‘bigoxeric’ heroes of yesteryear’s big screen, seem unlikely to bring back the outsized Eighties not just because no one really needs them or can find a use for them, but because they are looking their age – older actually, in Hollywood terms. The steroids Arnie began using at the age of 14 to produce those ‘special effects’ can hasten the ageing process and may well have contributed to other ‘collateral damage’, such as his heart problems (they have also become mainstream – 7% of High School boys in the US admitted to taking them). Having been convinced by Arnie to put so much faith in working out and getting beefy, the world does not want to be reminded that it can’t keep you young forever and in fact can have the opposite effect.

Yes, in ‘Collateral Damage’ Arnie’s Panzer body is still there, trundling around beneath his pill-box head, but it is faintly embarrassing now – so much so that everyone in the movie pretends not to notice it. He plays a fireman, which is nice and useful and human-scale. But we know, post September 11, that most American firemen, beefy and worked-out as many of them are, do not look like ageing male masseurs. As one of the characters complains, almost surreally, when Arnie turns up unexpectedly: ‘You order cheese pizza and you get German sausage’.