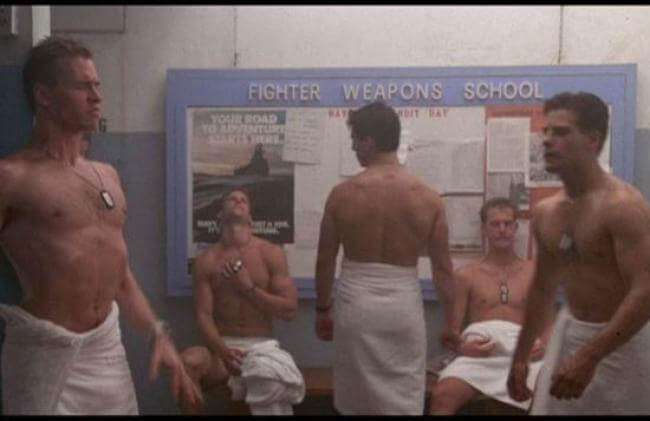 Top Gun Turns Thirty – How Did It Get So Gay?

(Originally published in the Daily Telegraph May 12, 2016)

30-years ago today, the stars of Top Gun were taxiing  the red carpet at the premiere in New York. The film, which features Tom Cruise’s ‘Maverick’ and Val Kilmer’s ‘Iceman’ wrestling in the air for Alpha male supremacy, was about to ‘go ballistic’ and smash multiple box office records. In doing so, the Tony Scott piloted blockbuster would make A-listers out of its two preening male stars, and become perhaps the definitive 80s film.

But it has also become a shared joke these days. The subject of Saturday Night Live skits and a host of YouTube parodies.

Though it really doesn’t need much parodying. Or editing. There’s a plot which sees Tom Cruise as ‘Maverick’ and Val Kilmer as ‘Iceman’ wrestling in the air for ‘top’ – with Kelly McGillis trying, vainly, to come between them.

And that ‘ambiguous’ dialogue: ‘Giving me a hard-on!’ whispers one flyboy to another, watching videos of dogfights. ‘Don’t tease me!’ replies his buddy. ‘I want butts! Give me butts!’ shouts an angry air traffic control officer. And the final reel consummation between Iceman and Maverick on the deck of an aircraft carrier in the Indian Ocean, cheered on by the entire crew, after all that playing hard to get: ‘You can be my wingman any time!’ ‘Bullshit, you can be mine!’

And of course, the immortal volleyball scene, in which oiled guys in jean-shorts and shades flex and strut and jump to the sounds of ‘Playing with the Boys’.

All this plus Tom Cruise at his prettiest and poutiest, in leathers and on a motorbike. When not in his underwear.

So it’s difficult to believe it now, but when Top Gun was released in 1986, the vast majority of the people who flocked to see it did not think it ‘gay’. At all. They would likely have dropped their popcorn at the suggestion – and the movie wouldn’t have taken $177M internationally, making it one of the most successful movies of the decade. Instead Top Gun was seen as the story of airborne, aspirational male heterosexual virility. Nice-looking, worked-out male heterosexual virility.

Even nearly a decade on in 1994 when I wrote about the outrageous homoerotics of Top Gun in my book Male Impersonators, plenty of people still weren’t prepared to have Top Gun’s heterosexuality impugned. Later the same year the director Quentin Tarantino made a controversial cameo appearance in the movie ‘Sleep With Me’, arguing that Top Gun was about a gay man struggling with his homosexuality.

The journalist Toby Young, a Tarantino fanboy, was moved to write an essay in the Sunday Times defending his favourite movie’s heterosexuality from Simpson and Tarantino’s filthy calumnies. As I recall, his ‘clinching’ argument was that Top Gun couldn’t be a gay movie because he’d watched it twenty times – and he’s straight.

And in a queer way, he was right. Top Gun isn’t of course a gay movie. But it’s flagrantly not a very straight one either. Whatever the intentions of its makers, it’s basically ‘bi’ on afterburners. And this seems to be widely accepted now.

So how did attitudes towards Top Gun change so much? How did it’s virile heterosexuality so spectacularly ‘crash and burn’?

Well, partly because everyone is so much more knowing these days, or at least keen to seen to be. And we have tell-tale YouTube to collect all those ‘incriminating’ clips. It’s why we talk about ‘bromance’ now – instead of ‘innocent’ buddy movies. And partly it’s because Top Gun has come to be seen as the quintessential 80s movie – and the 80s are now seen as culturally ‘gay’. Or camp.

For instance, despite his apparently entirely heterosexual personal life, Simon Cowell is seen as screamingly ‘gay’ – culturally. And his whole personal style, the hair, the white t-shirts, the leather jackets, the Ray Bans is Top Gun. (Even his business model is Top Gun – the karaoke, and the struggle to ‘be the best’.)

The late Tony Scott, like his older brother Ridley, had learned his craft in the UK ad business – and their father was a career soldier. Hence the glamorous, fetishizing presentation of the young men in the movie, alongside the more traditional homoerotic-homosocial banter that we now find so hilarious. Those infamous locker-room scenes were the Launderette ad all over again – only gayer.

What TG succeeded in doing was making the then new, consumerist, non-traditional male vanity of the 1980s look traditional and patriotic – and the military an attractive, sexy proposition for a new generation of young men with different expectations to their fathers’. Hence the loan to the film-makers by the USN of the USS Enterprise. (Reportedly USN recruiting went through the roof after the film’s release.)

After all, some years earlier the USN had loaned The Village People a destroyer to record the promo of their single ‘In The Navy’. Back then, most people who bought their records didn’t think The Village People were gay either. They just thought them fun archetypes of hetero American machismo.

How Eighties Advertising Made Everyone Gay 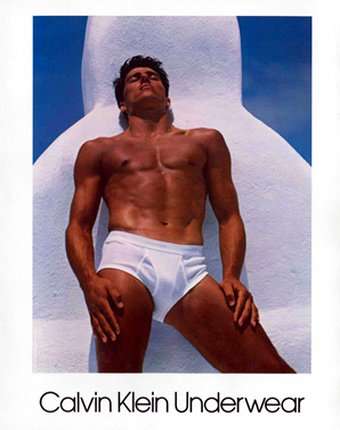 Why, I wonder, are gays -- or at least the busybody, button-holing, milk-monitor types -- so keen on ads being nice to them and telling the world it’s OK to be homo? Especially when this strategy frequently leaves them with mayo on their faces?

Stonewall’s apoplexy over the pulling of the Heinz ‘gay kiss’ ad earlier this year is a messy case-in-point. Excuse me, but it wasn’t a gay kiss, it was a joke: Heinz’s sandwich spread is so good, it turns mum into an ugly New York deli short-order chef whom dad pecks on the cheek before leaving in the morning. They’re not a gay couple. The fact it wasn’t a very good joke doesn’t make the sulky gay boycott of Heinz for pulling the ad look any less humourless than the literalist Christians and ‘family-values’ freaks who complained about it in the first place.

Likewise, whatever Snickers were saying in that TV ad featuring Mr T barking, “Get some nuts!” while firing candybars at a swishy speed-walker, the much swishier response of gay groups on both sides of the Atlantic who succeeded in getting it banned sent out the entirely unambiguous message that gays don’t have any.

More to the point, who besides Stonewall and pensioners, actually watches TV ads these days? Isn’t that what the fast-forward button was invented for? Gay people, and for that matter most straights, are too busy uploading their ‘home movies’ onto their on-line profile to watch TV in real time.

‘Impressionable’ kids that the gay busybodies want to protect certainly aren’t watching: they don’t see the point of TV that doesn’t turn the world into a lake of fire at the touch of an Xbox controller.

I’ll bet ready money most people only heard about these ads after the gay milk monitors started huffing, “How very dare you!” -- and driving even more traffic to YouTube. It was the only place I actually saw either ad.

Gay protests about ‘homophobic’ ads today sometimes seem to exist in a virtual world, defending virtual people from virtual slights where the only thing that’s real is pointlessness. I’m old enough to remember when people did watch ads. It was a time when they were, as everyone used to say repeatedly, “the best thing on telly,” when, instead of diving for the mute button, people would turn the sound up.

And it was a time when ads were doing their damndest to turn everyone gay. It was called the 1980s.

The legendary UK Levi’s male striptease ads of the mid-1980s (inspired by the success of the 1983 Calvin Klein underwear poster campaign featuring a giant Tom Hintnaus stripped down to his Y fronts in Times Square) in which humpy young men took their clothes off in our living rooms -- and introduced the existence of the worked-out, attention-hungry, proudly passive male body to an equally astonished and enraptured British public -- not only brainwashed an entire generation of straight boys into joining the gym and then going to gay discos and starting boybands to show off the results.

It also succeeded in making even straight women gay. After all, in place of cooing about “twinkly eyes,” it taught women to look at the male body with the same critical, impossibly demanding, carnivorous eye that gay men had used for years. (And in fact, so much have all our expectations been inflated that Nick Kamen’s ‘fabulously hunky’ body as it was described back then by the tabs, today probably wouldn’t get past the audition stage -- he’d be told to go back to the gym and inject some horse steroids.)

Pre-1980s there wasn’t much gay lust in ads or, for that matter, Britain. I remember as a kid spending most of the 1970s watching an Old Spice Aftershave ‘Mark of a Man’ commercial, which featured a surfer riding a vast, spuming wave in very long-shot, to the climactic strains of ‘O Fortuna’ from Carl Orff’s Carmina Burana. The number of times I waited for that ad to come on as a kid, hoping, praying that this time the camera would move in closer.

In the 1980s, my prayers were answered and the lens moved in, big time. Since then, it’s never moved back. It has zoomed ever closer, until now we’re looking at the mitochondria on the walls of men’s small intestines.

Maybe I’m an incurable romantic/masochist, but I sometimes find myself missing the aching, blurry, long-shot tease of 1970s’ Old Spice masculinity. Because it never quite delivers, it never disappoints.

Old Spice after shave man on a surfboard

You might think my take on how 1980s advertising queered up Britain and made it safe for metrosexuality fanciful, but there were lots of people who objected to the Levi’s commercials back then because they saw them as promoting sodomitic immorality. If those nay-gay-sayers had succeeded in having the ads pulled -- in the way that gay groups succeed today with ads they deem to be immoral -- who knows what kind of pec-less, ab-less world we might be living in?

One of the more interesting contributions is a series of ads for the trainers ASICS, which ran in France this year. In them, two male French comedians, Omar & Fred, one black, one white, ‘go gay’, making passes at one another. Sans ASICS, they’re rebuffed indignantly by the other party. Avec, they go gaga for them. There’s nothing especially offensive about the ads. They resort to fewer stereotypes than gay-adored Little Britain and, more importantly, are (mildly) funny and seem to be entirely accurate in what they’re saying about the effect that consumerism in general -- and advertising in particular -- have had on men.

How does it score according to Commercial Closet’s gay-friendly grading system? ‘40: Negative’.