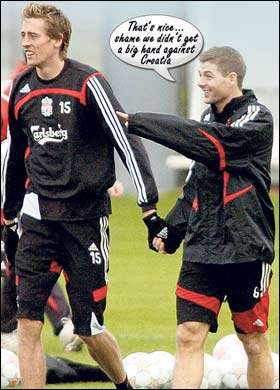 In an age of broadband hardcore it’s rather sweet to discover that men are still so easily aroused. At least, that is, football fans and tabloid journalists.

A little innocent hand-holding by Liverpool FC during a team-building training session before their crucial Champions League match with Porto worked the Sun into a frenzy this week. ‘Koppin’ Off’ screamed The Sun headline, next to a picture of Peter Crouch and Steven Gerrard chastely holding hands, with the subtitle ‘So this is what they mean by “training camp”??’

Those logging on with moistening palms to The Sun’s website were treated to a ‘slide show’ of other members of Liverpool FC holding hands with mood-enhancing captions like ‘Chase me, chase me!’ and ‘Ere, is that the fairy across the Mersey?’.

In fact, The Sun was so excited by this non-story it returned to it yesterday, wheeling in early 90s Liverpool ‘hardman’ footballer Neil ‘Razor’ Ruddock to stick it to the nancy boys, by-lining a piece headlined, ‘What’s next… make-up and pink strips?’

At first Ruddock dutifully tries to play the ‘hardman’ role the Sun has cast him in: ‘It certainly wouldn’t have happened in my day, he says. ‘I’d have found it too embarrassing and a bit girly.’

But then he begins to lose the plot: ‘The only time we would have held hands with another player is on the way back from the pub after a few drinks.’

No, no, NO! You’re really letting the side down now, hardman! Where’s your… rigidity? The whole point of getting so pissed with the lads is so that you don’t remember what you did on the way home and certainly don’t write about it in a national newspaper.

But Neil can’t help himself: ‘In our day, we did all our team-building in the pub. When a new player joined it was straight down the pub for a few bevies… It did the trick and the new lads soon bedded in.’

Bedded in?? Was that before or after holding your hand on the way back from the pub?

Neil tries to get back ‘on message’, but then he’s off again, giving us far too much information: ‘But it’s no longer a hardman’s game. John Terry and Frank Lampard now shave their body hair off…. It’s a Continental thing… When I was at West Ham Paulo Di Canio shaved off all his hair apart from the stuff on his head.’

I’m sure if you asked them nicely and made it clear how much you preferred your footballers furry they’d let their body hair grow for the ‘Razor’.

He goes on: ‘Players use sunbeds and wax their chests and under-arm hair. What’s next? Make-up? Pink strips?’.

Get up to speed mate. The Sun already told us a few months back that Manchester United have had to rebuild their players’ changing rooms to make their lockers big enough to ‘accommodate their manbags’ filled with ‘more cosmetics than their WAGS’.

Then, finally, he confesses: ‘Mind you, if I was offered £120,000 a week like some of the top stars are on now I would hold Peter Crouch’s hand – or anyone else’s for that matter.’

Yes, which reminds me Neil, how much were you paid to be Pete Burn’s bitch on Wife Swap?

Maybe it’s the fear of another tongue-lashing from hardman Pete Burns that’s responsible for Ruddock’s endearing failure to deliver the queerbashing goods here and go a bit… limp. Compared the Sun’s first report, and, sadly, too many football fans, he seems to go out of his way not to chastise the Liverpool players for their ‘poovery’ – and talks instead rather mildly about how holding hands is ‘a bit girly’. (At least, that is, when you’re sober.)

Or perhaps he was worried someone might find some pics of those dirty great big sloppy snogs he and the lads used to give one another after every goal back in the good old manly days of soccer. Followed, frequently, by what looked very much like a team gang-bang on the ground.

Today’s metrosexual young footballers – perhaps because they look so ‘gay’ – are vestal virgins with one another by comparison. They practically shake hands and exchange business cards.

On the other hand, perhaps they don’t snog each other wildly after a goal these days because unlike Ruddock’s retrosexual generation, they don’t need that special excuse – or have to be dosed with gallons of beer down the pub – to actually show affection towards other men. Many of them probably kiss one another when meeting and bidding farewell, like Becks – ‘It’s a Continental thing’. This after all is a generation of straight lads who send text messages to other lads peppered with kisses at the end. And to be honest, this old pooftah finds that a bit girly himself.

It seems though that holding hands sober, whatever the Sun or Ruddock think of it, worked a treat. Liverpool won the game against Porto 4-1.