These ‘jokey’ Veet ‘Don’t risk dudeness’ ads in which a ‘sexy lady’ turns into an ‘unsexy dude’ because she hasn’t used the smelly depilatory cream have provoked an e-flurry of outrage for their sexism and shaming of women who aren’t always smooth, so much so that Veet had to issue an apology and withdraw them.

But what’s truly ‘funny’ about these ads is that in some ways they strike me as actually being the advertising world’s version of those ‘gender flip’ click-bait posts that many of the people lambasting the Veet ads profess to love. You know, the ones that pretend that men are never objectified – despite male (self) objectification being hard to miss these days unless you’re trying really, really hard not to notice flagrant, flaming evidence like this. And this.

Instead of looking around us, we’re supposed to listen to blather like this:

“For some reason, as soon as you put a man in there … it’s an entirely different thing that we aren’t used to seeing.”

Only if you’ve been jamming your eyes shut for the last twenty years, dear.

So, having pretended that male objectification doesn’t exist, it’s now ‘really radical’ and ‘challenging’ to ‘flip’ the roles. But in an ironic and unconvincing way, usually making sure that the men adopting the faux ‘sexualised’ poses are unattractive. (And not wetting their vests.) 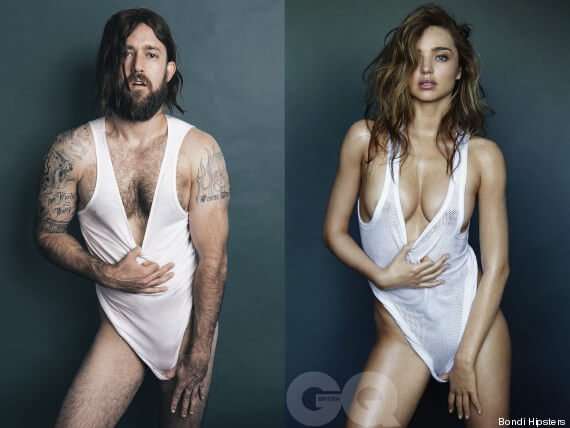 The ‘anti-sexism’ of many of those ‘gender flip’ memes strikes me as completely bogus, implicitly depending as it does on the entirely (hetero)sexist presumption that sexiness is a female quality/property. The ‘ludicrousness’ of the man adopting ‘sexy’ poses requires a worldview that insists men just aren’t meant to be objectified. That simply doesn’t see male objectification because it’s not supposed to happen.

So the ‘gender flip’ actually tends to reinforce the very thing it hypocritically pretends to undermine.

Worse, people pretend, over and over again, to be impressed by daggy male hipsters pretending to do sexy while pretending to subvert sexism – as a way of getting attention. Which is the only really sincere part of the whole charade.

Instead of ditching the dreary fucking irony and just doing this. Or this.

By contrast, these crass Veet ads are at least refreshingly honest and out of the closet in their horrendous heterosexist revulsion at ‘dudeness’, and the ludicrousness of male sexiness. And of course the thing that is always hovering behind that revulsion, particularly in the US: that dudes might get it on with other dudes.

In stubbly fact, this obsession ends up swallowing their whole campaign, no gag reflex, to the point where it has little or nothing to do with women at all – despite them being the target market.

It ends up being about two dudes in bed.