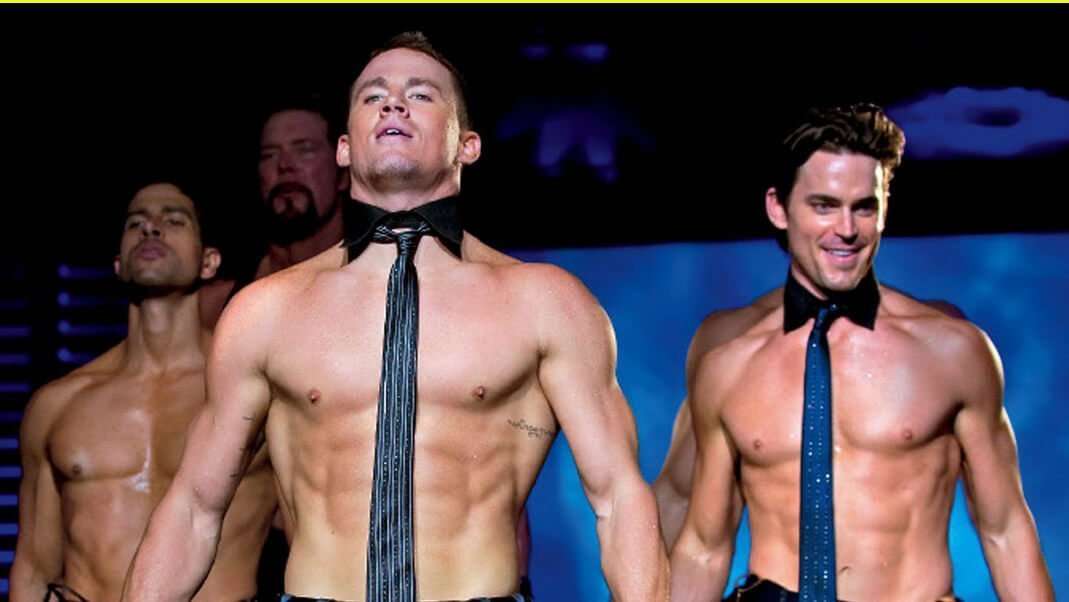 Does Magic Mike Have Anything To Stick Himself With?

This animated gif will save you £8 and 109 minutes of disappointment.

Yes, I’ve done my invert duty and been to see Magic Mike. Which, according to The New York Times, gay men are ‘flocking’ to see in numbers not seen since Brokeback Mountain.

Even if they’re not all as jaded as me I think they’re going to be very disappointed. And not because in Magic Mike gay or bisexual men don’t exist, even as a famously generously tipping audience for male stripping – except as a punchline. In one ‘hilarious’ scene Alex Pettyfer’s uptight sister thinks for a hairy moment he might be gay because he’s shaving his legs. Phew! He’s not gay. He’s a male stripper!

No the betrayal is much, much worse than any of that. And judging by how quickly the mostly female audience in my cinema auditorium stopped giggling and having fun it’s not just The Gays who are going to feel betrayed.

Magic Mike just doesn’t deliver the goods. The junk stays in the trunks. It’s a 110 minute prick-tease without any pricks and very little tease. Most unforgivably of all, this male stripper movie – starring Channing Tatum – wants to be taken seriously. It thinks it has a plot.

And the plot is… another fucking Hollywood morality tale. Will Tatum manage to escape the sleazy, druggy, boys-together world of male stripping and Alex Pettyfer’s winsome grin and end up with his judgey, bossy sister, Cody Horn?

Especially since there’s not nearly enough sleaze on display. I can’t remember the last time I was so bored. Oh, yes, I remember now. Watching Brokeback Mountain.

Fatally, this stripper movie has no sense of timing. Not just in the literally pointless strip routines. Magic Mike suffers from perhaps the worst case of premature ejaculation in cinema history. Two minutes into the film you get the money shot – two seconds of Tatum’s smooth bubble-butt in all its firm, bouncy glory heading for his en-suite in digital Panavision. Which is very nice.

Except you’ve got another 108 minutes to go. Another 108 minutes in which as far as I can remember you never see Tatum’s ass properly again. In this movie about male stripping and the commodification of the male body. Given that you can see Tatum’s bouncy ass scene for free in a trailer for the movie it’s the con of Captain America all over again – but even more of rip off. The wrong kind of rip off.

It goes without saying that you never even glimpse his cock. Floppy or otherwise. Or even a dangly bollock. It is, after all, Hollywood, and while Tatum may have worked as a male stripper in the past and worked that past to get where he is, he is now a Proper Hollywood Star and Proper Hollywood Stars don’t show you their cocks. Because that would be low class. Especially in a move about male stripping.

And apart from a glimpse of a couple of silhouettes of clearly prosthetic penises you don’t see anyone else’s cock, either, floppy or otherwise. Magic Mike is essentially a movie about cockless male strippers. Male stripping with no stripping. Which could have been interesting in an avant-garde, sadistic sort of way. But of course, it’s really not that sort of movie.

Maybe I underestimate the director Steven Soderbergh. Maybe he decided to ruin his career by deliberately making a crowd-pleasing summer movie that didn’t please anyone.

A more likely explanation however is that Soderbergh was frantically trying not to scare straight male punters. And safely sublimated homoerotic sub-plots aside, he does work overtime in this movie to reassure that the male strippers are all a) straight and b) dudes. But if he was pandering to straight men he failed there too. Straight men search online for pictures of (big) dick as much as they do for pussy. They are going to be at least as disappointed as everyone else. Except maybe lesbians.

What’s going on here is yet another instance of the puritannical American Phalliban at work. Protecting the sanctity and power of the phallus by making sure the cock is never shown in public. After all, no matter how freakish, the cock never lives up to the promise of the phallus. Even if Magic Mike had the balls to show us… balls it would still have been something of an anti-climax. As I put it in Male Impersonators back in 1994 (which, let’s face it, is really the era when Magic Mike is set):

‘The myth of male strip­ping mes­merises pre­cisely because it con­tra­dicts itself with every dis­carded item… No mat­ter how freak­ish his gen­i­tal attrib­utes, no mat­ter how craftily engorged and arranged with rings and elas­tic bands, no mat­ter how fran­ti­cally it is waved and wag­gled, the stripper’s penis, once naked, never lives up to the promise of the phal­lus: the cli­mac­tic finale of the strip is… an anti-climax.’

Femininity is traditionally seen and represented in Hollywood movies as ‘masquerade’. The clothes, the hair, the breasts, the heels, the make-up all stand in for the ‘missing’ phallus. Masculinity meanwhile is meant to just be there. Because men have the phallus. Women appear. Men act. Or so the traditional reasoning went.

But Magic Mike, because it’s a cockless movie about male stripping, is, inadvertently, a good if boring example of masculinity as masquerade. With thongs and leather and cop uniforms and oiled tanned pecs and really bad, unsexy dance routines standing in for the phallus. A kind of male Showgirls, without the camp or the fun. Or the ‘show’. There’s a scene where Tatum is dancing dressed in a thong, a SWAT cap and black webbing ammunition pouches over his torso. It looks like a butch basque.

Perhaps because it can’t show us dick, and because it’s trying to reassure an imagined straight male punter, Magic Mike does though keep ramming down our throats that the men have cocks and women don’t – and is mostly unable to negotiate women’s active, assertive sexuality, something that of course the commodification of cocks so characteristic of today’s culture is based on.

By way of a pep talk Matthew McConaughey, who plays (with real relish) the owner of the male strip club, likes to ask his male dancers: “Who’s got the cock? You do. They don’t.”

Or as Tatum, dressed as a cop in the now famous opening scene of the main trailer says to a nervous sorority girl he’s about to frisk:

Mike: You don’t have anything sharp on you that I can stick myself with, do you?
Kim: No.
Mike: Good. ‘Cause I do!
[rips off pants, women scream]

But does he? After all, we only have his word for it. And anyway, those words are highly unreliable. Don’t his words actually tell a different story to the one the movie is telling us? Don’t they say either:

b) Stand back ladies and watch me use my night stick on myself!

Sadly, he doesn’t do either, of course. That’s an entirely different and much more watchable movie. One that I suspect we might have been able to see if Channing Tatum hadn’t had the misfortune to become a Hollywood star, and instead of being condemned to theatrical releases on the big screen had graduated from stripping in South Florida clubs to live shows on our PC screens.