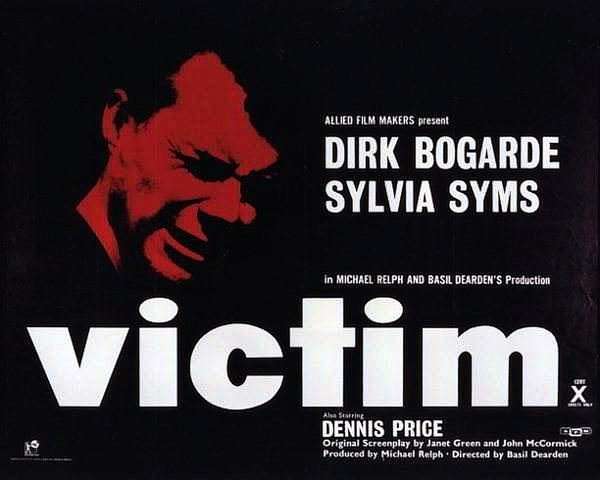 From tortured lawyers, drag queens and cowboys to Mickey Rourke — on the Fiftieth anniversary of Victim the film that started it all, a concise history of the birth, boom, and bust of the big gay movie by Mark Simpson

A tortured, be-quiffed Dirk Bogarde, backed into a corner by his wife’s questioning, shouts: “I STOPPED SEEING HIM BECAUSE I WANTED HIM! DO YOU UNDERSTAND??”

The up-and-coming barrister played by Bogarde in the 1961 classic Victim is coming out. In case the audience hasn’t understood, his wife, played by a young, pretty and very English Sylvia Syms rams the point home to the audience, screaming: “YOU WERE ATTRACTED TO THAT BOY LIKE A MAN IS TO A GIRL!” Strong stuff, for its time.

This was no ordinary coming out. This was, in fact, the debut of the Big Gay Movie: a form that was to flourish for the next half-century but seems to have peaked with the commercial and critical success of Brokeback Mountain and Milk in the noughties. Fifty years after Bogarde (who was impeccably discreet about his own sexuality) became the first man to out himself on the big screen, the gay-themed mainstream movie feels distinctly past its prime.

The first English-language movie to use the word “homosexual,” Victim caused a scandal in the United Kingdom and was banned in the United States. A plea for sympathy and tolerance and also pity for the victims of “nature’s cruel trick,” it was intended to change attitudes and the law: Any sexual contact between males was illegal in the U.K. at the time. Six years later, in 1967, homosexuality was decriminalized — and Victim was credited with helping bring that about.

It also became the gay movie template for decades to come. That template typically consists of four melodramatic parts: the closet, coming out, homophobia, and… uplift! And like Victim, gay movies also tended to display a slightly condescending yen to educate the ignorant masses out of their prejudices, while simultaneously catering to their curiosity and voyeurism about this curious new species, The Homosexual.

By the end of the ’60s, America had begun to get over its shock at hearing the word “homosexual” and along came The Boys in the Band, the U.S.’s first Big Gay Movie, one that invoked the H-word repeatedly — as a condition one had to reluctantly accept. “You will always be homosexual…. Always, Michael. Always. Until the day you die.” Like Victim, The Boys in the Band elicited sympathy and pity for homos, not least for the impressive amount of self-loathing they display. As one of the “”boys” says toward the end of a nightmare party that isn’t very gay at all: “If only we could stop hating ourselves so much.”

But the movie was already seriously dated by the time it made it to the screen — the Stonewall riots had exploded the year before, and the homos were no longer crying into their martinis. Instead, they were throwing Molotov cocktails and shouting about “gay pride.” Gay activists had overturned the notion of the gay passivist.

By contrast, five years later The Rocky Horror Picture Show (1975) was entirely of the moment — and timeless. Still strutting it’s fishnetted stuff to this day, the longest-running theatrical release in movie history is the least dated, most relevant gay movie ever made — perhaps because it’s not really gay at all. There is no plea for sympathy or tolerance, no condescension, no moral uplift. Not even gay politics or pride. It’s just a really fucking great party to which everyone is invited. Even Brad and Janet. It’s pansexual science fiction that predicts a postsexual future in which queerness would no longer be an issue — because everyone was going to be a little bit Frankenfurter.

Cruising, released in 1980 and picketed by angry gay activists at the time for its “homophobia,” also proved prophetic, but nightmarishly so. Al Pacino plays a straight New York cop assigned to investigate a series of murders of gay men by joining the city’s gay leather S&M scene — but finds himself, like the 1970s itself, strangely drawn to the gay world. But the gay serial killer stalking the streets of New York City turned out, of course, to be HIV. The “gay plague” of the 1980s and the right-wing moralistic backlash on both sides of the Atlantic stopped the sexual revolution in its tracks and firmly quarantined gay from straight.

In this climate of fear and hatred, Maurice (1987), ostensibly an adaptation of the E. M. Forster novel of the same name, seemed almost like a rerun of Victim—but this time with some actual sex thrown in. James Wilby, struggling fetchingly with Edwardian repression, is told solemnly by a sympathetic confidante: “England has always been disinclined to accept human nature.”

Tom Hanks’s dying, closeted gay lawyer in 1993’s Philadelphia, released just before combination therapy galloped to the rescue, is a grim gay melodrama that won him an Oscar. But it wasn’t long before feel-good and fabulous films swished into view: The Adventures of Priscilla, Queen of the Desert (1994), Beautiful Thing (1996), and The Birdcage (1996), the highest-grossing LGBT-related film ever released in North America. They were celebratory, destigmatizing films about coming out and taking on homophobia — but in order to keep the now-familiar gay movie themes sounding fresh, they had to be set preferably in a public housing project or in the Australian outback. In drag.

By the noughties, gay movies had to resort to time travel to sustain the pathos. Brokeback Mountain (2005), Milk (2008), and A Single Man (2009) were all gay costume dramas, set in an age when homophobia was a life-and-death issue — and the gay movie wasn’t an exhausted form.

Fittingly, the end of the last decade also saw the release of I Love You Phillip Morris, with Jim Carrey and Ewan McGregor as unlikely jailbird lovers. It’s breezily casual about homosexuality — we see Carrey noisily buggering a man in the first few minutes of the film — and it refuses to offer the usual uplift or moralizing. The Aids death scene at the end of the movie, in which the con man played by Carrey cheats death, is an astonishing rebuttal to the mawkishness of Philadelphia. Our gay antihero lives, but in a sense the gay movie dies.

But perhaps the greatest proof of the genre’s demise may prove to be Mickey Rourke’s strenuous attempt to revive it. The 58-year-old plastic surgery devotee is currently making and starring in a biopic about 36-year-old gay British rugby star Gareth Thomas. Rourke read Thomas’s story of coming out in Sports Illustrated. “To be a man who plays rugby who is gay and to live with that secret for the amount of years that Gareth had… it takes a lot of courage,” he said recently. Rourke is clearly drawn to Thomas’s tale because it represents the final frontier of the Hollywood coming-out story: a gay guy in the gritty man’s man world of pro rugby. You can see the pitch: another Brokeback Mountain, but with communal baths, even more sheep, and a happier ending.

True, Thomas’s biography does offer plenty of conventional gay movie plot lines: While closeted, he prayed to be straight; upon coming out he dealt with an inevitable divorce from his wife. But Thomas himself is clear that he doesn’t want the film to be about his sexuality: “I don’t want to be known as a gay rugby player,” he said. “I am a rugby player first and foremost.” Adding, somewhat unnecessarily, “I am a man.”

In other words, he doesn’t want it to be a gay movie. And who can blame him? After all, it’s one thing to be played by a 58-year-old Hollywood actor when you’re still in your 30s. But it’s quite another to be trapped inside a 50-year-old and now defunct movie form.

The Unbearable Boredom of Brokeback Mountain