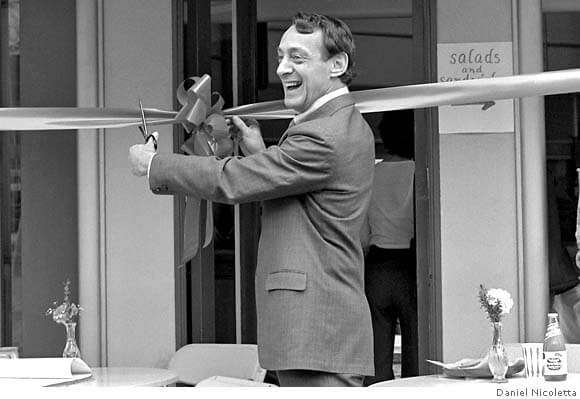 ‘If a bullet should enter my brain, let it destroy every closet door.’ So says Sean Penn as Harvey Milk, the gay activist who became California’s first openly gay public official. Any concern that this may be a slightly melodramatic statement is quelled of course by the knowledge that Milk was famously killed by a bullet to the head in 1978 by a disgruntled, possibly anti-gay colleague. So instead it becomes an epitaph – and this film’s marketing slogan.

Lauded by critics, laden with no less than 8 Academy Film Award nominations, including Best Film, and Best Actor, lavished with praise from editorials in straight and gay newspapers, director Gus Van Sant’s Milk, recently released in the UK, is, everyone agrees, that avenging ricochet from Harvey’s skull shooting down prejudice, fearfulness and dishonesty.

There’s only one small problem, however. It isn’t. With award-winning hypocrisy, Milk actually bundles Milk’s sexuality out of sight. This movie, far from ‘destroying every closet door’, builds a brand new bullet-proof one around its subject’s sex-life. Milk you see is living a lie.

Likewise, apart from one safely post-coital moment, Mr Milk is allowed one brief, badly lit, giggly heavy petting scene in his bedroom (the one place where probably no one had sex in 1970s SF) – filmed in long shot from another room. I don’t really have any great interest in seeing Sean Penn shagging in close up (ten or fifteen years ago it would have been a different story), but given the reluctance of the film to acknowledge Milk’s real, radically libidinal lifestyle (you might just call it ‘slutty’) this just seems like more coy emasculation. Come out, come out wherever you are – but only if you’re decent.

Apparently a bathhouse scene was filmed, but it ended up on the cutting room floor. I have no idea whether this was Van Sant’s call or the studio’s, but with that snip Mr Milk was effectively spayed. Many gays and liberals are indignant that Milk didn’t win a Golden Globe this January, but they should be more concerned the movie has no balls.

So why did it happen? Why is the ‘closet-busting’ film about Harvey Milk so fearful of its subject’s own sex-life? His own masculinity? Well, partly because a glossing over of human details, especially in regard to sex, is what becoming a saint usually involves – even a gay one. But probably the main reason why his sexuality has been bundled back in the closet is because that’s exactly what today’s US gay rights campaigners are doing with gay male sexuality itself in their crusade for gay marriage. In order to try and persuade an unconvinced American public to support gay marriage under the rubric of equality, gay male relationships are being presented, rather disingenuously, as ‘just the same’ as male-female ones.

Van Sant and others have even suggested that if Milk had been released earlier it might have helped prevent the passage of Proposition 8 last November, which re-banned gay marriage in California. Personally I think that’s absurdly far-fetched, but the wishful-thinking involved does give you some idea of how Harvey’s actual lived life has been appropriated to current political expediency. Just as the campaign for gay marriage is sometimes more about respectability than equality, Mr Milk’s historical sexuality wasn’t respectable enough for his hagiography. So it was surgically removed.

It’s impossible of course to know what Milk’s own attitude towards gay marriage would be today if he had lived – though whatever you do don’t mention that to the gay marriage zealots who have installed him as their patron Saint – but it’s pretty clear that while he was alive he believed in relationships as open as his closet door:

‘”As homosexuals we can’t depend of the heterosexual model”,’ Randy Shilts quotes him as saying in his biography The Mayor of Castro Street (a book which also documents how many of Milk’s political and community contacts were forged in bathhouses). ‘We grow up with the heterosexual model, but we don’t have to pursue it. We should be developing our own lifestyle. There’s no reason why you can’t love more than one person at a time. You don’t have to love them all the same. You love some more, some less and always be honest about where you’re at. They in turn can do the same thing, and it opens up a bigger sphere”.’

When I tell you that middle-aged Milk was explaining to one 24 year-old lover in San Francisco why he had another even younger one in Los Angeles you may decide you find this view self-serving. You may find it inspiring. You may find it naïve. Or courageous. Or immoral. Or realistic. Or corny.

What’s not debatable however, is that this is how he lived his life and created his politics.

But you won’t find it in Van Sant’s pasteurised Milk.