Bond on a Budget: Quantum of Solace is Plenty Cheap 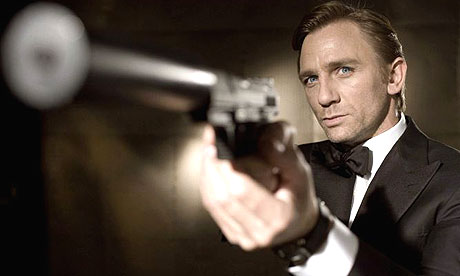 ‘I’d rather stay in a morgue!’

So sniffs Daniel Craig in the latest Bond vehicle Quantum of Solace when presented with less than salubrious accommodation in La Paz, Bolivia. Instead of checking in, he sweeps off to a flash five star Wallpaper magazine hotel even more preposterous than his new movie’s title.

The audience at my local cinema seemed to mistake this sniffiness for quippiness and giggled nervously – perhaps out of desperation for any gags or relief at all in this morgue-like movie that I for one was very sorry I’d checked into: a couple of deathly hours that felt like a very long dark night of the soul indeed.

So yes, I’m feeling a little bitter and jaded, not to mention used and abused – and not in a good way. So bear with me while I get pedantic on Mr Bond’s perky ass, strap him into a rim-chair and aim a knotted rope at his nuts.

For starters, ‘morgue’ is an Americanism, and Bond is meant to be a very British kind of action hero in a very British franchise. 007 resorting to such lazy transatlantic tics is tantamount to the Queen greeting heads of state with WASSSSUP! and a fist-bump. Adding hypocrisy to inaccuracy, this film has some very creaky anti-Americanism in it – tempered, equally creakily/cynically, by a ‘good guy’ CIA man with dark skin who is clearly meant to be Obama in a trenchcoat.

Worse, the ritzy hotel Craig checks into instead of the dowdy down-market one he’d been presented with has a cold, impassive, glossy magazine black and white décor that looks much more like a mortuary than the one he sniffed at. And in fact it ends up one: a dead body is placed on his swanky bed later in the film (dipped in oil, a jarring, ill-conceived visual reference to a much superior, gloriously trashy film from another century, another civilisation: Goldfinger – black gold, geddit?).

I’d like to think that the deathly boutique hotel was a deliberate commentary on the morbidity of consumer culture, but given the murderous lack of wit on evidence in this undead movie I suspect it was rather unintentional. Likewise, the way that the cancellation of an AWOL Mr Bond’s credit card by his MI6 Sugar Mummy Judi Dench is presented as one of the worst chastisements possible, almost on a par with losing his girlfriend in the last movie.

Perhaps the most unforgiveable thing about a film as expensive as Quantum is its cheapness – a cheapness it thinks is ‘seriousness’. If Quantum is a hotel, then it’s one of those fashionable ones that charges you the earth but doesn’t bother to change the bedding. The destruction of the villain’s lair sequence at the end, which should look orgasmically expensive, instead looks like something papier-mache exploding in a sub-par episode of Thunderbirds (come to think of it, Craig does walk like a Thunderbird…). Cheaper still is the use of Sony product placement instead of Q’s gadgets: show us something we can’t buy, please.

Cheapest of all is the quick-cut editing used during ‘action’ sequences, such as the car chase which opens the film. Instead of extensively storyboarded, carefully choreographed and laboriously shot fights and chases presented for your lazy, scopophiliac enjoyment, you get a blur of bad editing that is literally unwatchable on a big screen unless you enjoy the sensation of your eyeballs bleeding. An episode of Top Gear is much better shot than Quantum. Actually, even the made-for-TV ads that appeared before the film, crudely blown up for cinema, are better edited. Because you can see bugger all, this kind of editing could make John Sergeant look like an action hero.

Tellingly, the last Bourne had the same infuriating jump-cut mania. And while Casino made a superannuated Bond franchise look like he’d got his mojo back from the less stuffy American Bond rip-offs like Bourne, Quantum just looks like a more tedious, lower budget – more ‘morgue-like’ – Bourne Identity.

At least Craig gets his tits out again – though only once, during the film’s only sex scene (and of course, this being the new out-and-proud metro-Bond we see much more of his tits than his lady friend’s). But the flash of his tits is almost as cursory as his terrible seduction line: ‘I can’t find the stationery. Perhaps you can help me?’ A chat-down line almost as resistible as this movie.

Though maybe he was being serious. Maybe Craig, who can act when given the chance, had decided – since no one else had bothered – to write himself some lines and a plot.

By far the best, sexiest and most luxurious scene from Quantum doesn’t appear in the film at all. It’s the Sony HD ad that has been running on heavy rotation on telly for the last few weeks which portrays a well-tailored, well-groomed, cheek-sucked Craig as a kind of CGI Saint Sebastiane, lacerated by slo-mo explosions. He doesn’t say anything, just shares his pale blue masochism with us.

At under a minute and free of charge it’s the better Bond not by a quantum but by a country mile.

The Magic Position by Patrick Wolf