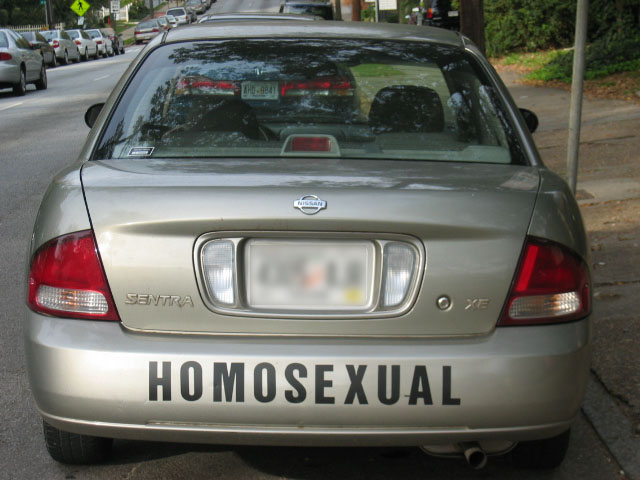 It’s official. The scientists have finally proved it. Gay men are as bad as women.

Or as the Daily Mail puts it in a somewhat unnecessarily long headline: “Gay men are as bad at navigating as women“.

The Daily Telegraph headline was a little more direct: “Women and gay men are ‘worst drivers‘”.

Actually, this wasn’t what the researchers into spatial learning and memory at Queen Mary’s (no, really, that’s actually their name) College claimed at all, but I say why allow the facts spoil a good headline? Or Jeremy Clarkson column?

What the researchers did actually claim however was that both gay men and women appear to “share the same poor sense of direction and rely on local landmarks to get around”.

That would be cottages and shoe shops, I suppose.

According to the Mail, a study of 140 straight and gay, male and female “volunteers” by Queen Mary College, London claims to have found that “gay men, straight women and lesbians navigated in much the same way and shared the same weaknesses.” For South American Chardonnay and men’s buns, perhaps?

But hang on a minute. And lesbians? What are they doing lumped together with gay men and straight women? I thought that if gay men are women trapped inside men’s bodies, lesbians were supposed to be trapped inside an articulated lorry cab with their feet on the dashboard smoking roll-ups.

But as you read on it dawns what this sophisticated psychological test was really assessing. “The Queen Mary team, led by Dr Qazi Rahman, used virtual reality simulations of two common tests of spatial learning and memory developed at Yale University.”

In one, the Morris Water Maze (MWM) test, volunteers were placed in a “virtual pool” and had to “swim” through a maze to find hidden submerged platform … The other task, the Radial Arm Maze test (RAM), involved finding “rewards” by exploring eight “arms” radiating out from a circular central junction. Four arms contained a reward and four did not, and participants had to avoid traversing an arm more than once.

Well, maybe it’s because I’m gay and dizzy, but you’ve lost me already. I want to log on and hunt for meaningless sex for hours via my scores of online profiles. You can keep your rather tedious reject Xbox game.

There may well be generalised differences between men and women when it comes to driving or other spatial based activities, such as computer games (men seem to play them rather more than women, though often with straight men this appears to be a way of getting away from women). And these may well have some relationship to sexual orientation, though what we mean by sexual orientation is a question in itself – after all, bisexuals are not mentioned in this survey. But it doesn’t appear that this study has shown it – instead it has merely shown up some cultural prejudices (e.g. that Telegraph “worst drivers” misleading headline).

Perhaps though the disoriented gay men in the study weren’t gay men at all, but pissed-up fruit flies escaped from another scientific study published this week, which claimed to show that alcohol produces “homosexual tendencies” in male fruit flies. The researchers claimed the amorousness the flies showed one another after repeated exposure to alcohol is a model for how alcohol lessens inhibitions in humans.

I suspect this is one claim that isn’t terribly controversial.

It has been pointed out to me since this piece appeared that Dr Quazi Rahman, the man behind the study which claimed to have ‘discovered’ similarities between gay men and women’s brains, is the author of a book called ‘Born Gay’. If only snarky commentators like me could learn to be as objective as psychobiologists.