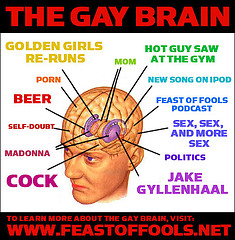 “Brains! Give me gay brains!”

So the global media has been moaning this week, arms outstretched and flailing, sightless eyes staring fixedly ahead.

You can hardly have missed this story.

We’ve been here several times before, most recently with the story about ‘gay drivers being as bad as women’, but the press clearly can’t get enough of this kind of ‘gay science’. Especially when it appears to confirm the popular, consoling and time-honoured view of gay men as women’s souls trapped in men’s bodies.

The only intelligent piece I’ve read on this story was by Mark Liberman, kindly forwarded to me by my friend David Halperin. It debunks the headlines about ‘gay brains’ rather, er, brainily.

It’s also worth pointing out that, as is usually with this kind of brain research, these differences – if they exist rather than being an artefact of sampling – have not been shown to be innate. The brain is ‘plastic’ and the differences in size could have been in effect ‘learned’, or be the product of behaviour and not t’other way around. That’s to say, shopping for shoes and salad with gal pals might increase the part of your brain that ‘processes emotion and language’. If this rather important proviso was mentioned in the news reports at all, it was right at the end.

And of course, you only have to think for less than a minute about the claim that gay men and straight women have the ‘same brains’, especially when it comes to the area that ‘processes emotion’, to see a major flaw with this apparently ‘common sense’ finding. I mean, how many hetero women – or lesbians – have the same attitude towards emotion-free sex that gay men have?

Far more significant than the findings of the research was the way it was reported. As Liberman points out, none of the stories headlined with ‘Lesbian brains are the same as straight male brains’. Almost all of them were a variant of ‘Gay male brains the same as heterosexual women’s brains’

To be fair, most of the research in this area isn’t terribly interested in lesbians either. That’s because the problem that needs to be explained from a biological determinist point of view, is human males who don’t impregnate women – which is what ‘male’ means to such people – and instead, in their view, try to impregnate other men, or, worse, be impregnated by them. Women, on the other hand, only exist to be impregnated from a biological determinist point of view, so their ‘orientation’ is largely irrelevant.

Which should tell you all you need to know about biological determinism.

Gays who hope that this kind of research will deliver them from the ‘it’s a choice’ religious right and ‘it’s unnatural’ homophobes are possibly jumping out of the moralist frying pan into the eugenic fire. Of course, they wouldn’t be the first. Magnus Hirschfeld (and also Karl Ulrichs) the ‘father’ of the modern gay rights movement believed that homosexual men were women’s souls trapped inside men’s bodies. Homosexuals should not be persecuted and criminalised, in Hirschfeld’s view, because they couldn’t help themselves, and, more to the point, as women trapped inside men’s bodies, they weren’t really homosexual at all – they were congenitally confused heterosexuals with a hormonal imbalance. When they had sex with another male they were trying, in their own ‘crippled’ way, to be faithful to their heterosexual impulses.

Then along came the Nazis, who largely agreed with Hirschfeld about crippled, congenital homosexuals not being real men, but had a rather different view about what this meant – i.e. degeneracy – and, of course, what to do about this. Which, in addition to concentration camps, included operating on them to find the causes of their hereditary weakness, and injecting them with massive quantities of male hormones (though the latter of course is something many gays pay good money for these days).

Human sexuality is far more perverse and cunning and kinky than poor square old biological determinists can ever accept, because for them heterosexuality is necessarily the same thing as reproduction which is the same thing as sex. When much of human culture has been very energetically and ingeniously devoted to making sure that these things aren’t the same.

In a sense, homosexuality represents one of the crowning (over-) achievements of that energy. And perhaps that’s the very reason there remains such an intense, curious, and sometimes murderous, ambivalence about it.  As shown by the countless and continuing attempts to explain it away.