The Times of London’s cartoonist, like most cartoonists and journalists, has been strangely unable to produce anything even vaguely critical of the Senator from Illinois, while going to Hating Town in Hate Week on the Senator from New York, Hillary Clinton.

But today he – and it is a he, a white he – finally managed to actually produce an unflattering portrait of Barack Obama: 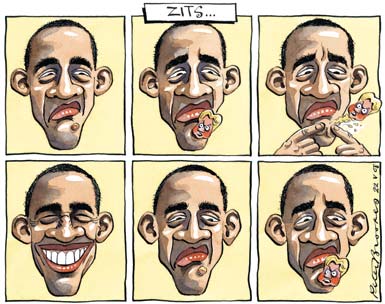 The only unflattering part of it though is that white ‘bitch’ – who is, apparently, just unsightly pus. But then this represents an upgrade: a couple of weeks ago in the London Times she was a corpse.

I wonder though whether that angry ‘zit’ doesn’t also represent the liberal media class’ view of the white working class, the people who keep handing Hillary huge victories and Obama stinging defeats, and whom the media and the Obama camp (which are in fact, and in class, pretty much the same thing) keep trying to squeeze out of the news and out of respectable society by dismissing them as ‘ignorant’ and ‘racist’ and ‘bitter’.

Trouble is, without this unsightly pus, without this throbbing zit on the handsome face of polite liberal well-heeled metropolitan society, no Democratic victory in November is even imaginable.

Speaking of unimaginable, as with The London Times’ wish-fulfillment image of Hillary face-down with an American state in her back, it’s inconceivable that this cartoon could be reversed and Obama the black man portrayed as a angry zit on white Hillary Clinton’s face.

I mean, that would be racist, wouldn’t it?.

Queer Eye of the Tory Guy Headed For Number 10