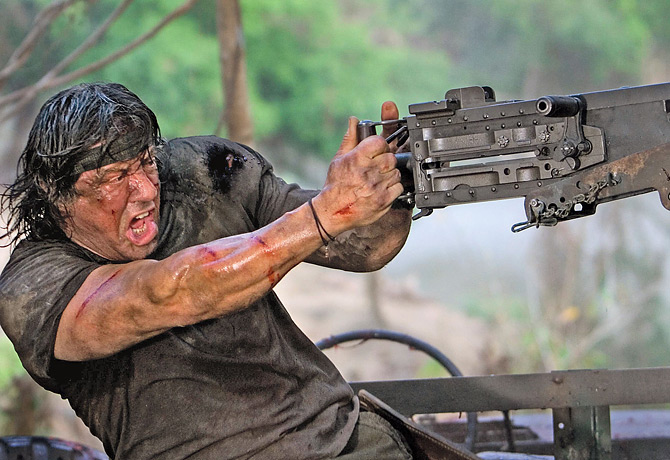 Stallone is back! Again! Even bigger than last time!

After the success of last year’s musclebound Rocky 60, he’s now promoting his latest inflatable eighties revival movie franchise, Rambo – you know, the one that President Bush based his foreign policy on. (Though Stallone, perhaps with a Sly eye on public opinion, claims his new movie is anti-Bush and anti-war).

This week’s Time Magazine reports, buried coyly on page two of the article, on the one special effect in Sly’s widescreen comeback that moviegoers are most interested in: what drugs did he take?

Playing a guy who acts with only his eyes and his biceps is harder than playing a fast-talking, earnest boxer, especially on a 61-year-old body. Which was one of the reasons Stallone wanted to do it. He pumped up to a freakish 209 lbs. (95 kg); in Rambo II he weighed only 168 (76 kg). And, he insists, he did it without steroids, though with the help of a prescription testosterone. “HGH [human growth hormone] is nothing. Anyone who calls it a steroid is grossly misinformed,” he says. “Testosterone to me is so important for a sense of well-being when you get older. Everyone over 40 years old would be wise to investigate it because it increases the quality of your life. Mark my words. In 10 years it will be over the counter.”

Sadly, Stallone is the one who is ‘grossly misinformed’ – or more likely, delusional. Perhaps because of all the STEROIDS he’s been taking since the 1980s.

Human Growth Hormone – the illegal importation of which Sly has been charged with in Australia – is only really effective as an anabolic agent when taken, as Stallone has done, with synthetic testosterone. Which is, whatever Sly likes to think, an anabolic steroid. Even when it is supplied by your tame doctor rather than a dodgy dealer down the gym.

The one thing he’s right about though is that in ten years all men will be on steroids, including HGH, and appearing in Falcon videos.

Let’s pray they don’t use the same plastic surgeon as Sly and his mother, Jackie. 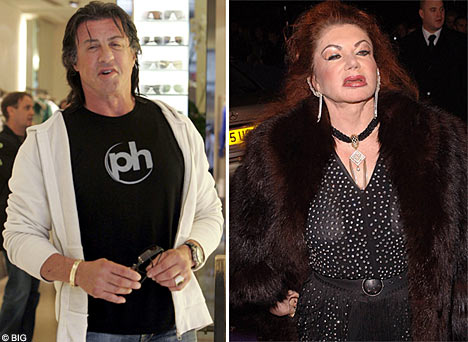