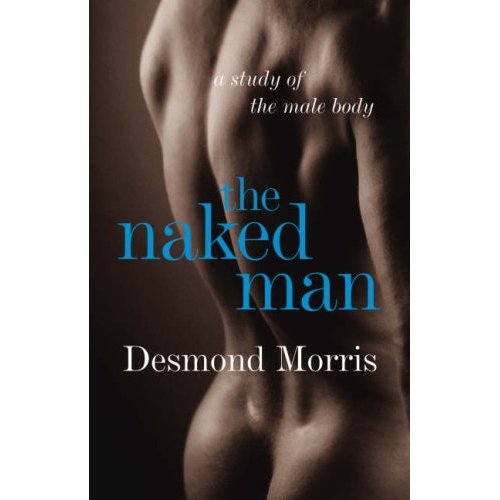 Every child wants to be a zookeeper when they grow up. To run a place where everything is in its place, and has nothing to do but eat, shit and breed – to your timetable. Maybe it’s a yen for revenge on the parents who brought them into the world without asking their permission first, or maybe it’s just because children are all little dictators with a peaked-cap fetish.

Most though abandon these zoo fuehrer dreams when they actually grow up. Not so Desmond Morris. Impressively, this former curator of mammals at London Zoo, doesn’t make do with animals: with best-selling books such as The Naked Ape and Manwatching, this world-famous zoologist has managed to become head keeper at his very own human zoo.

And to be honest, the world evoked in his latest book The Naked Man, ‘a study of the male body from head to foot’, sounds like a place I’d quite like to visit – but only because I’m something of a nostalgic.

Morrisland isn’t just a zoo, you see. It’s also a historical theme park. In Morrisland, millions of years of evolution, red in tooth and claw, have brought us right up to… the suburban 1950s (the decade Morris graduated). In Morrisland ‘long-term pair bonding’ is the universal norm and there’s no need for a Child Support Agency or Asbos or turkey-basters since: ‘Powerful paternal feelings are unleashed the moment a human father holds his new baby in his arms and in the years ahead he will devote a great deal of time and attention to the rearing of his offspring.’

In Morrisland, where everything happens according to the zoo-keeper’s plan, women are 7 percent shorter than men so that their nose will reach inside a man’s hairy armpit, because sniffing his manly, rugged ‘pheromones’ makes her happy and want babies. And, of course, no Western man would shave his armpit. Only ‘members of the homosexual community or the bondage/sadomasochistic communities’ would do that.

By far the biggest attraction in Morrisland is sexual certainty. Within this fenced-off space the distinction between ‘masculine’ and ‘feminine’, ‘homosexual’ and ‘heterosexual’, is unclouded by all those unnatural modern trends. ‘As nature intended’ is a favourite phrase, one which appears above the entrance gates. In Morrisland, men are men – and there’s a strict golf club dress code. ‘Acceptance of male earrings still tends to be limited to those worn by the younger, more flamboyant males, largely from the world of sport, music and showbusiness,’ you’ll be glad to hear. Male bracelets are simply effeminate. And men only shave their legs – ‘sacrificing their masculinity’ – to swim or cycle faster.

In today’s fallen world, an older man might be called a ‘slaphead’ by unruly yobs – but safe inside Morrisland you’ll find yourself properly respected: ‘it is obvious that baldness is a human display signal indicating male seniority and dominance. It typifies the virile older man…’ (There’s no author photo on the dust-jacket, but a quick Google search confirms that Desmond is completely ‘virile’.)

There is trouble in the Garden of Desmond, however. Apparently ‘A few men – narcissist or masochists – have opted for nipple rings.’ But at least it’s only ‘a few’ – and they’re all deviants. Meanwhile, serpent-like ‘Gay designers’ ‘ignoring male preferences’ attempt to introduce ‘effeminate new leg fashions’. Fortunately, these fashions prove as sterile as the gay designers themselves: ‘they may have looked amusing on the catwalk, but they have never made it to the high street. Crumpled trousers and grubby jeans still reign supreme in the world of the manly male.’

In Morrisland there does exist however something called a ‘‘six-pack’ chest’ – though ‘few are prepared to make the effort to create it.’ Perhaps because a ‘six-pack chest’ would require not just regular visits to the gym, but also substantial surgery.

Surprisingly, that terrifying 21st Century male phenomenon I’ve been blamed for siring myself – metrosexuals – are allowed in Morrisland. But only those whose heterosexuality is beyond question and ‘are well-known as tough, masculine sportsmen and as famous celebrities… so, for them to become fastidious and fashion-conscious creates no confusion.’ Well, that’s a relief.

Non-celeb metrosexuals don’t exist in Morrisland, because ‘if an unknown heterosexual male were to display over-groomed, narcissistic tendencies, his sexual preferences would be automatically misread by anyone who met him.’ Which would, it goes without Mr Morris saying, be the worst thing that could possibly happen to a man and would render him completely emasculated and ridiculous. ‘This limits,’ explains the human zoo-keeper, ‘the metrosexual category to famous celebrities who are already publicly recognised for their heterosexuality.’

Clearly, not many of those High Street sales of male cosmetics which have increased by 800% since the year 2000, have been made in Morrisland. Though I do worry that the cover model for Morris’ book, an anonymous, headless, naked, smoothly muscular, young male photographed from behind in that sensuous-shadowy advertising sex-object way – offering us his arse – has been bingeing on metrosexual products. I sincerely hope his heterosexuality is already very publicly recognised.

As you may have guessed, Mr Morris has a problem with homosexuality. Throughout his book ‘manly’ means ‘heterosexual’, unmanly means ‘homosexual’ – and vice versa.

But it’s not a personal problem, it’s a scientific one, you see. In a final chapter called ‘The Preferences’ devoted not in fact to the preferences but rather to explaining/pathologising male homosexuality, he writes, ‘Viewed purely from an evolutionary standpoint, there is only one valid biological lifestyle for the human male and that is heterosexual.’ In other words, evolution, like zoo-keepers, doesn’t like waste and wants you to reproduce early and often.

But I can’t help but wonder why, if God/Darwin/Morris didn’t want men to get shagged, why did he give them such itchy prostate glands? And if every sperm is sacred, why did he put their hands at crotch level?

Des’ explanation for exclusive homosexuality (exclusive heterosexuality needs no explanation apparently – and bisexuality isn’t discussed) is, like much else in his book, charmingly mid-Twentieth Century: at puberty some boys fail to move out of the long all-boy social phase of childhood – and also boy-boy ‘sex play’ – and switch into dating girls and home-making, because they have become ‘too attached’. I personally don’t mind the arrested development explanation of homosexuality: I think it rather romantic (like Morris, I attended a boy’s boarding school). I’m not entirely sure though that I’m that much more immature than someone who never gave up wanting to be a zoo keeper.

In conclusion, Morris makes a final impassioned plea for tolerance and acceptance of difference and human variety: ‘Isolating homosexuals as though they are members of some exclusive club does them no favours’.

So true. Unfortunately, this is exactly what the The Naked Male does. Morris’ human zoo separates ‘homosexuals’ and ‘heterosexuals’ with barbed wire – and electrifies the fence.

Manlove for Ladies on Torchwood