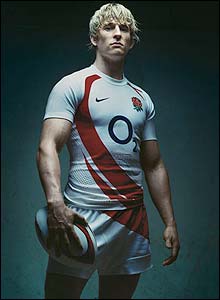 What’s more, it has an added sash/arrow plunging from armpit down to large, firm thigh, as demonstrated by the very lovely young David Strettle, pictured left (snapped dancing on a spotlit podium at Heaven nightclub). Is it just me, or does it seem to shout: ‘If You Wanna Score – Flip Me Over!’?

Apparently the new strip’s ‘asymmetric’ design will confuse opposing players. I could make the obvious joke that they won’t know whether to tackle them or kiss them. But then, why can’t you do both? (I certainly find this a very effective tactic with rugby players myself.) The way things are going it can only be a matter of time before this approach becomes compulsory.

So instead I’ll point out that if there’s any truth to the science of eye-tracking, which suggests that most men like to look at other men’s packets rather lingeringly, our opponents’ main confusion with that ‘dressing to the left’ pendulous arrow will be working out where to actually locate our boys’ tackle.

[See how the meaning of ‘rugby shirt’ has changed over the years from ‘baggy beer towel’ to ‘gay disco cocktail top’.]

The ballad of Sitges gaol