Mr Humphreys is no longer with us. He has been transferred to another department. One that even the cheery Grace Bros. lift – forever ‘going up!‘ – cannot reach.

Comic actor John Inman, best known for his portrayal of the flamboyant shop assistant in the 1970s British sitcom ‘Are You Being Served?’, finally got ‘promoted’ last week, aged 71.

The Great Floorwalker in the Sky tapped him on the shoulder and asked him if he was ‘free’.

Let’s hope there are lots of divine inside legs for him to measure in the Heavenly Menswear Department. Even if he still doesn’t have a key to the Executive Washroom.

Set in Grace Bros., a fading London department store, and written by Britcom legends David Croft and Jeremy Lloyd, ‘Are You Being Served’ ran for thirteen years from 1972 to 1985. It was lambasted at the time for its creaky scripts, smutty humour and abject reliance on crude double entendre – e.g. ‘Captain Pee-COCK’, ‘Mrs Slow-CUM’, ‘Miss BRA-hms’, and of course, ‘Mr HUMP-free’. Many critics wondered why Auntie was airing such off-colour trash.

I loved it. As a lad in the 1970s I never missed an episode, practically wetting my grey school shorts every time. It made me the man I am today. So perhaps it should have been banned after all.

What’s more, history, not to mention ratings, were on my side. This low-rent, gutter humour was, it is clear now, the golden apogee of the Great British Sitcom: an astonishing 22 million people tuned in for a 1979 episode of AYBS – half the population of the country at the time – just to have a titter at Mrs Slocombe’s tired old pussy. As I observed in an article for the Independent on Sunday about the death of the British sitcom in 2000 (posted below for anyone interested in its obituary), AYBS managed to encapsulate an era:

Lloyd and Perry’s peerless BBC sitcom ‘Are You Being Served?’ WAS the British 1970s. Everyone is fed up, everyone is skiving, everyone is seething with resentment and nobody is ‘being served’, in either sense of the double entendre. Except the ancient, filthy rich Mr Grace who is probably impotent and the camp poof Mr Humphreys who lives with his mother. So palpable is the frustration that Mrs Slocombe’s pussy has a life of its own.

As I got older I did wonder about Mr Humphreys. First as ‘one of them’ and then, slowly, as ‘one of us’. Though like many if not most homos growing up at that time Mr Humphreys was one of the reasons why I thought I couldn’t possibly be ‘one of them’. Inman’s flamboyantly effeminate powder-puff Mr Humphreys (along with Generation Game host Larry Grayson) practically defined male homosexuality in Britain in the 1970s – and in fact to this day if you read the tabloids.

The Sun newspaper has a house rule that you can’t refer to a male homosexual without putting the word ‘camp’ in front of their name or profession. Pretty much the only way you can avoid the giggly moniker preceding you and your achievements if you’re a famous homo in the UK is to become a rapist or serial killer. Which seems to me like a lot of trouble to go to just to be taken seriously.

Inman’s skittish, swishy portrayal was attacked at the time by gay rights activists, but with the comfortable wisdom of hindsight this seems like tilting at lisping windmills. After all, everyone at Grace Bros. were caricatures. What’s more, Mr Humphreys was a likeable caricature – and the only person, aside from Mr Grace, who was allowed to have any fun.

The protesters’ point I suppose was that Inman was part of the general portrayal of male homosexuals in the culture as being emasculated irrelevant creatures. But then, after all these years of gay lib, gay rights and gay respectability we have…. Graham Norton. Someone loved by gays, apparently. Compared to Norton, three decades old Mr Humphries is no more ‘masculated’, somewhat less irrelevant and rather more like a recognisable human being. What’s more, he’s actually funny. Norton on the other hand seems to do most of the laughing himself, but then I would if I was paid that much. He is however ‘out’.

For his part Inman always denied his character was homosexual, as did the writers. Inman himself announced in 1999 that he had been straight all his life and that he had been involved in a ‘serious relationship’ with a woman for 28 years. Reportedly, no one was more surprised than his friends – and none of them had any idea who this woman was.

I suppose though that was the whole point of double entendre. It was knowing at the same time as innocent – double entendre was deniable entendre. Smut without responsibility. Sniggering connotation without serious denotation. In other words: it wouldn’t upset your dear old mum.

‘I’m free, Captain Peacock!’ Free for a spot of gratuitous symbolic humping. Free for some good old fashioned tittering. And free also of any tedious political statements – or definite meanings. But probably not free, alas, of sexual guilt.

In other words, ‘double entendre’ may be French in origin, but it’s very, very British. 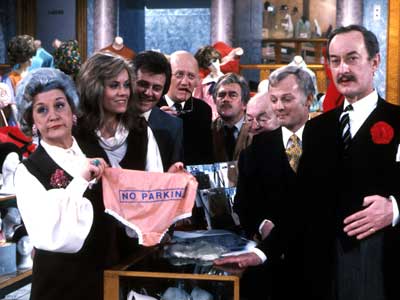 DEATH OF THE BRITISH SITCOM

Here is the news: “I don’t belieeve it!”

Everyone must know by now that to fill the gap left by the demise of that timeless national institution The Nine O’Clock News the Beeb is bringing back the nation’s favourite misanthrope Victor Meldrew for one last marvellous moan. This is, we are told, the very final series of ‘One Foot in the Grave’ and to make sure of this, Victor actually dies and is buried six feet under in the final episode. Which will probably come as something of a relief for him since it is, after all, what he has been waiting for impatiently ever since the series began in 1990.

However, when Victor finally draws his last, indignant, muttering breath it will be nothing less than a national catastrophe. It won’t just be Britain’s most lovable miserable old git that we lose but an institution once as important as, well, the Nine O’Clock News. For years now it’s been clear that the great British sitcom has also been in retirement, waiting for death. Victor is its last gasp.

You don’t have to be a UK Gold subscriber to know that the sitcom has been in decline ever since the 1970s – the Golden Age of the BBC and also of Victor and Anne (probably the last time they had sex – albeit with the lights off). Then they lived a cheaper street or two from ‘The Good Life’s’ Tom & Barbara, and a few doors up from ‘Terry and June’, holidaying every August at ‘Fawlty Towers’, where Victor and Basil got on famously. And it’s glaringly obvious they bought most of their current wardrobe at young Mr Grace’s department store.

The 1970s was such a rich era for sitcoms and the Beeb because sitcoms were indispensable back then. Everyone was bored, frustrated and repressed. Nowadays there are plenty of things to do – whether it’s Playstation, taking drugs, casual sex, remodelling your home, watching cable TV, surfing the Net or making money. (They may not be things worth doing, but they certainly occupy people’s time.)

Sitcoms reflected back that world to their captive audience, in grotesque and liberating parody. Croft and Perry’s peerless BBC sitcom ‘Are You Being Served?’ WAS the 1970s. Everyone is fed up, everyone is skiving, everyone is seething with resentment and nobody is ‘being served’, in either sense of the double entendre – except the ancient, filthy rich Mr Grace, who is probably impotent anyway, and the camp poof Mr Humphreys who lives with his mother. So palpable is the frustration that Mrs Slocombe’s pussy has a life of its own.

As the rigid hierarchy of the doomed department store demonstrated, Seventies Britain was paralysed by class. Sitcoms made fun of hopeless aspirations: in ‘Rising Damp’, everyone is trying to climb the greasy pole and desperately position themselves above each other, but as the name suggest, the only thing that is rising is the moisture problem. In the 1980s the arrival of the grocer’s daughter Mrs Thatch and her loyal supporter Essex Man changed all that. However, before the loadsamoney culture got underway, high unemployment offered some sitcomic potential. ‘The Young Ones’ featured epic amounts of boredom and frustration (they were meant to be students, but in those days students were unemployable),

As the economy picked up, unemployment queues dwindled and social mobility went into overdrive, sitcoms had to resort to time-travel to find boredom and frustration. Croft and Perry retreated to the safety of a joyless, regimented 1950s holiday camp in ‘Hi De Hi’; Mr Blackadder in class-ridden, VCR-less Jacobean England, or the aspiration-less mud of the trenches of the First World War. The North-South divide offered sitcom makers less costly time travel by simply motoring up the M1 (‘Bread’ and ‘Last of the Summer Wine’). But if you couldn’t escape Essex Man, you had to make him affectionately inept (‘Only Fools and Horses’).

By the Nineties most of the younger generation had been lost to the smart-Alec, exhausting wisecracking style of the American sitcom: for them Channel Four’s line-up of ‘Cheers’, ‘Roseanne’, ‘Frasier’ and ‘Friends’ ruled the airwaves. The reason for the success of these American ‘lifestyle sitcom’ products was quite simple: post Eighties the British were no longer so repressed, no longer so class-bound, no longer so bored. No longer so… British.

To achieve a non-American sitcom success Channel Four had to take us to a priest’s tumbledown draughty house on Craggy Island. Only there could they be sure of boredom (it’s an island off Ireland), official frustration (priests are supposed to be celibate), and a rigid class system (Father Ted is forever trying to avoid kissing the Bishop’s ring).

It’s no coincidence that the Beeb is also marshalling ‘The Royale Family’ along with ‘One Foot’ to fill the Nine O’Clock gap. Almost uniquely for a recent BBC sitcom a great success and extremely funny. But then, Caroline Aherne and Craig Cash are hugely talented writer-performers, and the show is about a bored working class Northern family where there’s no hope and no serious aspiration – and no sex, except when someone’s ‘trying for a baby’ and Jim’s over-enthusiastic arse-scratching. Despite being nominally contemporaneous (they watch programmes like ‘Who Wants to Be a Millionaire?’), its real location is the 1970s of Caroline Aherne and Cash’s childhood. You can tell because everyone watches the same TV.

More to the point, ‘The Royale Family’ is not really a sitcom – it’s an observational comic drama of details which depends on a great deal of irony. It’s Bennetesque. The close-ups of the overflowing ashtrays, the endless bacon sandwiches, the sympathy for that strange, sad illness called vegetarianism. It all depends upon a we-know-better-now attitude. It’s the affectionate and nostalgic mild snobbery of a generation that, like Aherne, has ‘done well for itself’.

‘One Foot’, the last true and the last great British sitcom isn’t ironic. It is nostalgic, however, and more than mildly snobbish – Victor is supposed to be an ex-security guard, but he’s clearly BBC Home Counties middle class and his wife Anne talks like someone out of ‘Brief Encounter’. And, like the BBC middle class today, he has the voice of entitlement but no money, and is tormented by the uncouth C2s who have moved onto his close, with their wads of cash, drunken wives and their disrespectful kids.

Unlike Victor, who is thankfully too uptight and too set in his ways, they have sex, take drugs, play video games.

And watch SKY instead of the BBC.