A Little Bit of Give & Take

Originally appeared in Attitude magazine, October 1994 and collected in It’s a Queer World

IN GREEK MYTHOLOGY, Maenads were “frenzied women worshippers of Bacchus” who were inclined to “rend to pieces” unfortunate men who passed their way. They were known by their unearthly shrieking howl and wail – often the last thing a man might hear. Tonight the ancient noise floods the auditorium and makes my knees knock. Tonight a cyclone of screaming, whistling, whirling teen-girl frenzy is surging around me and quite unmanning me.

The entrance of the ‘lads’ is still some time away, but that doesn’t stop the girls exercising their vocal cords and advertising their appetite. They are hungry for masculine meat. Their banners proclaim their ravenous intentions: GIVE US A SNOG, ROB, and A QUICKIE IN THE DARKIE, MARKIE. To quote someone else from Manchester: They want it now and they will not wait, for they are too lovely and too delicate. I sink even lower into my seat. But I flatter myself – these girls aren’t interested in stringy old steak like mine; they want prime, pumped, waxed, tanned, moisturised boy-flesh.

Nevertheless I can’t help looking around for another male to cling to.  I spot a middle-aged steward guarding one of the exit doors. ‘I’m too seasoned to be scared, ‘ he says. (I think he means ‘experienced’ rather than ‘flavoured.’) ‘I’ve seen it all before with The Beatles. Now that was real hysteria. You had to stretcher out hundreds of fainting girls in those days.  We hardly get any now.’

But isn’t that just it?  Isn’t that exactly why we should be really, really scared? I mean, these girls are ball-busters; they’re in control. They’re not keeling over – they know what they want and they’re gonna stop at nothing to get it. It’s the men who are fainting now. ‘Well, some of their banners can be a bit explicit,’ admits the steward. ‘Some of them are too obscene to allow into the auditorium and we have to confiscate them.’ What sort of things do they say? He flushes red. ‘I can’t tell you that, I’m afraid’ he demurs hurriedly. ‘You’ll have to use your imagination.’

Unfortunately my imagination is already working overtime. From my lofty vantage point in the gallery, the arena looks just like the inside of the wrecked spaceship in Alien. Those rows of teeny-boppers look like the cute pods in the vast cargo bay that John Hurt got a little too close to. Lurking within each one of those diminutive schoolgirls is a ruthless appetite to consume the world just waiting to burst out. These girls – with their flashing red plastic horns (symbol of the ’94 tour), TT scarves, key-rings and slurpees – know that the teenybopper juggernaut of boy bands is just a lipsmacking taste of things to come.

The multimillion pound Take That road-show, bringing joy to thousands of young girls, is the prototype future economy of the Western World. Making these girls happy will become the economic imperative of the Twenty First Century. They are the consumer queens of tomorrow and capitalism will organise men, material and technology to pleasure them as long as they have cash to spend. These are girls who are becoming women in a world whose only use for men who don’t sing, dance, and flash their pert buns is lifting the amps on and off stage.

Lucy, Jane, Trish, and Caroline are demure sixteen-year-olds who have travelled from Swindon to see their heroes. They are chaperoned by Samantha, Lucy’s mum. ‘I can’t wait to see them get their kit off – PHWOOAAARRRRRRRRR!’ shouts Lucy into my ear. ‘What I wouldn’t do to them if I could get my hands on them!’ What about the other boy bands?  What’s so special about TT? ‘They’re just the best,’ yells Trish. ‘They really know how to make you feel good; they really try. Plus none of the others have got their sex appeal. They can dance, wiggle their bums, and sing – plus they’re VERY SHAGGABLE!’

Who’s your favourite?  ‘HOWARD!’ ‘ROBBIE!’ ‘MARK!’ ‘JASON!’ they all scream at once. ‘Mark’s brill ‘cos ‘e’s so short an’ sweet an’ lovely an’ ‘e looks like you could do anything you like to ‘im.’ ‘Howards’ ace ‘cos ‘e’s gorgeous, ‘cos ‘e’s got pecs, an’ ‘cos ‘e’s got a BIG PACKAGE – ‘e’s REALLY, REALLY, WELL-ENDOWED!!’ How do you know? ‘You can’t miss it when ‘e comes on stage!!’ they hoot. ‘It just about pokes yer eye out!,’ adds Lucy’s Mum, helpfully. Pardon me, but didn’t The Sun tell us recently that Mums were shocked by the new saucy TT show? ‘I am shocked,’ admits Samantha. ‘I expected them to get their kit off!!’ And what does your husband think of all this? ‘Oh, he’s quite into it. He does TT numbers in a thong after the pub on a Sunday.’

But the key question has to be, what do TT have that Swindon boys don’t? ‘MONEY!’ shouts one lass. ‘TALENT!’ another. Meanwhile Mum offers: ‘All the good-looking boys round our way are either married or gay.’

At last the boys make their much-anticipated entrance and the crowd ululates, trills and whoops, rising to a maelstrom of sound matched only by a squadron of Concorde’s taking off and exploding. The boys rise up from beneath the stage on a platform, clad in tech-noir army uniform – boots, grey tunics, and silver helmets – singing ‘We’re gonna make you feel so good.’ Toy soldiers played by toy boys. Perfect. A salvo of cuddly toys lands on stage, beginning a bombardment that lasts all night. (I can’t decide whether this is a sign of the girls’ initiation into womanhood, a putting away of childish things – or merely an exchange of one fluffy comforter for another.)

Like the troopers they are, the munchkins from Manchester skip, jump, and shuffle their way through their back-catalogue. The air is heavy with sweat, oestrogen, and Lily of the Valley. Girls are ignoring official exhortations not to stand on their seats, bopping their backsides off with a determination and energy that makes you wonder how much TT have to do with it. Yes, the boys are nice little movers, they do have some very catchy numbers, and they promise to ‘make you feel so good,’ but it looks like these girls are the sort who can take care of their own orgasm, thank you very much.

Halfway through the show the boys leave the stage for a costume change. A giant metal walkway covered in flashing lights descends. The boys re-enter in powder blue Sgt Pepper suits. The salute to the Beatles shows the boys’ determination never to disappoint their audience and grow up. They wont make the mistakes the Beatles made – they won’t desert pop for rock; they wont take drugs; they won’t get political and expect to be taken seriously; they won’t get married (OK, so Gary might run off with Elton John). TT are the Beatles as your Nan would like to remember them – all McCartneys and no Lennons.

Time is the greatest threat to passion and to boyhood. So the next number, ‘Babe,’ underlines TT’s postmodern mastery of it. A projection screen shows black-and-white film of VE Day celebrations and returning troops. Little Markie steps out of the screen (through an ingenious slit) wearing an RAF greatcoat with a kit bag slung over his shoulder, singing ‘Babe, I’m back again.’ Doesn’t it just make you want to hug him really, really hard till his little ribs crack and puncture his lungs? The message is clear: TT were always here, are always here, will always be here to ‘make you feel so good’.

Sentimentality dealt with, the boys turn their attentions to ‘sex’ in the second half of the show, changing in to black net shirts and hot pants – well, everyone except Gary, who’s still wearing trousers. What’s the matter with his legs? Are they just fat or do they betray signs of – God forbid! – secondary sexual characteristics?, i.e. hair? Can’t he shave them like Howard? Alas, Gary’s shyness about showing a bit of legs spoils the effect of the black net shirts. Less ‘sexy,’ more a carefully contrived compromise that allows you to glimpse Gary’s flesh but breaks up the lines enough to prevent you deciding whether he really is a pudding or not.

That the lyric they’re singing is ‘Give good feeling to me’ is not without significance. Now that ‘sex’ has replaced romance, the boys sing a passive version of their initial promise to ‘make you feel so good’. The girls do their best to satisfy the boys. They gasp like a cracked steam piston as TT offer themselves. They roar like Niagara in flood when TT thrown themselves down on the stage. They thunder their feet like stampeding buffalo as the boys slowly crawl to its edge and wail like a missile attack when TT stand up and thrust their hips at the crowd. When Howard takes of his shirt the screaming melts my earplugs.

As an encore, the boys perform ‘Pray’ in white smocks, looking very angelic with their hands pressed together and heads bowed. But after the song finishes they are dragged into ‘Hell’ by little devils. Then out of the pit comes Lulu in red, followed by the boys who have now been Satanised, wearing red horns – and, everyone except Gary, very little else – for ‘Relight My Fire.’ Howard is ‘wearing’ a black leather jockstrap and a pair of red chaps with his bum poking out the back, which he generously sticks out at the audience and slaps repeatedly. Gary, meanwhile, is clad in a blazer and flannels. Thus TT negotiate all the key dilemmas of girl teendom: virtue and sin, love and sex, rough trade or rich fat boys in blazers.

The grins on the faces of the TT boys are convincing and suggest that they might be enjoying themselves even more than the fans.  ‘Ree-light my fi-yer/Your love is my only dee-zeyr/I need your lurve/I need your lurve!’ They croon sincerely to Lulu, cavorting around her like kinky acrobats. It’s only fitting that the nearest thing to heterosexuality that these future mothers of our nation have witnessed all evening is pretty boys in bondage gear singing a gay disco classic to a middle aged camp icon.

So what do the Swindon mob make of the rumours that TT are gay?  ‘That’s just bollocks,’ they all agree. ‘People are just jealous of their success and want to bring them down,’ says Caroline.

And, hypothetically speaking of course, if they were gay, would it stop you chasing them? 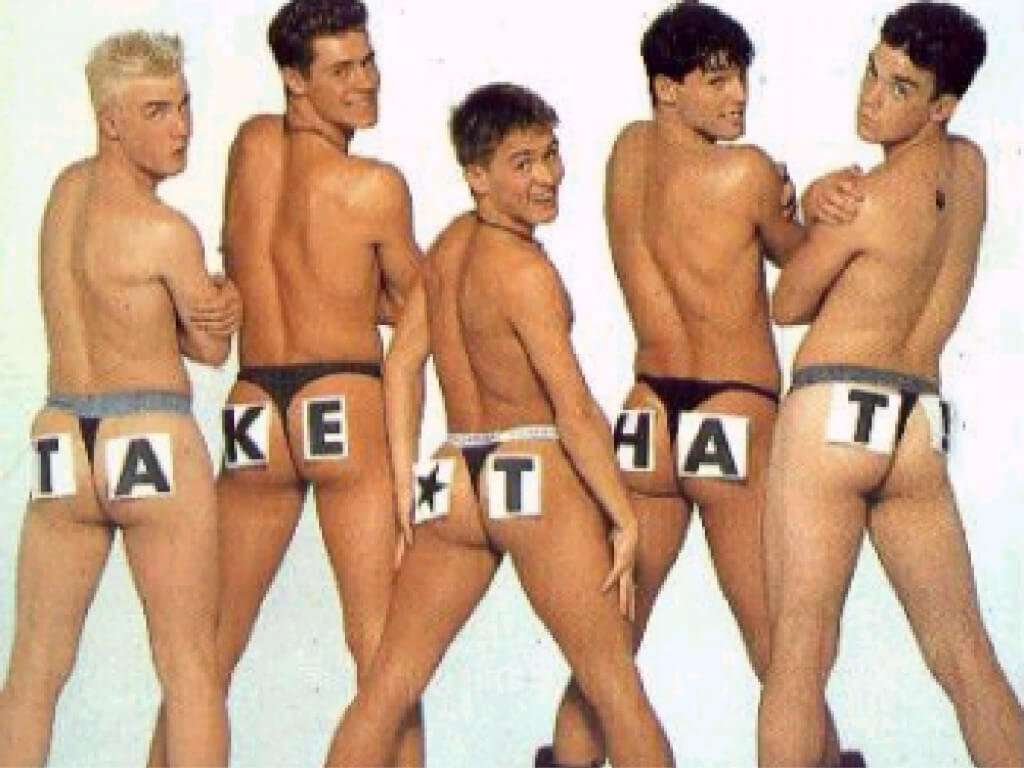